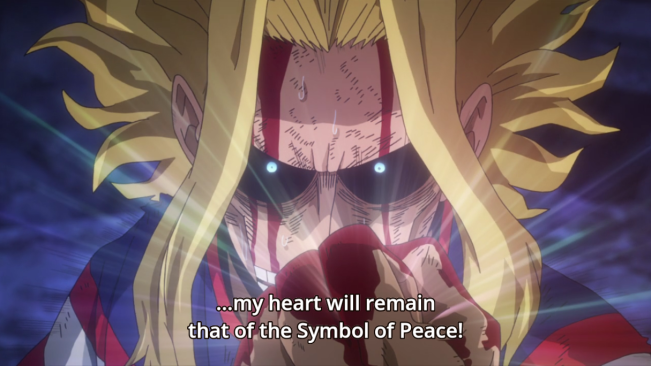 It is not the most creative episode of the series’ run, but it is (debatably) one with the highest of stakes. All Might versus All For One, with a definitive conclusion that will change the fabric of reality within their world. Karandi and I take in the repercussions of the episode’s ending minutes and spit out some thoughts.

Well, he died in some fashion. All Might has essentially used up all of his power, the population completely unaware of the implications surrounding his wound. Midoriya realized it immediately, the weight of becoming the pillar of peace being thrown at him despite not being anywhere as powerful as All Might was. This is perhaps the most powerful cliffhanger the series has ever shown, in terms of just how large a fall said cliffhanger leads to. 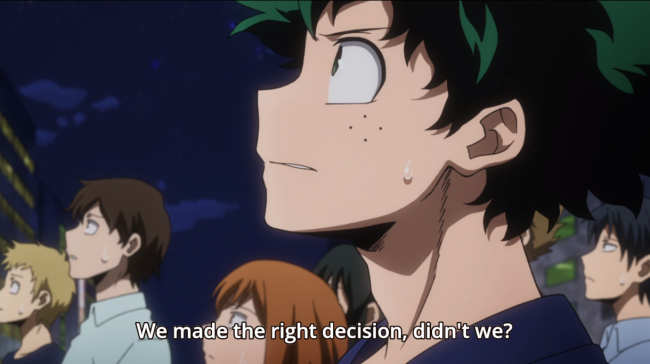 It’s a good thing I like this show, because looking at this from an objective state, the fight was barely a fight and more just a dialogue duel. A random twist thrown in there concerning All Might’s former master’s current family ties for full effect. All Might gets talked down to for about ten minutes before it shows off the coolest-looking (albeit supremely overdone) I-can-harness-just-enough-energy-to-defeat-you punch from the series’ entirety. It even pulled another slight deus ex machina with Endeavor and co. showing up before All Might can be essentially squashed. With this show, it seems to all be about the emotions, the gravity of a situation, and the grandeur of expectations.

It really is amazing how so flimsy a foundation can still make a series entertaining so long as one is into it. What happens in this episode can be described in one sentence: “All Might comes close to losing to the big baddie, but wins in the end by the might of his willpower.” That’s 90% of this episode, and still I liked it! That said, this is, I suppose “technically,” a somewhat weaker episode by measure of content, but the weight of the situation doesn’t make it feel so weak—almost as though the episode is paralleled with All Might’s flaccid state. It’s the measure of being big in the biggest moments that save it from being outright bad and/or “typical Shounen.” I suppose that’s all I can ask for. 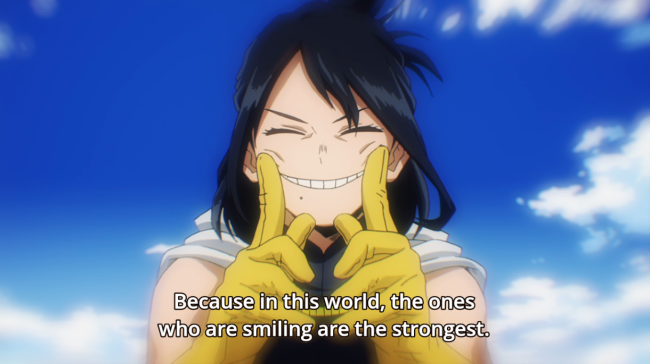 Next week’s episode promises to be a little more relaxed in its tone now that the biggest battle has been resolved. All but Midoriya have reason to take a deep breath, but I’m absolutely looking forward to how the series means to replace All Might as the beacon of hope. And with Midoriya—how the hell are people gonna get behind a scrawny kid like him?

Kapodaco said it well. Looking at this episode objectively it is the incredibly generic fight between good guy and bad guy where the bad guy has every advantage and then the good guy realises he can’t lose because of reasons and suddenly gets a power up. It shouldn’t work. It shouldn’t be moving.

I took a good twenty minutes after watching the episode to stop wanting to cry. Midoriya’s realisation, the gravity of the situation to come, seeing the fickle public who have been down on heroes for episodes suddenly rallying behind their symbol… Everything about this episode just hit me hard emotionally and the reason for that is that the groundwork for this episode has been being tirelessly laid since episode one of the first season. 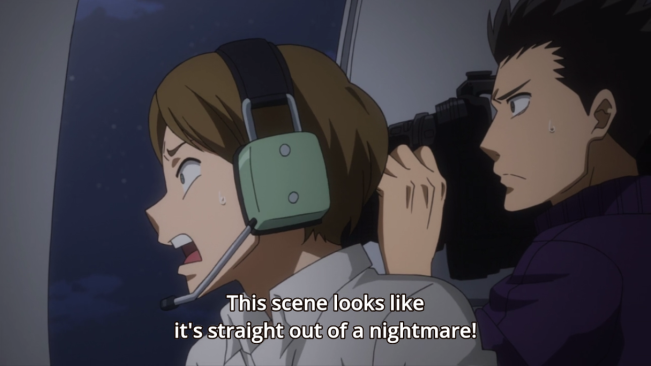 Where My Hero Academia manages to feel different for me, from other shounen fair, is the random power ups never feel like cheats. The conflicts never feel like they’ve come out of left field. And everything ties back in with the show’s central themes giving it a cohesion that carries you through even the more awkward moments.

While this fight might be an overblown visual mess with a lot of talking and very little to recommend the action other than lots of wind gusts to accompany the fight, it doesn’t matter. The audience are swept up in this moment because of everything it has been connected to and everything that it will lead to. While it might be a common story, it is a common story being told incredibly well and because the foundation of this narrative is solid, it has the room to play an episode like this without the audience rolling their eyes at the standard shounen antics on display. Because we know next week there will be a real fallout and a consequence. The characters won’t dust themselves off and be business as usual.

And okay, I probably did cry a little bit. A lot. Okay, maybe I still want to cry.

But when an episode hits me like this it certainly leaves a lasting impression.