Anime/manga consumers, from my own perspective (if anyone has handy statistics to prove me wrong, please provide them), are generally young (below 30), politically liberal, and emotionally pungent. That in mind, when I came across this manga, which promises to be politically engaging via the voice of a young boy who’s confused about his sexuality, and saw that it was ranked within the top 100 in average score on MyAnimeList, my initial thought was, rather bluntly, “Of course it is.” This is less of an insult to the potential quality of the manga and more of an acquired distrust for the collective bias of the generalization of anime/manga consumers noted above. I feel it’s important to note that just because you agree with something doesn’t mean it’s automatically good. But that’s a pretty heavy topic for another day.

Before talking about the manga itself, I’d like to add some interesting background info to the manga’s founding. The author, Yuhki Kamatani, came out in 2012 (all info comes from Wikipedia) as an “x-gender asexual.” Basically, from what I could gather, this is the Japanese equivalent to a gender-fluid individual with no interest in sex/sexual attraction. This makes the work even more noteworthy as a potential passion project, seeing as the author is so involved within the types of political and societal pressures of adhering to such different labels and representations. From my own experience, this is usually a good sign, as more effort is put forth into creating an environment that necessitates reality and/or feels more empathetic. It worked well enough with Kakukaku Shikajika.

Was I wrong to be wary of the inflated ratings attributed to Shimanami Tasogare? Mostly.

It’s a good work, putting it as straightforwardly as possible. Not perfect, and not to the degree of praise that it receives, though it’s understandable with how emotionally cognitive the work is in that it doesn’t really try to make the story very complex or imaginative. I have both praise and criticisms of this approach, as it implies both a desire to keep the feelings of angst fresh and simple, but also negates the long-term impact of character development and immersion. Even more, there’s the question as to what the author’s intent with the story is, whether to humanize a constantly berated subsection of society for their choice to go against gender/societal norms or make a fulfilling story of a place for everyone to call home. Optimistically pessimistic, vice-versa; less, more? There are many layers at work here that oftentimes struggle within how short a timeframe the manga has (twenty-three chapters, thirty-page average). Its ambiguity ends up becoming a positive, further cementing the sort of confused place of LGBT members within a world that’s not entirely accepting of them.

In an ironic twist to sound somewhat hypocritical, I stated above that just because someone agrees with something doesn’t automatically make it good. Just because Shimanami Tasogare declares those outside the lines of gender normality are human and deserving of acceptance doesn’t mean it’s any better of a work than, say, a conservative story that declares those people should conform to a gendered normal (This counterpoint took some revising to not sound inherently antagonistic). Even so, what I do declare to be a step in the right direction, as a lover of experimentation, is the desire to be different. Nothing is more boring to me when indulging in these stories (such as the one I did prior to this one) than something that is so apt to adhering to formulas and set pieces that every narrative, character type, or otherwise feels like every other story I’ve read before (Hi, Disney). How many manga so openly discusses homosexuality, transgenders, and asexuality and its impact on society? Hourou Musuko, to some extent, but otherwise I’m drawing a blank. Points in Shimanami‘s favor. 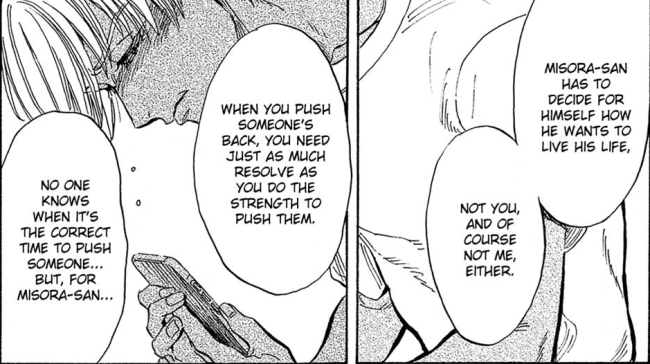 One of the biggest issues with this work, I find, is that there are times when even it isn’t sure of what to do with itself. There are a large number of characters here, each with painful backstories and issues to deal with in regards to their sexual orientations or gender. Some chapters focus individually on developing the characters that the male lead meets in a home full of outcasts, others try to make out an overarching theme of familial togetherness of said outcasts including the male lead. Some chapters seem pretty focused on creating tension between those within the “abject” and those who dub them so. It’s trying to create a buffet of different feelings and anxieties within such a short timeframe that I think end up backfiring because they end up as short-term goals.

With any story about homosexuality, there’s the inevitable outing scene, when a character tries to go against the flow of mounting evidence, only to seem more suspicious. There’s the aftermath, usually resulting in some bullying or unjust provocations from those who prey on the “weird” to feel mightier. If the story focused solely on this kid, who’s trying to deal with the pressures of staying true to himself in the face of societal disapproval, I think it would’ve been more impactful from one kind of perspective. Instead, the story takes many turns that go from anxious to magical to gloomy to hopeful. In short, it has its cake and eats it, too. So many different angles to frame the scope of the story and it ends up deciding to focus on too much in too little time.

If one were to ask me what part of the story I enjoyed the most, it’d likely fall to the individual characters. Writing in Shinanami is pretty well written, complementing the realism of the situations present while also being transparent with how confusing this entire ordeal is. If it sounds at all like I know much about gender types and sexualities and whatever else, it’s a facade. I only know what I can assume on a rational basis, as a heterosexual male who’s perfectly comfortable with said labels. A lot of the conflicts within the tale are a little beyond my understanding, though it’s easy to get lost in a subject that has only recently begun getting dissected in public spheres (per my knowledge). Characters who struggle with what they’re facing, or have lingering doubts or regrets behind their decision to walk the path of an outcast, have the gusto to sound as relatable as those who face problems of similar merits, only with a spice of oppression.

To end a (mostly) serious piece with a snarky snap, I’d definitely recommend this work to people who aren’t narrow-minded about the world in general. In the end, people want to be accepted for who they are. It’s the basis of every sociology/psychology class I’ve ever taken, yet for some reason it always seems to be so easy for everyone to forget. I believe I’ve mentioned on a few occasions how more liberal I am than otherwise, so even though I agree strongly with what’s being preached in Shimanami Tasogare, what I find recommendable with it is not for the message, but how the message is presented. Not forcefully, not gently. It’s somewhere off the lines.