We’re taking a break next week, evidenced by Karandi’s break announcement and this tweet. What are we left with in its wake? A break episode! Come one, come all as Karandi and I fight about the episode’s quality! Bet you won’t expect which one of us is on the negative side!

I’m kind of stumped this week because it really pains me to use words such as trite or vapid to describe an episode of My Hero Academia, but those are the adjectives that immediately come to mind. Drawn out, excruciatingly dull, and pointless also began to appear in my mind when I thought of how to describe this latest offering.

I get that we need some down time after an abduction, a rescue, and a world changing moments where the symbol of peace has essentially been silenced. I do understand that from a pacing point of view a fluff piece is kind of needed. But even by that standard, this episode is dull. 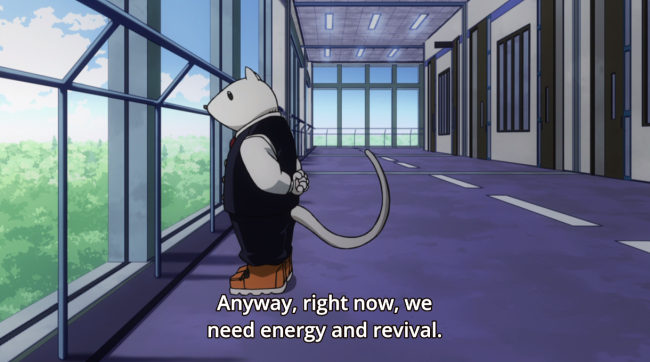 Essentially the only point of ‘interest’, I use that term loosely, is that the other kids realise there’s some tension in the group after the five who broke rules nearly got them all expelled and so they decide to clear the air by inspecting everyone’s room and voting who has the best. Because nothing brings a group closer together like crossing forcibly over personal boundaries and popularity polls.

By the time we get to what I guess was supposed to be the touching reconciliation moment at the end with Tsuyu, I was really struggling to care and part of me was hoping for a villain to show up and blow the dorm apart just so that I could say something had happened this episode.

Part of me understands that in a marathon viewing this episode would probably be a nice breather, but as a seasonal watch, this was essentially a dead week.

Yeesh. Here Karandi is starting fires and I’m the one who has to bring the extinguisher.

I’ll serve as the opposite this week by stating that I really enjoyed this episode, because for me, the “point” of this episode was character. All the expectations I had for the students living together in a dorm were mostly satisfied by this episode, as it brought a nice lively attitude to a series that has been drowning in gloomy seriousness for a good ten or so episodes. Not only that, but we got to see a little more complexity from the characters at hand.

Even better, this episode was funnier than when the series tried to be funny in the first three episodes. I love the set-up of “Todoroki, how did you completely remodel a room in a single day?!” “…I worked hard.” I love when they visit Iida’s room and he has a giant assortment of glasses sitting upon wall-mounted counters, and in the very next scene one can see Ashido and Ochaco wearing those glasses as they inspect someone else’s room. These little bits of subtle humor work wonders for me and are a really nice contrast to what the series has been up to this point. If the series decides to continue this route a little longer, should they continue it like this, I have no complaints.

Furthermore, the final confession by Asui was completely unexpected. Here I thought the lingering effects of the Bakugo rescue plan would be forgiven and forgotten, yet Asui was feeling bad about the things she said. I never even considered it (nor remembered until she brought it back up), yet she shows an unexpectedly gentle side by making such an emotional apology. I think this is the first time Asui has cried in this series. When I think of her, I think calm and collected, so this was a nice emphasis of her age and inexperience.

Though I can see where the criticisms stem from. Much like All Might’s final fight, there isn’t really that much going on in this episode practically. They spend half the episode looking at each other’s rooms. My Hero Academia! There’s some reaction from teachers on the students’ actions and a three-minute apology scene from Asui. Those looking for action-packed heroics will definitely be disappointed.

But those who come for character may be very delighted, as I was.