Back at the time, I opened my “review” of Umi Monogatari by highlighting how underrated it is, listing notable anime titles with higher average ratings I found it superior to. While this receives nowhere near the kind of shit ratings Ume Monogatari gets, it’s still confusingly low in my mind. Its average rating on MAL is a measly 7.4, putting it within the 2000’s in terms of overall average in the database.

Allow me to take a page out of my own playbook and comprise a (shorter, I promise) list of anime with higher average ratings that I think this is superior to:

So part of this wrap-up will include the reasons I theorize concluded to the anime getting such blah reviews and ratings, whether or not they have any basis. But I’d like to think I’m smart enough to come up with legitimate arguments.

One idea is a genuine negative criticism I have the show: it’s kind of boring. It’s possible audiences found this anime more boring than I did, especially the earlier episodes, which were spectacularly boring. Something about them just didn’t hit the mark, whether because the jokes fell flat or the interactions between characters felt forced. The premise of a girl being in love with a 2D-loving waifu collector seems really off-base, and even when she explained her mindset in episode two, I still wasn’t convinced. Not until the series got to about the halfway point could I sense reason for her attraction towards him, instead of the show simply telling me that she is and taking it at face value.

The previous point serves as an unintentional segue into my next theory: this show is slow. Slow in just about every aspect, I didn’t even feel any emotional attachment to the show until, once again, about the halfway point. It’s slow to introduce the full cast, and their purpose for existing in this universe; it’s slow with its development of the female and male leads’ relationship (which, spoiler, goes almost nowhere by the end), and it’s slow to really find a groove for itself as a series and what it wants to do with itself. I almost see the first three episodes or so as a trial run, where Konobi tries to figure out how it wants to do things and who it wants among the cast of characters, almost like the first four episodes of Lucky Star. For this reason, I can see people fleeing the series fairly early.

As the ultimate rotten cherry on top, this show switches around and introduces characters for absolutely no reason. For example, there’s this female character who’s introduced halfway through the series (lots of fun stuff at the halfway point) who initially seems like a rival to the female lead for the male lead’s affection. Then this is dropped in subsequent episodes to turn her into a generic chuunibyou character, only to have her become more of a side-friend character that the two leads can rely on for various reasons. So… what’s her point then? She’s simply introduced to further bloat the character roster. This is also the case for the club advisor, who is initially a normal, older-male teacher with a relaxed personality. Some episodes in, he decides to advise another club and gives the job to a kawaii, young female teacher with a klutzy personality. That isn’t blatant at all. There are quite a few instances of this that provide unnecessary or otherwise unimportant screentime that could’ve been served more efficiently. Just go with the kawaii advisor from the start, or introduce the female character as a rival and have her stick to being a rival.

Such harsh negative criticisms of the piece and yet I came out of this experience with a positive mindset. Even with all this in mind, when the show hit its mark, it hit it in the triple-20 range (that’s the only part of a dartboard more valuable than a bullseye). What is shown of the male and female leads’ progressing relationship is really sweet. It’s good enough that I like both of these characters on their own, but I actually would like them together. They have good chemistry when the male isn’t being intentionally oblivious because plot. They have good and bad points, both of them, which makes them feel more realistic and their motivations more heartfelt. There’s even one sequence between a recurring child character and the art club president (whose main shtick is sleeping all the time) where said president simply interacts with the kid and shows her around the school and such. On the surface it’s inconsequential, but there’s a purity about it that makes it hard not to find endearing. I just wish this show did that more often.

Oh, I thought of another possible reason this show’s ratings are so mixed: the lack of any focus on art. Konobi‘s premise of being in an art club has some merit on the show’s plot occasionally, but when it comes to actually learning the finer details of art history or techniques or what-not, Shirobako this is not. It’s more of a placeholder for these characters to mess around in and have something to do from day to day. Though for me personally, I don’t mind this too much as I’d gladly have a show more centered on humor or romance or what-have-you in sacrificing any sort of central “point” a synopsis provides. I just want it done well, and with any sort of motivation other than “profit” or “easier.” Konobi tends to have more of these genuine moments with actual depth to them than many of its club-based genre, but it’s rather inconsistent combined with all the other issues it has. 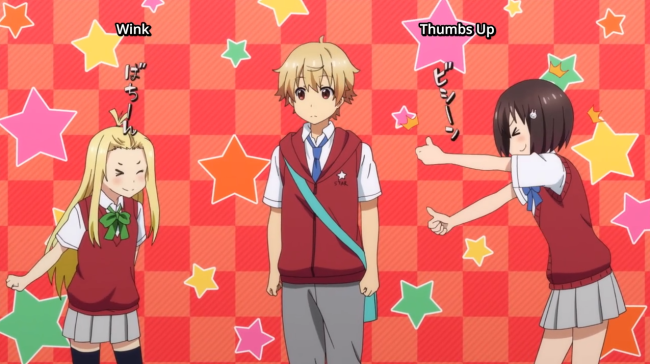 Appropriately-suited for an anime about art, this title has a decent color palate. I think the designs for the characters are a nice mix of normal and odd to both immerse the viewer and entertain them. Characters have differing characteristics to them that highlight their personalities in a way that isn’t super-flashy, but they’re definitely noticeable. The female lead is the most normal of the bunch and looks the most normal; the male lead is an otaku, with blond hair, red-ish eyes, and an orange hoodie with “STAR” across it. Even if his personality isn’t super refined, his design definitely gives the audience the impression that he’s a little off (with societal standards). I also enjoy how the animation tries to animate characters in real-time motion (albeit in very limited sequences). A few sequences I can immediately recall had some gusto to their level of movement detail, mirroring how one would move within those scenarios. They aren’t perfect, as some feel more static-y as a result, but I’m glad they even tried.

It’s something of a surprise hit with me, even if my following score doesn’t give the impression that it’s a must-watch. No matter how much I found myself enjoying it by the end, there are quite a few problems here that I can’t overlook, as well as the boredom I faced watching a few of these episodes. Still, it’s something that gets better with age, or time, as the ending episodes impacted me more than the earlier ones, notably due to the emphasis on character interaction and the theme of “Y-O-U-T-H!!” Now I’m interested in following the manga.