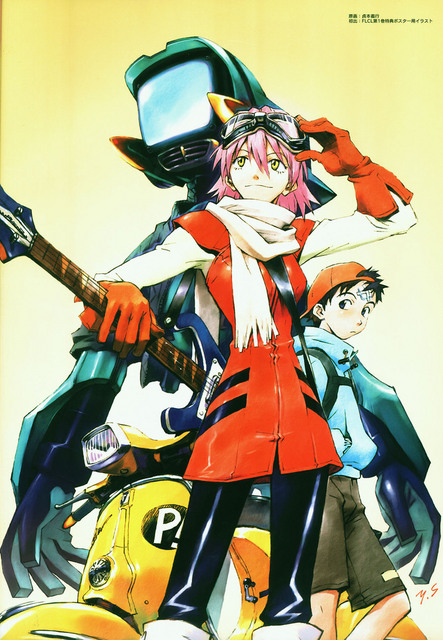 This was a long time coming.

Fun fact: This is my second time watching this series. The first time was somewhere between 2003 and 2004, whenever it decided to air on Adult Swim at midnight or later. FLCL is one of those anime titles that I remembered snippets of from my youth, but never quite got me into the medium of anime itself. Various quotes and events that I viewed just within the last twenty-four hours I can actually remember from back then; “Mouth to mouth,” the implied sexual encounter between Haruko and Naota’s father, and Naota being eaten up by the robot and turning red and God-like. It’s funny to consider that when I think of the anime of my youth, my typical listing includes Dragon Ball Z, Tenchi Muyo, or Pokémon/Digimon, but FLCL actually left quite the impression on me, as well.

One thing I never really got as a kid—at least directly—was the extreme amount of sexual tension in this piece. I was pondering it as the last episode played out, what I had grasped of the sexual innuendos when I was ten or so. Bringing back the scene between Haruko and Naota’s father, I remember witnessing that scene almost as if I were in Naota’s shoes; it was a complete shock and something I couldn’t fathom due to my own inexperience. At ten-years-old, I had not a clue what the situation between the adult characters was implying, all I comprehended was that it was bad and… strangely fascinating. To think that that was one of the most memorable moments of the anime for me, seeing as I watched a good portion of the entire series, kind of makes me laugh as an adult. Perhaps my fancy for perversion started earlier than when it eventually exploded.

Though the reason I’m stating all this is not for the sake of sharing more personal history than need be. It allows me to think back to when I was around Naota’s age (he’s twelve, I was ten) and look at these situations occurring with absolutely no experience with anime—or whatever the hell FLCL is trying to be—and with very little knowledge of what it’s like to be an adult; to see the world bigger than what’s within my mental grasp or see from the view of others. It’s a really neat experience to feel like you’re watching something you’ve already seen for the first time as a completely different person. Yet the person you were once before still lingers and provides added clarity to the nostalgia or what a topic meant to you as you were then. To put it less pretentiously, it’s like having two people in one body watch a series at the same time in a different time. Does that make sense?

I’ll refrain from the personal history lesson for now. What I think is also interesting are the expectations surrounding FLCL, as evidenced by the top reviews on MAL. Most helpful review is a 10/10. Second-most is a 2/10. Yeesh. One could infer that this is a “Love it or hate it” series, and I think after watching it as a tired weeb veteran, I can say it’s more likely than not. Still, reading into some of the complaints about the negative reviews, much of it relies on the expectation that this is a masterpiece of animation, a 250-IQ work of genius, or a thrill ride that never stops. The opening of one review even complained that it wasn’t funny, claiming that the primary genre is comedy. If I may be petty for one line, that’s fucking stupid. FLCL‘s genre specification means so little to its product that I don’t think any genre actually completely fits it. It’s more of a spirited coming-of-age story. (Sorry, that was more than one line.)

Still, it’s understandable to walk into this expecting something. The reputation is hard to miss, what with its high ratings on most anime databases and the popularity surrounding the anime due to its U.S. release. After all, I was a victim of its U.S. advertising; I watched the series as a curious kid on Adult Swim. Perhaps the adoration really is just nostalgia, perhaps it’s just the big, bad elitists trying to tell the world what’s good or bad because it’s deep or symbolic. Really, I think people should take FLCL at face-value, and by that, I mean ignore the noise. Indulge in the “masterpiece or masterpiece of shit” debates if one wants for the sake of research, but when the first episode starts up, you watch it with a clean slate. Experience the anime as it’s told to you, don’t rely on the words or expectations of others… including mine. Fuck me and fuck everyone.

Alright, but really. Nostalgia aside, I enjoyed my experience with FLCL. I liked what it was trying to present, whatever it may be (I have my theories, others have theirs). What frequent readers of my blog may already be aware, I tend to enjoy stories that try to be symbolic, or chaotic, or bizarre. Really, I just like things that try. Try to be different, or better, or deeper, or impactful—definitely impactful. It doesn’t always work out that way, as I don’t tend to like it when it’s super-dark for no reason, but here, I think it does what it wants to do well and it shows through the characters’ behavior, which are relatable (as well as they can be) and enjoyable. I liked Naota, I liked Haruko, I liked the random female classmate who’s implied to have a thing for Naota. Mashimi is… something. I liked the dynamic of a kid wanting to be an adult, faced with the pressure of living up to someone else whom everyone compares him to. I liked the huge set-up just to maybe say “Enjoy your youth while you can,” or “Be your own person” or “The world is yours for the taking.”

There is a lot to like about FLCL that one can’t find with a lot of anime. First of all, the music’s great. Lots of rock music reminiscent of the time period. It’s appealing specifically to my interests. Lots of energy with the animation, as well as different styles of animation because why not? South Park was cool in the early 2000’s, right? A really abstract story that I think is fun to follow; I don’t think it’s all that important that it doesn’t make 100% realistic sense. Characters are always lively and bursting to the brim with enthusiasm. They bounce off each other well and offer some different angles to the major characters.

Buuuuuuut, that may also be its downfall. It’s definitely pandering to a specific niche: one that enjoys chaos and energy and hoo-rah emotions. It’s like the more insane moments of Kill la Kill except spread out and compressed into six episodes. Serious moments definitely exist within the universe, but there are times when the energy comes out of nowhere and feels a little… too much. I can understand if people find this series too much, described that exact way. Too abstract, too energetic, too coo-coo, too stupid. I found it too much in some spurts, and it even alienated some of the serious moments by making them feel dull in comparison. Not to mention, the first three episodes have a certain formula that it tends to follow that’s pretty blatant. Only after this does some grand opera of a conflict seems to rear itself, but that felt a little out of nowhere, too. It’s almost like writing things as it goes along. Good that it’s only six episodes, but it occasionally shows stretch marks.

It’s fairly late and I’m getting tired. The Summer of Manga/Anime has reached its end and I’m pretty relieved to be able to focus on other things I’ve wanted to write about for months now. FLCL ended up being a fantastic closer as it allowed me to feel a strange rekindling of my youth in the form of watching something again after fifteen-ish years. As for the series itself, it’s good, I can say that firmly. It’s deserving of the cult following its garnered, though it’s not something I’d consider a masterpiece. It’s a series that thrived on being different, and telling a story in a way that requires some thinkin’ power. I love me some thinkin’. If you love you some thinkin’, then I think you think ’bout givin’ this ‘ere series a go.