To those looking at the title of this post and thinking “Did Kapodaco ever promise that he was going to review this? I don’t even know what this is,” it’s understandable that you would think this. After all, I mentioned to almost nobody that I was playing this game, much less reviewing it. Almost nobody. Back in late March, I told my co-workers at KeenGamer that I would review this game at some point when I was done with it. When I finally did finish it up, I didn’t write the review. Why? I don’t know. I just didn’t. Can’t really give a valid reason now because it was nearly half a year ago. I don’t remember why. Nevertheless, I don’t want this game to fall within the cracks; I’ve played plenty of games for KeenGamer ranging from good to bad, and this game is definitely deserving of at least some attention.

The ending of the previous paragraph is all the more notable when you go to the game’s Steam page and see that it has zero user reviews, nor any indication that anyone has even bothered with it. Similarly, its vndb page has only a single user rating. Whose rating do you think that is? Here’s a hint: His name rhymes with “Manokato.” It seems bizarre to me that a game of this caliber (in terms of production value) has gone so overlooked. That’s why I decided that I would eventually review it on my blog instead of KeenGamer, as, almost sadly, I usually get more traffic on my blog than my reviewing job (dependent on the game I review).

Ignis Avis Venatio is a visual novel about a boy named Cain who stumbles upon a world of fantasy and magic and what-not. Upon triggering events beyond his control, he finds himself trapped in a game of destiny and tragedy as members of a sort of “game” have to hunt each other down in order to collect a power so great it puts gods to shame. Won’t lie, the plot to this is pretty formulaic, and feels very, very inspired by the Fate/ series. It almost hits the exact notes that Fate/Zero, specifically, incorporated in its anime adaptation back in 2011. Does that make it bad? No. Does that make it unoriginal? Definitely.

Before I move on, I just remembered something about my experience with Steam playing this game. For whatever reason, some sessions playing this game didn’t accumulate into my total playing time, so while it says I played the game for eight hours, I think it was a few hours more than that. The game promises about ten hours of content, though it took me a little longer in order to navigate all the choices and pathways presented that alter endings and such. Something else I thought I remembered about the game is that it was priced at $25, but checking it now it may have been reduced to $20. This is a good thing, as even I, after seeing its price tag before buying it, immediately hesitated. To compare, Narcissu on Steam took me about five hours to completely read through—and while pretty light on pictures and activity, still featured a professional-looking (at the time) aura to it. That game is free. 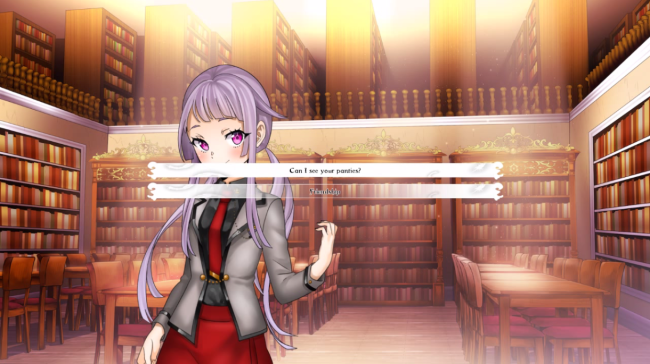 Back to the game itself, despite its unoriginality, there’s something motivating about the story it presents. It feels detailed, well thought out, and interesting to follow along with… eventually. The beginning chapters of this game aren’t quite up to par with the rest of it, as a lot of the introductory elements feel a little too basic. I, about an hour in, almost regretted purchasing this due to how unimpressed I was with its manner of storytelling. Cain, who is described as a cynical teen, was kind of mean and that’s pretty much it. It felt like a front, a lot of this felt like a front. And part of that was due to the fact that so much shit was happening with very little explanation, almost like the writer couldn’t wait to get to “The good part.” That explanation would come much later.

What makes this game all worth it, twenty dollars and all, are the characters. Not all of them, mind you, as a few are pretty one-note, and the all-too-familiar “insane just to be insane” trope is thrown in like crazy (with the cherry on top being a flashback featuring the insane characters experiencing traumatic incidents from their childhood before their deaths). But those who end up surviving for long periods of time are genuinely enjoyable and easy to care for. The interactions between Cain and those he eventually comes to ally himself with (which can change dependent on what the player chooses) are fun and only slightly cliché, with development coming in pretty even spurts. Likely the most beneficial part of the game is the fact that the writer felt the need to develop these characters, therefore having the player care about whether they die or not (kind of like Fate/Zero). It works pretty well here, though again, only with a select few.

Turning towards the production values, Ignis Avis Venatio feels both professional and amateurish; it all depends on what’s being highlighted. With its art, it’s both. Indeed, some art from this game looks fantastic, almost as though it were drawn by professionals. Other art, unfortunately, looks really wonky, like it doesn’t even belong in the same game. Most notable of this is a single character’s idle image which I swear looks bird-like and, just, uncanny. Generally pretty good, but occasionally pretty bad. With sound, this game has a lot of basic—and what I assume to be freeware—sounds accompanying the story. Let it be known that there’s no (detailed) animation in this game, nor is there voice acting or dynamic cutscenes. What it does have are detailed accounts of fight scenes accompanied by sounds that would fit into that scenario. This helps a lot with the immersive quality of the battles, though its minimal use and limited supply of sounds may make it feel a little awkward in parts, especially during fast-paced fights with quick actions.

Its soundtrack is decent for accompanying the mood for the game, but in all honesty, I remember basically zero tracks from this game. I remember liking them within the context of a certain scene or event, but I wasn’t bobbing my head or anything. I’d much rather have the music than not, though sometimes I got so immersed I forgot it was even there.

Finally, I’ll discuss a bit about the writing of this game. It’s a mix. A big mix of different tones and genres and events. It can be silly, it can be hardcore anime, it can be meta, and it can be tragic. There’s a little bit of everything here, which is normally a recipe for disaster but I think works well enough with where and how they present these tones. One of the more antagonistic characters has a running gag that she’s a really old and powerful magic user, but looks like she’s twelve. This isn’t done at every turn, only more during downtime scenes between her and Cain or others in tense, but not serious situations. In the same vein, Cain’s childhood friend, who is a trap (this game is very liberal with pairings, by the way), is constantly shown in feminine lights and as a generic jealous female childhood friend archetype. Again, this is only in the most lax tones of the game where everything seems safe. Otherwise, he’s a caring and supportive friend. Nothing too complicated, and yet many visual novels—and especially anime and manga—can’t seem to get this right. Ignis Avis Venatio gets this right… normally.

For what it’s worth, it’s a perfectly decent story, even for those who weren’t too fond of Fate/Zero or its tragic overtones. Many characters are developed, or at least likable, with a setting that gives them opportunity to expand their range of emotions. Writing that feels spirited and detailed, its only major flaws come in the form of perhaps being too influenced by stories that have done it better. That, and there are a lot of petty stereotypical things present that ruin whatever potential this could have had. A good story that could’ve been better had it reigned in some restraint, so to say. Even as it is now, it’s something I’d definitely recommend… though maybe not for twenty dollars.

2 thoughts on “A Long Overdue Review of Ignis Avis Venatio”