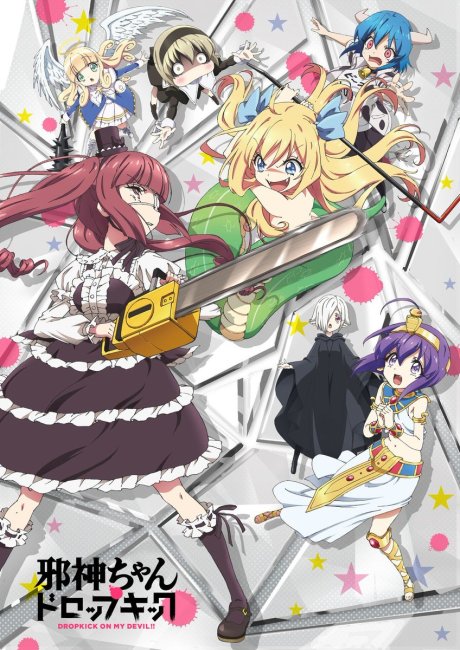 Three episodes in, I could get through this without wanting to dropkick my face in.

Before I dive in, I’d like to take a moment to say that I have turned twenty-five today! I was pondering doing something to celebrate in the form of another all-out blog post, but I honestly can’t think of anything to do, so I figured I’d just carry on and do things as usual. If anything does end up happening, it’ll be spontaneous, and this little excerpt will look pretty silly after the possible fact.

Now then, Jashin-chan Dropkick was something I actually intended to watch when the Summer season began, but my Summer of Anime block had me pretty burned out and didn’t care to watch anything seasonally, so I let it wait. Some time later, I still didn’t have the energy to pick anything out, so I almost just went without watching anything this season. As fate would have it, evidenced by me even typing this out, I decided to watch two shows: one I wrote on yesterday and the one I’m writing on now. Jashin-chan Dropkick looked just stupid enough for me to find some enjoyment in. And it is.

What I’m a little surprised about is just how low this anime is rated on MAL. It’s an episodic series with basic characters, but is that really enough to justify an average rating in the 6000’s?! That’s, like, bottom of the barrel, outright offensive anime territory. This is anything but… probably.

I’ve heard this compared to Bludgeoning Angel Dokuro-chan, which for those unaware is a super-dumb series featuring gratuitously violent slapstick comedy and random insanity with each episode. Dokuro-chan is even rated higher than Jashin-chan on MAL! I think the comparisons are fair, though only on the aspects of violent slapstick and angels and devils, as the rest of the series’ structure is fairly different. Dokuro-chan is more of a parody with uninhibited, edgy humor whereas Jashin-chan is more… “normal.” It’s still a little satirical with its characters designs and intentions (many devils are shown as good spirits while the fallen angel is shown as an untrusting weakling), just that I think the manner of presentation is more of an all-inclusive vibe. Anyone can watch this and get it. 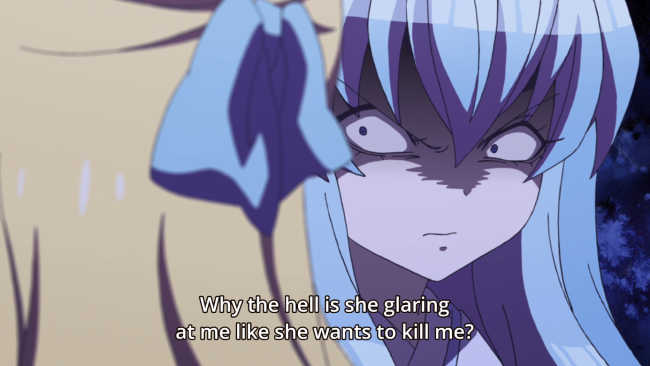 That said, it’s fairly basic with its characters and story and doesn’t really try to do anything more than it feel it needs to. Very occasionally characters will inch towards some level of development, but Jashin-chan is more concerned with the character complexity of Tom & Jerry than anything else. The sort of formula it partakes in even rings similarly to Tom & Jerry, where the pursuer (Tom/Jashin) is constantly trying to capture/kill/eat (are Tom’s intentions ever consistent?) their sworn nemesis (Jerry/Yurine). Every episode (thus far) has been pretty straightforward with adhering to this structure and little else, which can make this feel repetitive to many, I’m sure.

Still, I find it a fairly amusing, if not tolerable watch. The characters are fun in various situations and while I’m not getting any particular brain food with this type of series, I think there’s enough for ironic situations/motivations to give this enough of an intriguing, if not occasionally entertaining hook. It’s also colorful enough and expressive in its animation palette (toned down from Asobi Asobase) to be something worth watching to kill time. I’m not sure if that’s a recommendation, but it’s as good a recommendation as I can give this series after three episodes. It could get better, though realistically, it’ll remain perfectly watchable.