If you’re among the unaware, this game was the topic of my latest Traveling Thoughts series, where I take a topic and dissect it into parts and analyze it from the bottom-up; after I’ve had enough, I write a full review for the topic as a whole, hence the reason this post exists. Should you want more detail than what I’ll provide further on, please feel free to explore the provided Link (haha).

Nearly a year and a half after this game hit the market and blazed the course of Nintendo’s future with the Nintendo Switch, I’m finally reviewing the game that usually makes up the 1-2 punch with Super Mario Odyssey as the best games of 2017. Though better late than never, I feel there likely won’t be as much enthusiasm or vigor with this review as if I were writing this a week after finishing it for the first time. As of writing this, I’ve played through about 70% of the game twice and have beaten it once… late last year. While the dust has settled, trying to reinvest in such an exhaustive (both good and bad term) adventure may prove difficult, but I’ll do my best to clearly elaborate on how I feel about the game and what it’s worth.

What is likely the biggest factor about this game that is new to no one at this point is the game’s scope. This is, likely by far, the biggest Hyrule has ever been in a Zelda game. Exploring every part of the world and investing the time to turn every rock, to kill every (re-spawning) enemy, to engage in every shrine, will guarantee many, many hours of playtime. There’s an uncommon, but prominent criticism in games where games often try to make everything bigger, but that doesn’t always correlate to better, as should the world be empty, the size only serves as dead space to get from place to place. I think Breath of the Wild is guilty of this to some degree; not for being empty, but for not providing enough. Collecting Korok Seeds, collectible turds (as it’s implied) from Koroks hiding all over Hyrule, is only enticing for so long. Shrines also start to lose their luster when one is near the endpoint of the game. If not for these two traveling points, there’s very little to do in the land of Hyrule if there’s no civilization to be found. One will spend many hours simply running, gliding, and climbing around gargantuan fields and mountains with little payoff, which adds to the exhaustion of playing long-term.

What was also a common striking point for my negative criticism is the game’s incredibly straightforward and non-expansive story. Once again, Link is tasked with saving Hyrule from Ganon and that’s pretty much it. Traveling to major points in the land will lead to repetitive situations where Link will essentially relive the same events from past points with different characters. Seeing different species and having them interact with Link is interesting and enjoyable, but when it comes to the most grim expectations concerned, the game rarely accomplishes true immersive quality, somewhat aided by the borderline-cringey voice acting.

And should these two points really serve as the reason you won’t care for this title, it’s entirely understandable. There’s no reason to waste the time waiting for the game to click. These two points are, however, the only two major negative criticisms I have of the game.

There is an undeniable magic to this game that’s hard to describe with words. It’s a gut feeling, a purely emotional connection that seems to resonate within the souls of those who understand. It’s a magic that tends to envelop Nintendo’s better works, which may be why I continue to be so confident in the company’s ability to entertain me, even through rough times (I didn’t care for the Wii U and most of its library). Breath of the Wild is yet another purveyor of this strange, unfounded magic that seems to make the game bigger than it really is… maybe. Despite the criticisms, whether major to one or otherwise, there’s a beautiful blend of old and new with this game that sings back to the franchise’s roots whilst simultaneously creating a brand new experience… for that franchise. Sort of in a sense that the franchise is adhering to a standard formula relative to the universe of modern gaming, but putting in every follicle of effort and care to showcase exactly what they know about making a game fun. And it is—though not always—tremendously fun. 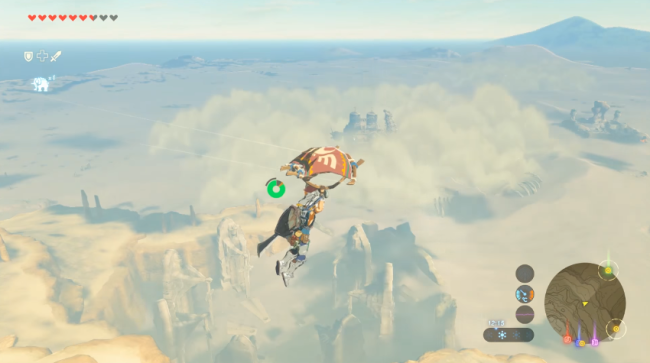 I said this with Skyward Sword before, but this time I think I really mean it when I say that Breath of the Wild is the best-looking game in the franchise. Better graphics and utilities due to current times aside, there’s an emphasis on making the game look like a dream, like an uncannily familiar representation of what everyone knows Hyrule to look like, but oddly different. Some style of incorporating flashback sequences, bright lights and random blackout sequences in-game, as well as same-yet-different looks of characters of old in the new. Link and Zelda look similar, but not entirely the same as past iterations, in part from drastic changes in attire and, for Zelda specifically, personality. Other major characters have their eerie resemblances, too, just in the sense that they’re from memory instead of reality. It’s appropriate that Link has amnesia in this game, as the (probably only from my perception) visual style of the game feels like it’s a constant wracking of the brain to remember every vivid detail.

Shrines and the Divine Beasts, mini-tests and major-tests that serve as the game’s traditional dungeons of games past, are typically fun and occasionally very annoying, much like dungeons from past games. Their reward for full completion is well enough that one looks forward to the next one… the next of 100+, but I digress. My inner completionist oftentimes strayed from the major plot point to explore the world around me, usually coming across about five or six shrines before I actually take the time to focus on what’s recommended of me from the game. While it may get old eventually, it definitely takes a long while for it to get to that point, especially for those who adore open-world adventures such as the Elder Scrolls games. Link is (should you allow him) well-equipped to take on all challenges and the game doesn’t hold your hand too often outside the opening area, leaving for some fancy experimentation that can add to problem-solving involving enemies or mini-bosses. 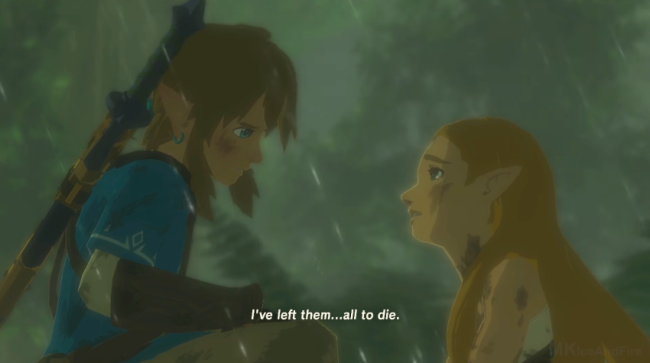 The amount available to the player eclipses every Zelda title to this point, especially in terms of inventory. Material, food, bugs, weapons, shields, potions, monster bits, bows and arrows, and others are all easily accessible from the pause menu to mess with at one’s disposal. The more one has, the more likely one’s got an upper hand in battle, on wallet size, on quest objectives, and all sorts of good shit. One can cook their own food, create their own potions, choose their own weapons, equip their own armor, customize their health or endurance, and all sorts of things. This level of freedom in a Zelda game is unheard of, and gives the game a liberating feeling of true independence the likes Nintendo has rarely given before. It adds numerous amounts of charm to the game and boosts replayability from the possibility of doing things in a completely different manner. And why not? The game lets you do so.

This is probably my favorite Zelda title. It’s hard to say when my experience with the series is only based on playing through a majority of a game and never finishing it (terrible, I know). Still, with this, I never felt a true urge to put the game down from exhaustion, or because it was too much and my effort ran out. It got close, to be fair, though finishing any Zelda game, in terms of personal history, seems to be a challenge for me, so this is definitely commendable. There’s simply too much good going for it along with the strange magic Nintendo games have for me to grow bored of it, especially the first (and most of the second) time. It’s definitely deserving of the hype it’s gained since it’s release, and I’m another dedicated follower. Not without its faults, Breath of the Wild survives by sheer spectacle and the oh-so juicy feeling of freedom, combined with giving the player plenty to work with in terms of interactivity and customization.

(All gameplay screenshots courtesy of MKIceAndFire.)

2 thoughts on “The Legend of Zelda: Breath of the Wild Review”