I may just turn this into a series of posts to come out periodically; a collection of things that I find within indulging in visual media that have become popular think pieces for me over the years. This post’s topic is something that plagues me—and likely many others—on a regular basis.

When picking up anime to watch, what is the first thing that comes to your mind that may influence your decision to say “Yay” or “Nay”? Aside from synopsis, of course, I’m referring more to the general feel of a series before diving in, that sort of vibe or gut feeling you get when you see a shiny-looking series and you mentally check all the boxes that leads you to a firm decision. For me, especially recently, it typically comes down to two things: Does it look dumb, yet fun? Or like it has the potential to be something good/great? Put more generally, is it wholesome or is it profound?

Quick thing, I’m not implying that wholesome works are all inherently dumb fun, but they have (from my experiences) a much higher chance of being dumb fun than anything on a more intellectually-stimulating conglomerate of elitist-pandering topics. 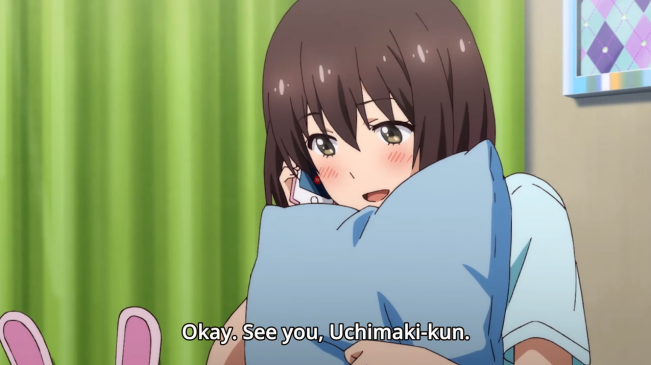 Let me now focus on the first image shown for this piece, the one you see above, featuring two series: Demi-chan wa Kataritai and Dennou Coil. One I love for being incredibly straightforward and silly with its execution of portraying the youth of a different “culture” in a realistic world, and the other I love for building upon a story that creates a multitude of different means of looking at the way people deal with tragic and/or strenuous situations. One is a lot more relaxed with its tone (for the most part) while the other is generally serious, albeit with a whimsical temperament. There’s a mood one needs to be in to enjoy either of these works at their highest points, which is where the predicament lies as someone who is constantly juggling his desire to be lazy with his desire to think and think and think some more.

The wholesome works are almost always easier to watch, as the wholesome works don’t require a lot of brainpower or, admittedly, attention to detail to succeed. Again, this isn’t to be confused with just random slice-of-life fan service nonsense, but works that actually work to achieve a sense of love and commitment between its characters or with the story. Aside from Demi-chan, take series such as Tsuki ga Kirei, Komi-san wa, Comyushou desu, or Toradora! as good examples for this type of “wholesomeness.” None of these series are particularly hard to follow from a narrative standpoint, the characters are generally either one-note or developed just enough as to not call out the authors for being lazy, and all take place in relatable settings (schools, mostly). Aside from Toradora!, which is my favorite series of all time due to nostalgia more than its actual qualifications, none of these series fetch scores higher than 8/10 from me. And yet, I love them likely as much as some of the more profound series that I’ve seen, which I will cover shortly. Along with this, I’m more likely to indulge in simple, fun series than the alternative.

With the profound, the turnout is typically much, much more rewarding than the wholesome side. As much as I enjoy some “D’awww” moments between cute characters, what really triggers my Longinus-prescribed helping of overwhelming Sublime is a well-thought out, insightful story that’s typically morally ambiguous and trying to establish a number of messages for the viewer to digest. Recent(ish) examples include Berserk, Shinsekai yori, and Hyouge Mono as series that tend to try and make something more out of their premise, genre, or story than what the average person would expect to get out of it. On the non-anime side (because this doesn’t just apply to anime), films such as Blade Runner 2049—which I adore more than I should admit—and Children of Men also provide some oh-so wonderful mental parades of things I can ponder about for days on end that make the films much more powerful, rather than taking them at face value. I’m not gonna get that from Komi-san.

Though as I hinted to somewhat earlier on, it’s much easier to just turn off the expectations and watch something that I’m almost certain won’t challenge me, at least mentally (can’t speak for emotionally). It’s the reason I continue to watch things of a non-serious nature, or other times complete garbage. Green Green? Yeah, it was bad, but it was a fairly easy watch. I just had to pay half-attention and I didn’t really miss anything. Green Green is as wholesome as drawing a dick on a picture of Spongebob, by the way. With wholesome series, I’ll likely enjoy the viewing, but it’s not something that I find challenging to watch, which isn’t the same for series that try to be profound. And I don’t always watch for the challenge. I try to watch what I think I’ll enjoy. However, my own laziness may very well be getting in the way of that when I see a two-cour series that promises to be a grand spectacle that I look at and can feel the pressure of my expectations weighing me down.

To break it down in short-form, I like wholesome series and profound series. I tend to like profound series more than wholesome series, but wholesome series are easier to watch as they offer little mental challenge and focus on the heart. It’s hard to find a balance between picking things that could either be wholesome or profound while also being good enough to make me feel anything. That last point wasn’t really discussed, but my reputation as a cynical hare could likely have people assume so. This is the predicament, and the point of this post.

As a little bonus, is there any series I consider to be both wholesome and profound? I think the closest (at least recently) would be Sora yori mo Tooi Basho, which I would highly recommend. It bends a little more towards wholesome than profound, but I think there’s enough weight for the human side of it to be profound. Another example would be Ping Pong the Animation, which I really need to rewatch…

What do you think? Is it harder to watch the profound than the wholesome? Do you have a preference for either? Am I putting too much stock into this (as usual)?

7 thoughts on “Wholesome Versus Profound – One of Many Personal Predicaments”