WordPress notified me yesterday that my blog has officially been active for five years now. The Visualist’s Veranda, or as it was then called Criticism & Thoughts, hasn’t always been my pride and joy, and WordPress knows I wasn’t always incredibly committed to it, but it’s turned into something of a passion project to let loose my inner workings—mainly concerning anime and what-not. It’s given me a large network of comrades, a way to develop my critiquing style, and even my dream job of game-reviewing. Creating this blog on a whim (almost literally) five years back has been among the best decisions I’ve made in my adult life. I really couldn’t picture what life would be like without it.

In honor of the occasion, I figured I’d do something immensely cliché and look back on the history of The Visualist’s Veranda and make some comments about various things in the past and share some old articles I’m sure three people in total have perused at their leisure. Before that, however, I want to share the spotlight and list a number of people who have been important to me in some regard concerning this blog, whether because they’re constantly “liking” my posts or have become a reliable source of wisdom or intrigue within the ani-blogger world. 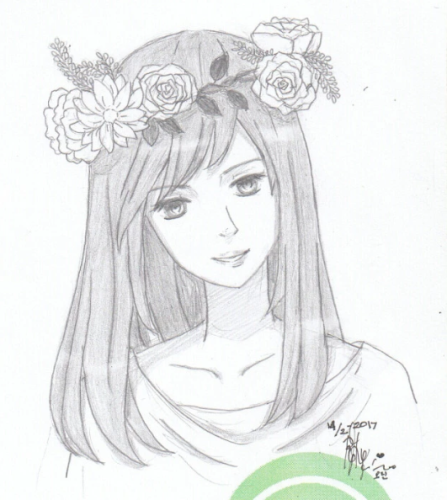 While not technically a follower (if my records show correctly), Yurichan is among the first blogs I ever recall following on WordPress (outside of contemporaries). Her blog contains (an albeit inconsistent) collection of artwork she’s drawn over the years, dating all the way back to 2015 (and prior?). I’ve liked a large number of her posts dating back to when I first followed her, and apparently she took notice.

Yurichan is also the first WordPress user to ever nominate me for one of those WordPress Awards. It’s a pretty inconsequential thing, but having a user (with whom one barely has any contact with) nominate you for an award completely out of the blue really makes your day. I’ve always appreciated her for that and why I still follow her after two-plus years. That and her artwork is pretty nice.

Who no doubt needs no introductions, seeing as she’s everywhere, is Karandi, host of 100wordanime. Like many in the ani-blogging community (more recently, seeing as Karandi only started up a little over two years ago), her influence was like that of a caring mother, always giving the moral boost necessary to continue going and making one believe that there is someone out there reading their posts. Her importance in the ani-blogging community isn’t only in her content, which is a consistent onslaught of intrigue and fair criticism (three posts a day!!!!!!), but her reach, extending to those who may be hovering around the corners, unsure of how to reach out into the general make-up of the ani-blogging body.

Aside from our current collaboration, the history between Karandi and I dates back to late 2016, about half a year after she started her blog. I was a semi-regular feature in her “In Case You Missed It” posts, and this dude noticed, so he took a peek at her own blog (nice advertising tactic). Like with Yurichan, I’ve followed Karandi for two-plus years, among the longest I’ve followed anyone on WordPress. Her blogging make-up is a perfect fit for anyone looking to explore the world of anime and join the ani-blogging discourse.

He will likely never see this as he abandoned his account many years ago, but a quick shout out to the person who inspired me to make a blog in the first place. His early posts intrigued me to think that I, too, could write a bunch of intriguing gobbledygook and post it for the world to see, on a platform designed to have the world see. While his blog didn’t last even a year, it will always be the spark that began Criticism & Thoughts, and for that,

Stop me if you’ve heard this before: Krystallina was among my earliest follows on WordPress. Her manga reviews are organized in a way that appeals to my compartmental senses, and have enough writing gusto to keep me coming back (assuming I have some interest in what she’s reviewing). What makes her part of this specific spotlight, however, is her dedication to my blog, as she tends to “like” about every post I ever publish (excluding the football ones, because no one likes those).

I’m not sure there’s ever been a person who’s “liked” more of my content in these last five years, despite her coming when Criticism & Thoughts was just starting to pick up traction in 2016. It may not always be immediately, but I can always depend on her to read and “like” my posts, even when I don’t expect her to do so. In terms of commenting, she’s also near the top of the list, beaten only by my own comments and Karandi, whose constant links to previous parts of our current collaboration more than likely take up a big chunk of that quantity. I never looked at the people who follow my blog as “fans,” but there are some who show the same dedication as that of actual fans.

And to those whom had appeared in a flash, only to disappear as their luster had shined brightest, know that I shall always remember you fondly. Blogging is a difficult thing to maintain and to motivate oneself into continuing. I’ve thought of shutting down this blog many times in the early days (evidenced by posts coming out a month in-between one another). It is with great pride when I say that I don’t see myself ending it anytime soon.

Now then, some posts: 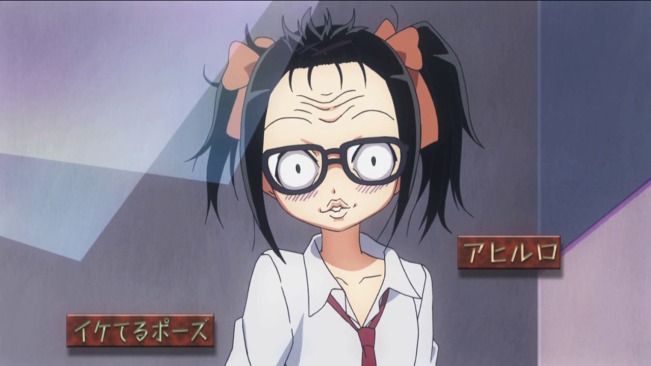 What’s remarkable about this post is the tone and style of commentary I choose to incorporate per review. More specifically: I’m trying very hard to sound like a smartass. Very dead-pan, very snarky. I’m in a period where I’m young and still trying to really figure out how I wanted to present myself. Here, I wanted to be like those Youtube personalities a la JonTron, Videogamedunkey, etc. Silly and zany, but analytical, too. It’s a period that would go on for a little while, and even now I employ it when I’m feeling particularly heated. It’s interesting to note how, at twenty, I was confident enough to make myself seem like an arrogant douche rather than giving people something serious to gnaw on before it got to that point.

This entry is a milestone because it is the first time I incorporated pictures into my posts. Nearly two years after I create my blog, I stop to think, “Hmm. Pictures would probably be a good thing.” What would probably be a default for everyone else has a two-year delay on me. Words are all that matter to me, supposedly.

Looking back, however, it just seems… wrong to not have a single picture in a post. A white wall of nothingness, only accompanied by the little specks of words that break up the monotony. Ick. Early on, despite my aloof writing style, I had a certain way I wanted my site to exhibit, even if my character wasn’t aligned. I’ve always been a minimalist, and the inclusion of pictures, early on, I felt were “unnecessary” to the real content: the words. Perhaps it was my stubbornness towards change, or perhaps fear to make a big leap into changing the style of my content. Whatever it is, it’s ancient history now.

Oh, and I guess the actual post is neat, too. Fairly analytical, with a few quips. Far more… “mature” than the Watamote post, but still early on in the molding of my eventual voice.

This post is not the most-viewed post I have on this entire site and I will not pretend it is. Write-ups including The Top 10 Worst Pokémon Moves, Thoughts on Excalibur, and Maximum Ride (Movie) Review all have more views on them in total than AM2R. My reasoning for highlighting this specific page, however, is because it’s the first time I managed to strike gold on a currently-trending topic. For whatever reason, I never managed to put two and two together and try and write on things that were currently an internet sensation (within my interests, of course). After publishing my review, its viewcount skyrocketed to over 500 views by the end of the month, a quantity I’d be lucky to see after a few years with any other post. I was flabbergasted and ecstatic all at once. I thought I’d made it to some level of internet success. But like with everything in life, it died down with time.

Since then, I made it a little more of a priority to watch out for things like that (along with an invigorated sense of “PLAY ALL THE FAN GAMES”) which may bring my blog some more notoriety. Of course, I’d have to actually be interested in it, but it was a point where I was thinking big about the platform of my blog and its range on the internet. It’s basically nothing now, but it used to be literally nothing, so, progress!

What this post signifies isn’t any particular “first” or practical achievement; rather it’s a piece where I took off all the safety hazards and threw myself out there. I explained my mind to the world, a mind that was still developing and still trying to figure out what I believed was “right” or “wrong.” It’s a piece that I don’t agree with anymore, as evidenced by my follow-up post, though its place in the Visualist’s Veranda’s history is paramount in just getting my thoughts out there. It allowed the world to pick it apart and give me different perspectives—those who did definitely had some influence over what would eventually come to be.

Top 10 Favorite Games After One Year with KeenGamer – September 12th, 2018

The final post will be something I wrote two weeks ago, as it transcends the blog into a world that my blog allowed me to work for. After a sort-of moment of “Why not,” I contacted a game journalism site and said “Hey, I like games and reviewing” and they said “What are your qualifications?” and I said “Look at this shiny blog!” and they said “Cool, dude. Welcome aboard.” Now that I’ve been with them for a whole year, I incorporated the best of both worlds, writing about what I’ve done there on a platform I’ve used for nearly five years to broadcast it.

It’s a post I’m immensely proud of, both in its content and the time it took to get there. It also serves as the closest point to the present me, the me that thinks with the surest of minds and beliefs—at least I think so. I imagine my mind will always change in some fashion, constantly doubting what is and isn’t worth adhering to and what it means to critique and write and what-not. It’s what makes life fun. It’s what makes blogging fun, what makes anime and video games fun to dissect. This top 10 is the latest of many more to come (probably) that has me looking at both the past and the future. Though the enjoyment of this anniversary post is in the present, so let’s get back to that.

Once again, thank you to everyone who continues to read and follow The Visualist’s Veranda. Know that I appreciate all the likes, comments (even bad ones), and subscriptions that come with my Youtu—Wordpress activity. Without any of you, I would very likely not keep doing this (evidenced by my now-deleted Football-oriented second blog). From the bottom of my nervous heart, I love all of you. Thank you, world.

10 thoughts on “Five-Year Anniversary Special: A Look Back and Special Thanks”