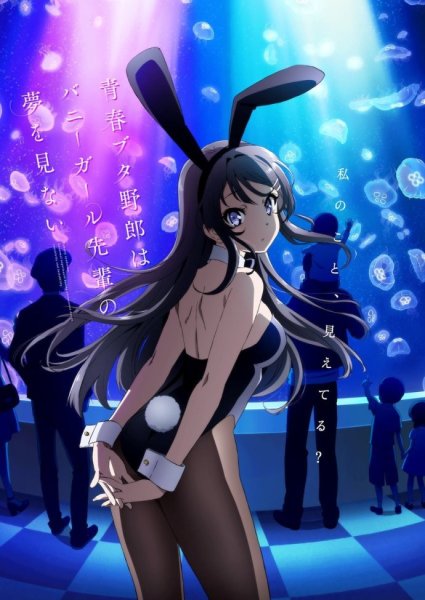 This cover is very misleading, the sole reason I didn’t watch this outright. The synopsis itself was slightly interesting, but the promise of a skimpy, beautiful senpai running around in a playboy bunny outfit prompted me to press the “skip” button. It wasn’t until fellow anibloggers began to compliment the series for the main couple’s great chemistry that I thought that, perhaps, I had glazed over something worth watching. Lo and behold, upon watching the first episode, I immediately downloaded and watched the second, and then a third later in the day. If nothing else, it hits the right notes early on.

I’ll talk about said chemistry between the main couple first and foremost. I’m in full agreement that the back-and-forth between the male and female leads is immensely charming and noteworthy. They feel like genuine people, joking around and taking chances in conversation, leading to grounded conversations laced in drama and sexual tension, but for good reason! Male lead isn’t the typical male lead archetype that’s 100% innocent and anti-sex that litters the anime industry and the female lead… kind of matches the strong and independent archetype whom tries to hold her own no matter the circumstance, but the male lead is more rigid in terms of being the lead. One of the series’ strongest points so far is the romantic development between these two characters. 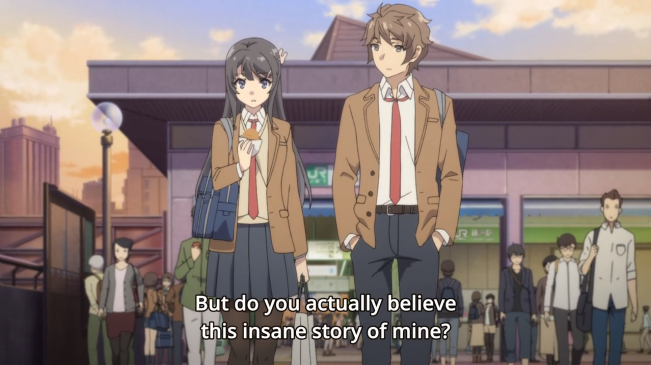 As for the rest of it, I’m severely skeptical. I’ll lead into this by stating a comparison: Bunny-Senpai reminds me of Isshuukan Friends except in reverse. Where the latter deals with a girl who loses her memory upon the start of each week, the former deals with a girl whose existence is erased as time goes by. This is a generalization to those who have seen it up to this point, but bare with me. Both series feature a male-female couple with romantic ties (or implied ones) predicated on a desire by the male lead to help the female with their unnatural situation. Both series also feature abnormal, convoluted sentient forces at work that defy the laws of everything logical to enact their sick game of psychological human torture (likely for “The lulz”). The previous sentence is an exaggeration, though a point I still feel rather strongly about.

One (cynical) person can look at this in two ways: 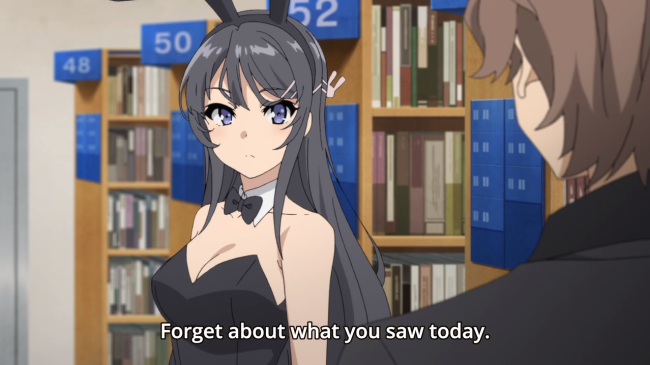 Now, if you didn’t take these things into consideration while watching this series, it may be a likely case of “Not Being Cynical (NBC).” Unfortunately, I have a widespread case of “Being Cynical (BC)” that enjoys hovering around my skull, resting (as) peacefully (as possible) within my brain. Observations like this are to be expected from me.

How does this all pertain to my overall impressions after three episodes? That Bunny-Senpai is an entertaining, but very, very dumb series. I am excited to see what the series decides to come up with next only because I think it will be hilariously outlandish. By no means do I think this is within the realm of “So good, it’s bad” territory, but there’s a certain quality to it that makes it very easy to be cynical of, if only for my personal view of the anime industry’s priorities. Even with this, the chemistry of the leads and the entertaining quality of the series in general make this a more recommendable viewing than otherwise, so if there’s any silver lining attached, it’s that the show is keeping me interested. It’ll probably interest you, too. Just don’t think it’s an ecchi based on the cover image (like me).