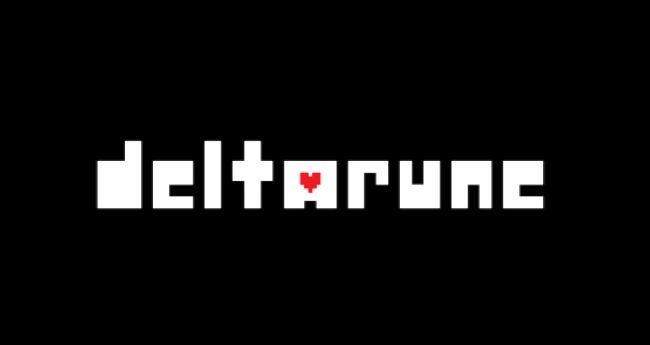 Didn’t think I’d be writing this up tonight. Lo and behold, Toby Fox decided to drop a surprise treat on the spookiest day of the year.

Deltarune is a… spiritual successor(?) to Undertale. It’s a sequel, with characters from the latter title making appearances, but the real stars of the story are completely different… or are they? (They probably are.) The adventure rings similar to the previous title, but there are little quirks to it that differentiate it as a different book in the same section of a library.

The plot to Deltarune reminds me a lot of Gregor the Overlander: a boy falls down into a dark void and ends up in a world not like his own. Some weird prophecy tells him he’s a chosen one and together with a rag-tag team of consistently-badgering teammates, they go on a quest to kill a source of all darkness. Some additional factors to Deltarune make it a tad more complex (not just a boy, but a girl falls down into the void; the writing is super satirical), which also creates an article of depth that keeps the narrative focused. The comparison is one that has other implications, however: the story is rather simple, and slightly too reminiscent to Undertale‘s THE POWER OF EMOTIONS!!! bravado.

For the moment, this game is only completed through chapter one. It took me a little over two hours to do so, with a slight portion of that dedicated to screwing around and interacting with people/things. How it ended, another comparison to Gregor the Overlander can be made: the boy returns to the “surface” and goes on, er, episodic adventures in the foreign place every so often. Should it do that, I would have no objections. I like that sort of storybook pacing that each chapter could create, with the world of characters that Undertale has created being more than likable enough to carry a somewhat trivial collection of plots.

What’s probably the most interesting non-change change is the gameplay direction of “Genocide versus Pacifist.” One can either obliterate enemies or interact with them in kooky ways to get them to stop fighting you. Frankly, the game is framed in a way where interacting with enemies are a lot more entertaining than simply killing them—as the enemies are considered actual people with people thoughts (albeit dumb) that one can sympathize with. Also, it’s a lot funnier. The previous means of dodging obstacles thrown at you by enemies is similar enough, but there are different ways in which that little box in the middle of the screen is manipulated to make it harder. I’ve been making a lot of “similar” and “different” observations in this post…

Deltarune looks a lot more like an RPG than Undertale did. The battle scenes involve the characters on one side and the enemies on the other, the pause menu includes equipment slots, the characters’ outfits are delightfully JRPG, and the world of the epic looks appropriately epic. I like the stark difference in character appearance between the real world and the fantasy world. Deltarune and Undertale have a penchant for deep, existential writing, with the latter doing so all the way through (mostly). This has more of a back-and-forth swing between weird and dark, which makes things a little off-kilter, but nothing so outlandish that it halts the mood. There was, admittedly, a spot in the middle where the writing took a joke a tad too far (as in it was overlong), which made the writing feel a little too self-indulgent.

I’m interested, most definitely. This could’ve passed for a whole game in and of itself, at least one for about five dollars on Steam or something. And I would’ve given it a generally positive score. It takes what made the Undertale formula good and tried to implement it into a more focused and flashy showcase. While not everything is successful (writing is still suspect when it counts), this is a more-than-recommendable start to an interesting series(?) that shows Toby Fox’s breakout work on full display… again… with shinier headlights.

One thought on “Thoughts on Deltarune (Chapter One)”