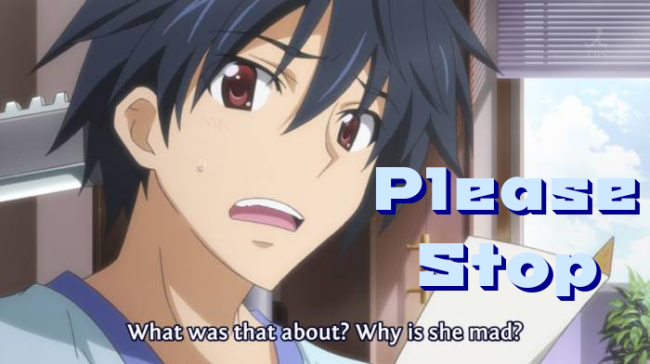 I am currently reading High Score Girl, which features a boy who likes to play video games and a girl whom he can never win against in said video games. As the story goes along, their relationship begins to grow stronger, until the coy girl begins showing signs of her romantic interest in the boy. Through their mutual interest in gaming, the two eventually bloom into a competitive, but supportive couple, where their everyday lives pass peacefully within arcades all around Japan.

I’m just joshin’ ya. I’m forty-five chapters in and the boy hardly has it registered that not one, but two girls are in love with him.

Through my reading, I’ve come to think about how prevalent the incorporation of the oblivious lead character is in romance stories. When one thinks of a typical romance, it’s a near-guarantee that the (near-guaranteed male) lead character is oblivious to some extent. It’s become so ingrained into the culture of Japanese-based fiction that it’s a rarity that characters end up being so straightforward. I complain above that after forty-five chapters I’m still reading about a lead character acting surprised about members of the opposite sex being attracted to him, but frankly, that’s pretty commonplace.

So I’ll say it here: Anime (and manga) should stop making this character trait so prevalent. Now, I shall explain the potential reasoning behind the morbid quantity of said trait and why it will never become less prevalent within the industry.

What is the motivation behind any business decision? Money, of course. So, one can easily assume that the reason for its widespread use is that it is profitable. To many, this could be considered a “Duh!” point, but I think it’s worth mentioning over and over and over so that no one will ever think otherwise. Anime/manga production is a business and they will do whatever they can to make a profit. Such is why trends become so commonplace every few years or so.

What becomes an issue within fiction when these trends become commonplace is that they become too commonplace. They become cliché, and those wishing for something unique or original will only be satisfied around the start of these growing trends. In the time I’ve been an anime fan, the oblivious character has been present far longer, and it did not take long for me to grow tired of it. If I go into a romance story and get any whiff that it may feature a dragged-out narrative due to a dense lead character, I shy away from it. I dropped Nisekoi because of this, Jitsu wa Watashi wa (partially) because of this, and considered dropping High Score Girl a few times throughout.

In both a defense of profit and attack on artistic integrity, the use of the oblivious character lengthens a story dramatically. More story means more potential developments and more time to ruminate in sexual tension, but it can also destroy a story’s pacing, having it move at the pace of my get-rich-quick scheme: horribly slow. Nisekoi is incredibly infamous for this, featuring a substantial amount of filler content that doesn’t really commit to the progression of its central plot. Of course, if one was to have a character just go straight for it, there would be essentially no story. Where’s the fun in that?

The incorporation of the oblivious lead also puts the author at risk of making their central protagonist, who should theoretically be the most interesting or charismatic character in the story, boring or, at worst, detested. The guy from Infinite Stratos, the guy from Boku wa Tomodachi ga Sukunai, the guy from To Love-ru… is anyone putting them on their Top 10 Best Anime Dudes of whatever-year lists? These characters are, from what I can gather, tolerated at best. They aren’t important to the story in comparison to the (occasionally dubious) intentions presented for the (usually opposite-gendered) supporting cast. That’s a huge chunk of story dedicated to screentime for the main character, who doesn’t really provide anything of interest. Why be lazy with it to this extent? Money, obviously; what all artists strive for.

What ultimately makes all of this a moot point is the very fact that it remains a prominent part of anime/manga identity. The do-good and always-pure nature of moral Japanese society would make it more easily accessible for a non-assuming protagonist to be relatable to the average individual. In a sense, it’s rather humble to not presume the intentions of those around one, whether friends or otherwise. After all, being wrong about sensing romantic tension is never a fun scene, and can potentially make a friendship extremely awkward afterwards. It’s a low-risk and “kind” (relative term) position to take, and I think people have welcomed it, if its popularity is any indication. If it remains popular, there’s nothing I can really do to change it. What the majority wants, the majority gets.

To expand on a previous point, the commonplace aspect of the oblivious lead may eventually boost it that of, what I like to dub, “classic status.” It’s a safe and proven method of storytelling, albeit formulaic, much like every Disney movie from the last fifteen years (take a shot). There’s nothing inherently wrong with using a tried and true method of storytelling, but it also makes it harder for other stories to find their own groove. Other pieces of media will likely feel pressured into appealing to some niche in order to obtain some profit. Eventually, every major studio will be instilling the same romance story over and over again, which will work for most, yet remain eye-gouging for cynical bastards (like me).

A boy and girl meet under unusual circumstances. Slowly, they grow closer. Eleven episodes pass as they get to know each other and make very subtle hints, such as a statement under their breath or small actions of affection, at their attraction to one another. In the final episode, they either get together or showcase their intentions through the strongest physical act of affection known to mankind: a firm embrace. This can also be slightly altered to have only one character be in love and the other is, as this post highlights, completely oblivious.

Their love, or unrequited pleas for attention, will last forever.

What do you think about the oblivious lead character trope? Is it a detriment to romance stories, or am I making this a bigger deal than I need to be? As always, thanks for reading!

6 thoughts on “How Dense Is Too Dense for an Anime Protagonist?”