In the far-back year of 2006, I played World of Warcraft for the very first time. The first character I ever made was a tauren by the name of Euripedes, inspired by a character’s name from Gregor the Overlander. He was a hunter, and while I don’t recall how high of a level I got that specific iteration, I later remade him when I got the full game and was the highest-leveled character I had ever worked on to that point (mid-forties).

Since then, the tauren race has probably been my most-played species, aided by the fact that they’re my favorite species in the entire game. (Draenei probably come in second in both factors.) Because of this, I have traveled along the starting area of Mulgore a couple thousand times—to the point that, more recently, I’ve tried limiting the creation of tauren. Even so, the grassy plains, while not the most interesting setting of the starting areas, serves as a place of nostalgia and comfort for me. And I’ve seen them so many times that I practically have the starting quests down to a science.

Starting off at a small encampment, the player is tasked with doing general things similar to that of all starting zones, such as killing specific creatures or fetch quests. In Mulgore, specifically, one is literally tasked with fetching a pail of water from a well, which has always been one of the most strangely fairy-tale-esque quests the game has ever assigned. After the first quest, the player is given an obligatory quest to seek out a trainer for their specific class, which is a useful tool to have, as new skills can be learned with every even-numbered level.

The starting area is designed to get new players ready for the bulk of the game, introducing them to core concepts and various challenges that await them on the outside world. It’s fairly difficult for one to die in a starting zone, as few enemies can damage one past three or four health without charge-up spells, which changes drastically directly after the starting zone. If a player were to do the absolute minimum required of them, they will likely leave the initial starting area either at the tail-end of level five or the start of level six. I tend to overcompensate, so I occasionally leave at the tail-end of level six. (Excalibur allows for double experience rates, so it’d be easy to leave halfway through level seven if desired.)

With Mulgore’s starting area, the most challenging task would be a collection of quests involving the aggressive quilboars centered in a far-off area called the Brambleblade Ravine. Not only will they attack the player when within range of noticing them, but it’s easy to aggro (game term for attracting attention) more than one enemy at a time. Again, it’s not easy to die within the starting zone, but more than one enemy outside it, especially if above one’s current level, is not a simple task. When deep within the ravine, one can also access a quest via dropped item that can add some bonus experience points and loot if one chooses to use their hearthstone (which transports one back to a safe zone; typically an inn) at that very moment.

When all the advisory (though not necessary) quests are finished, the player is tasked with traveling to the next major point in Mulgore: Bloodhoof Village. Here, one is overwhelmed with quests to do and a larger variety of vendors, space to travel, and subtle lore attributed to the tauren race. One tidbit about Bloodhoof Village is that it features a quest called “Kyle’s Gone Missing!” that was designed by a terminally-ill kid named Ezra Chatterton as part of a Make-A-Wish Foundation contribution. While I remember reading about it at the time, I wasn’t aware of how serious the condition was, as Ezra passed away a year after the quest he helped design was implemented. Ezra also provided the voice of this particular questgiver, who automatically speaks up whenever a player draws near.

On a non-depressing note, I have somewhat of an admission: I have never done every quest available from Bloodhoof onward in one sitting. I vaguely recall throughout the years picking at various quests with different characters, but never all in one collective, memorable fashion. The reason for this is that I’m typically at the level recommended to move on prior to getting to all the quests available (level 11-12). At the same time, there are a large quantity of quests available for one at Bloodhoof; I can pick up about six or seven quests upon arriving at the place and get them all done to massive amounts of experience. To do every quest available, I’d predict one would be at least level 13 by the time they’ve left Mulgore.

Aside from Bloodhoof Village, which has a large number of quests with varying tasks already, there are also some quests scattered around in remote locations, such as a traveling hunter(?) along the roads leading out of Mulgore that wishes for you to break up Venture Co. (more on them later) operations. I haven’t done his chain of quests for years, because again, I simply have no reason to, as the area gives me more than enough to reach an adequate level. When I get to Bloodhoof, it’s usually the same batch of quests: collect items from various creatures, drink a bowl of soup that makes you high, kill a bunch of poachers within the surrounding area, and “Kyle’s Gone Missing!”. Sorry, Dark Iron Dwarves, additional quilboar, and harpies—You’re low on my to-do list.

I do always make a note to kill Ghost Howl, however: a rare creature that travels around the base of Thunder Bluff, the tauren capital city (more on that later). Killing it rewards the player with a cloak that serves as a good starting item and a pretty easy quest that only requires talking to someone in Bloodhoof.

Aesthetically, the area surrounding Bloodhoof Village is very similar to that of all of Mulgore: very plain. (That is a pun.) Lots of grassy fields and trees that spring up every so often, with plateaus and hills that travel up and down dependent on the terrain. Some encampments here and there feature some manipulation of the land, specifically those by the Venture Co. group, who salvage anything for profit, and the Dark Iron Dwarves, who are among a race of people bound by archaeology. Red Rocks, which is set near Thunder Bluff, does away with grass and instead goes with what the title implies: rocky, mountainous terrain with a red hue. Again, not the most interesting setting in the game, but one that is consistent with the nature-loving tauren with little variety due to the actions of others.

The major areas in Mulgore (sans Thunder Bluff) are set up similar to that of indigenous people, complete with totem poles and huts and wooden structures. While the setting of World of Warcraft is implied to be in an archaic time period, various races (including dwarves) have a modern approach to their technological capabilities. (Mounts specific to gnomes are mechanical chickens.) Tauren serve as the more spiritual, traditional aspect of the game, with a lot of their tools being that which the world provides them. 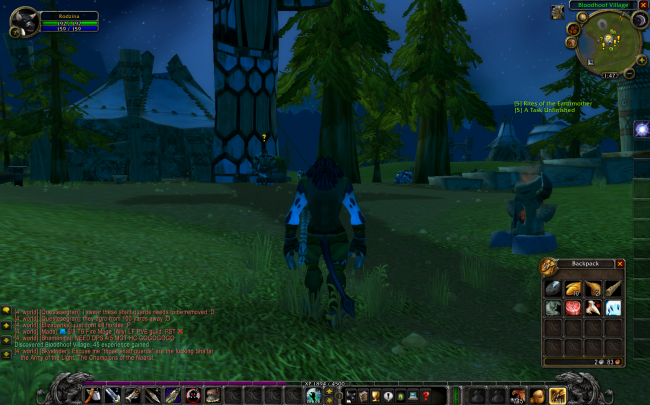 Among starting areas, I don’t think I would consider Mulgore my favorite, though that may only be because I’ve done it so often that I’ve become sick of it. I do quite like the Draenei starting area, which I’ll cover in a future post, as well as Elwynn Forest (human) and Tirisfal Glades (undead). I do like the abundance of quests available in Bloodhoof Village, but I wonder if it may be too overinflated, such that other available quests don’t get as much attention. The size of the initial starting area is a little large, making travel a little irritating, which pales in comparison to other starting areas like Durotar or Teldrassil. Quest variety is a little shot, too, as a majority are quests where the player is tasked to collect things or kill things in order to collect things. There may have been a reason why I grew tired of Mulgore.

Overall, a decent starting area. It has some merit as being the area attributed to my favorite race, as well as experience through multiple playthroughs. I wasn’t sick of it while collecting screenshots for this post, so that’s a good sign. Hopefully this didn’t lean too much on explaining rather than criticizing, as is intended with these series of posts. Thanks, as always, for reading!

For more posts on this topic, feel free to check out the accompanying archive!