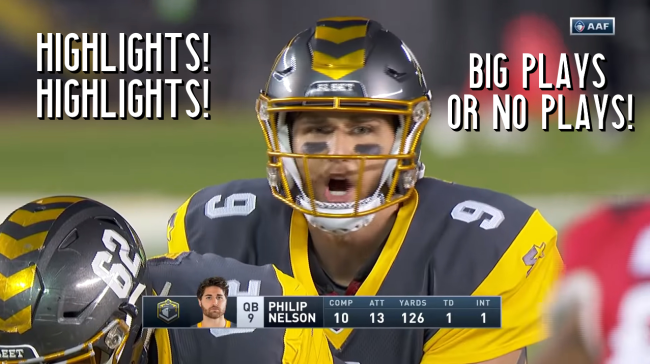 Through three weeks, the Alliance of American Football has put up, in my own opinion, a pretty commendable product. The games are typically close, and while they aren’t point-fests, plenty of big plays permeate the games that occur each weekend. Just last night, San Diego Fleet running back Ja’Quan Gardner pulled off an 83-yard touchdown run, the longest play in the AAF thus far as well as the longest play in its short history. It was a great, exciting play, which many saw happen… from the comfort of their homes, on Youtube, or on the official AAF website.

In my own research, I’ve come across an ominous realization: the AAF is not a popular league. That is, at least, in motivating people to actually buy product, tickets, or miscellaneous merchandise to help fund the aspiring league. On the surface, this wouldn’t appear so, especially if one were to browse around the internet for interest in the sport. The official AAF Twitter account has 238,000 followers, and is growing daily. Their tweets usually average a few hundred likes and fifty retweets (more during game coverage). Each team’s official Twitter account average about 35-40k followers, with the Birmingham Iron having over 50k. There is no shortage of coverage for the AAF, and from the outside, it seems to be succeeding.

Then you look at the stands at the games, and feel a pit at the bottom of your stomach.

Not a large crowd tonight here in Memphis.. #AAF pic.twitter.com/CTJQfnSwv3

The San Diego Fleet’s inaugural home game at SDCCU Stadium. Fleet lost to the San Antonio Commanders last weekend, but look to bounce back against the Atlanta Legends. #AAF pic.twitter.com/LgJPIrr4Ee

Though this looks tremendously gray, there are some silver linings to be had in comparison. The Birmingham Iron, through two games, average 17k in attendance. The Orlando Apollos average 20k a game through two games, and the San Antonio Commanders average 28k through two games. San Diego averages 17k a game, as well, though the second week took a dip from 20k to 14k in attendance. Those are commendable averages to have, especially for a league in its first year. However, the floundering results from the other teams (12k for Memphis and Arizona; 10k for Salt Lake City; 11k for Atlanta in their first home games) combined with the photographic/video evidence shown above that the attendance might be overinflated causes doubt that the cities these teams are placed in really want more football. The lack of people in attendance makes the online prominence of the league all the more baffling.

I recall something that my football-loving father once told me: going to a game is less about the game and more about the experience. There’s a certain magic to being involved with those among the stands, directly affecting the course of the game for the opposing team and being within the roar of passion for the sport. At the same time, one has to put up with parking, brave the weather, potentially deal with heckling fans, make plans throughout the day to get there on time, and, depending on seating, it can be hard to even see what’s happening on the field. More than anything, however, is what I consider the driving factor: it costs money.

It costs money to attend games, to pay for seating and (potentially) parking; to pay for beverages and food while at the game and any other knick-knacks and items that may suit one’s fancy. All of this, or, they can sit at home and watch a game in a much clearer capacity through numerous cameras on three different platforms (Youtube, AAF website, TV) without spending a cent. Which sounds more appealing to football fans? To people in general?

At the same time, why watch the entire game, which could contain boring bits like punting or good defensive plays that prevent points (but aren’t as sexy as interceptions or sacks), when one could watch ten-minute highlight videos that display only the good parts? That not only saves money, but time! Why go through the effort of actually supporting the league and instead put in the bare minimum of watching highlights from a league so alien to one that it may as well be a figment of the imagination? 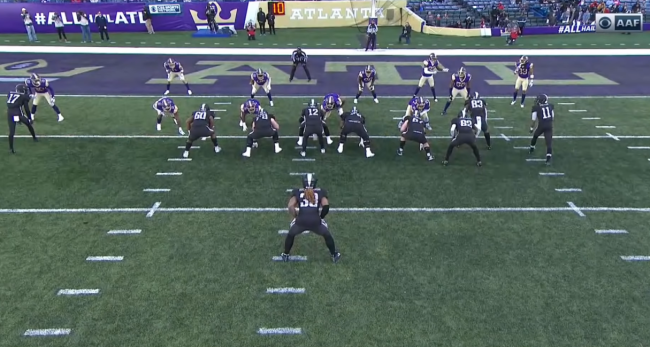 But I’m being cynical. It’s entirely possible that many of those viewing these videos or liking/retweeting highlight tweets from the league are those incapable of supporting the team financially. Perhaps they’re too young, perhaps they’re not financially stable. Maybe all they can do is watch and give a view or a sign of confidence in the form of sharing the content. Despite the attendance shortage, the television ratings are reportedly decent.

The success of the AAF already has a solid foundation with the popularity it has garnered on social media and video-streaming sites. To truly stay alive, the league needs to have people willing to pay to attend the games, which likely remains the primary source of the league’s income. Even if they don’t attend, the league should be relieved that the fans were willing to invest in a potential “Next big thing.” I’m personally hoping the league succeeds, as I’ve enjoyed following along with the players and the teams, though I can do little but write articles detailing the issues that plague the product in the hopes that they can be addressed. Ladies and gentlemen, if you want the AAF to live for another year, support them through attending the games and buying a bunch of stuff! If not, there will always be the highlight videos.