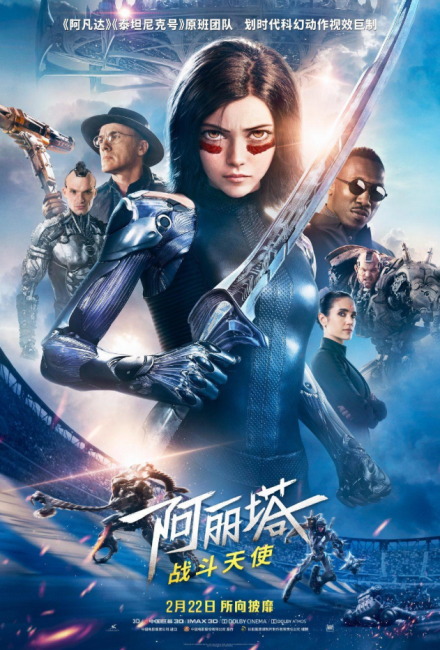 (I know the poster isn’t in English. I just prefer this image over the alternatives.)

When taking in the trailer for this film for the first time, a few things came to mind. I thought it looked anime-inspired (actually based on a manga from the ’90s). I thought it looked like it would be all style and no substance. And I didn’t think I would see it. “From the producers of Avatar and Titanic” didn’t help that much, as I think both of those films are dreadfully overrated. Little did I know that a couple weeks after that time I would suddenly have the urge to see it, enticed by the lukewarm reviews it was receiving from the general consensus of critics. Not to imply I thought the movie looked bad, only that it didn’t look to appeal to my standards. After seeing it, I can readily confirm that.

This is a rare case where a film is broken down neatly into similar-sized parts in my brain. I was almost alarmed by how neatly it condensed itself into the narrative one typically associates with a hero with amnesia, ripe with “the chosen one” messaging throughout. To say that I have seen this film before, if only for the formulaic shell that the narrative embodies, would be almost accurate. With that in mind, it’s easy to see how the story will progress, with the typical small twists and turns that often reside in similar scenarios. Additionally, much of the beginning is simply a set-up game to prepare for bigger revelations and resolutions.

I compartmentalized it like this: The first forty minutes were fine, most of which was the introduction of Alita to the world and the characters who inhabit it. The next forty minutes were pretty boring, full of scenes that only delayed the inevitable and took full advantage of the overly-cheesy dialogue that is a plague upon this movie’s existence. This section of time also displayed the most of Alita’s preteen-heartthrob, hottie boyfriend in Keean Johnson, who was pretty boring throughout the entire film and, in my theory, was only put in there to cater to the YA crowd fresh off the heels of Hunger Games, The Maze Runner, Divergent, etc. I didn’t have much of an issue with Johnson’s acting, but his entire existence within the film feels like fan service and it seriously rubbed me the wrong way.

Alright, so I looked it up on Wikipedia and apparently his character actually exists within the manga source, but he and Alita never end up as a romantic pair. I guess my theory is somewhat valid?

It was the last 35 minutes that I thought were decently immersive, and the best section of the film. Lots of scenes had actual stakes and were built up to splendidly. Predictable as some things may have been, seeing it all come together nicely in the end was enough to get me to look forward to the sequel outing. Despite some painfully corny dialogue near the very end, I thought the resolutions to these characters ended up slightly making up for the middle portion… but seriously, the dialogue was absolutely abhorrent. By far the worst part of the film, if not the YA audience pandering.

Enough about the story, I’m sure the name of the game here is special effects, of which are definitely really good. Alita herself, in some parts, looks as though she isn’t even CGI. The progress we’ve made with digitizing human beings within special effects has come a very long way, and soon enough we won’t even need actors; everything will just be computers. The scene settings all looked dazzling, even if a lot of the weight they could have was lost in not exploring them too deeply. There’s even a wide variety of things the film focused on, including dark and ruthless racetracks, a busy main hub in the middle of town, underwater scenes, alien spaceships, and others. There’s always something really neat to look at in just about each scene, including the bug-eyed star herself.

Like probably everyone else, I was initially hesitant on the anime-esque design of Alita, complete with bigger eyes. Thankfully (perhaps because I’m a weeb?), I got used to them within the first ten minutes of the film—sometimes I forgot she even had bigger eyes. Alita as a character is also a strength to the film, as she’s strong in her convictions while also struggling to cope with the weight of her situation. While docile at first, she eventually becomes stronger in her willpower and more capable through the trials that face her throughout the film. I enjoyed seeing her growth and wouldn’t hesitate to call her a good lead character. Y’know, aside from her dialogue. “You’ll come to regret this… underestimating who I am!” Oh, my loooooooooord. 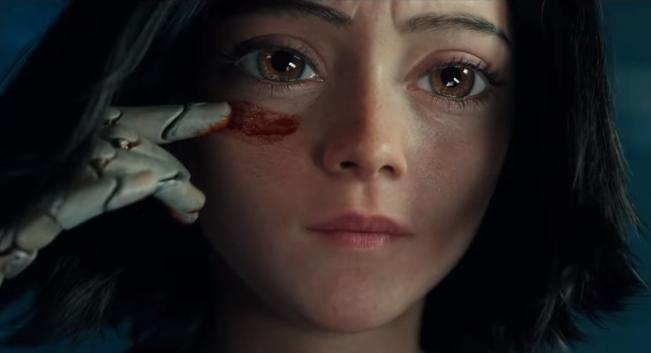 Other characters didn’t fare too well, unfortunately. Doctor Ido, who took upon the role of guardian for Alita after finding her in a scrapyard, has some importance early on, but is pushed aside later after he serves his purpose. After Alita is [redacted due to spoilers], he almost seems to give up on supplanting himself in her life and kind of just huddles up in a corner of his workshop. He has some darkness attributed to his past, which was slightly interesting, but one doesn’t see much of it aside from his desire to care for Alita. I wouldn’t expected something along the lines of PTSD or some mental wear and tear in smaller bits—instead he’s more just an overprotective father. Keean Johnson is Keean Johnson.

There are minor characters that provide some varying importance, some occasionally only in convenient moments, which don’t share the same strength as the leading lady. Of all of them, I would like to note Jennifer Connelly’s character only for the sake of calling out her actress for being bad. Jennifer Connelly is pretty bad in this film. Her dialogue certainly didn’t help, but she was such a wispy character that she almost seemed like a ghost, even in her moments of humanity and determination. Every time she was onscreen, I noticed a slight plunge in the quality of the scene, particularly from a realistic standpoint, so she was almost a nuisance entirely throughout.

Then comes the action scenes, which I heard a lot of praise for coming into the film. I can’t say I share the same enthusiasm, especially early on when I didn’t care about anyone or anything that was happening. There’s a scene where a certain sport is introduced that’s supposed to be ultra-tough and life-threatening, but it did absolutely nothing for me then. Later on in the film, when Alita was better developed and she, herself, participated in a match against hostile co-players, I was a lot more entranced by it. I can only insinuate from that that action means squat to me unless there are stakes to be had and characters I care about at risk for harm. Might be why I didn’t care for John Wick. All in all, pretty mixed on the action sequences.

If I had to describe Alita: Battle Angel in one word, it would be “Tried.” It’s a story that has been done before many times, with a sort of formulaic approach to storytelling that James Cameron (who didn’t direct, but produced this) has almost trademarked. The special effects are definitely a selling point, and I’m pleased to find myself caring for the title character in Alita herself, which is often a mixed bag with these kinds of films. It felt a little bit more like a YA sci-fi fantasy feature than an anime film, which was also somewhat surprising. If I had to recommend it to anyone, it’d be to those who don’t care for complex stories, as this one is pretty straightforward and formulaic. Everything else will likely be, at the very least, tolerable.