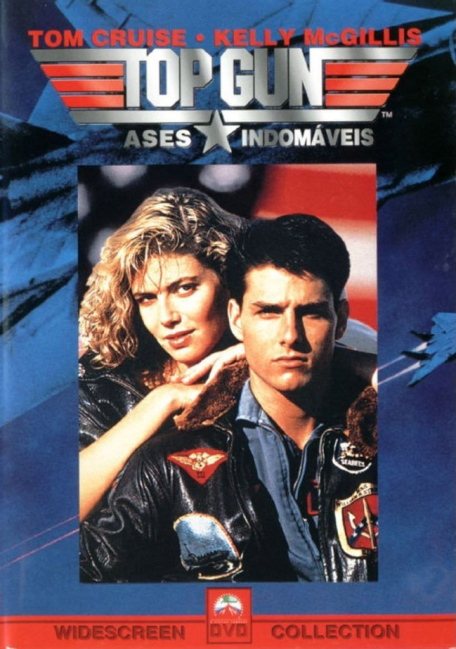 Another film within the history of cinema that has a reputation for being a classic from the ever-beloved 1980’s, while also sporting a “kick-ass” soundtrack. I find it similar in many ways to Ghostbusters, which also receives a boost in memorability through its soundtrack, its place within the 1980’s, and appeal-to-everyone nature. There are, however, distinct differences between the two, of which I will document within this post, that ultimately pit the two on different planes of an entertainment entity.

I recall one day while working my retail job when the radio within the store started playing “Danger Zone” by Kenny Loggins, which is often synonymous with the film I’m currently covering. One of my co-workers started singing along, to which another commented on it. This small exchange eventually led to one asking the other if they had ever seen Top Gun, which came with a “No.” The immediate response was an incredulous cry of “You’ve never seen Top Gun?!” I decided to refrain from stating that I had never seen it either. In the 0.000000001% chance you’re reading this, my dear co-worker, here’s to you—though you may not like what’s to follow, if the tone of your voice that day was any indication of your opinion on its quality.

Like injecting pure testosterone into the middle of your pupil while heavy ’80s hair metal blasts into your ears and corrupts your brain. Girls dancing around the club, looking pretty and easy, their blonde hair and tan-white skin glistening from the perspective of your burly man’s vision. Death, pride, reckless abandon. Competition reigns, inherent talent trumps the intensity of working for the glory. Emotions for the fallen soldier, as we push through the grief and carry out our passions in their honor, uplifting the souls of the past with the accomplishments of the present. This is a MAN’S film. [HIIIIIIIIGHWAAAAAAY TO THE DANGER ZOOOOONE!] All tough and glorified and with just the right amount of cheese.

Basically why I didn’t care for it.

I don’t think it’s bad, though—quite the contrary. I think for those in the mood for some decent thrill and the tension that comes with performing to expectations, this would be a good fit. I understand, after seeing it, why this is considered a classic. The only issue for me, who currently lives in 2019 and was raised upon the culture leading up to this point (starting from 1993), I cannot for the life of me connect with it. Much of what this film tries to convey is such an archaic representation of masculinity and heart to me, and it couldn’t be more clear to me [Take my breath awaaaaaaaaaaay!] than upon watching the last thirty to thirty-five minutes of the film’s run.

So Tom Cruise’s buddy in this film, affectionately referred to as “Goose,” probably because he’s tall and lanky, dies in a training accident, and Cruise puts the blame on himself for it. I was a little taken aback by this drastic turn in storytelling, which is good, but the reaction to it felt… really off. Obviously guilt-ridden, Cruise is moping along and can no longer unlock the potential he had as a top-class pilot, and even quits for about five minutes. The reaction to this by other characters is unanimous: he’s a quitter. He’s turning his back on what he loves to do because it’s his destiny to always come in second place; always talented, but never committed. 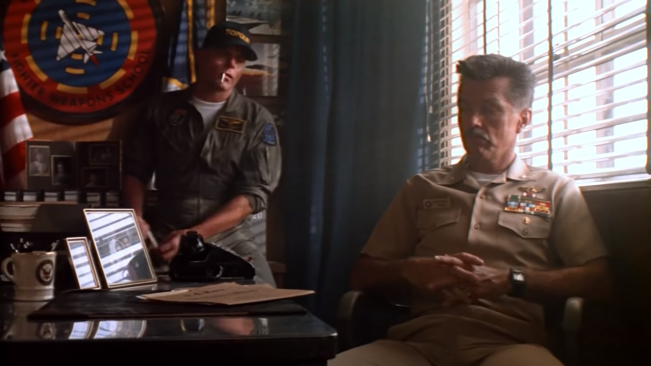 Uh, excuse me, his best friend fucking died? Like, a few days ago? [HIIIIIIIIGHWAAAAAAY TO THE DANGER ZOOOOONE!] He was, in his own words, “the only family he had left,” and he was in the jet with him when he died, cradling his corpse in the water below as the jet crashed. That’s pretty fucking hardcore. What is with this incredible lack of empathy for this guy? What is this message of “Yeah, you should feel sad about your friends, but you can’t let it get in the way of your duty”? Can he not just quit? I personally wouldn’t blame him! I don’t know if I would be able to handle the ghost of my actions if I were him. It just felt so heartless how everyone was giving him shit for his grieving. Again, though, it was a different generation. If someone kicked me while I was down, I’d likely just tell them to fuck off and double down.

What were probably my favorite scenes in the film were the ones up in the air. Scenes with characters flying in the jets were executed pretty well, leaving just enough to the imagination to make it seem everything was happening in blazing succession. The film actually opened with a flight scene [Take my breath awaaaaaaaaaaay!], which I thought was a good choice, as it set the tone early and showcased the attributes one can expect from the major cast of characters. While I didn’t think they were all good—specifically those preceded by circumstances that made it easy to predict the outcome—they were a good source of thrill and that didn’t disappoint.

What did disappoint were the characters, all of which I was pretty mum on outside of Goose, who I thought was a decent comic-relief character. The most blatant use of this generation’s perspective came from the lone (major) female character, whose role is to have sex with Cruise and that’s it. Sure, they have some snappy back-and-forth prior to the inevitable get-together, but one could really write her out of the film and little would change. Her entire role is to fuck Tom Cruise. Some women would be thrilled by that, I’m sure, but I think it’s tacky, to say the least.

Speaking of Tom Cruise, he’s kind of written like an OC (or “Gary Stu”) in Top Gun, I think. He has all the talent, the looks, the body, the entire plot revolves around him, every character zooms in on him like a target, he “gets the hot chicks,” [HIIIIIIIIGHWAAAAAAY TO THE DANGER ZOOOOONE!] and is generally pretty flawless, lest the script calls for him to not be. It kind of alienated him as a character to me, one who wishes to relate to characters in a non-superficial way, and this film certainly didn’t do it for me. I have heard rumblings online about how Tom Cruise tends to take on roles that paint him in a very positive light, and Top Gun is certainly prime evidence early on in his career.

It’s fine. That’s all I can say about it. I can’t say I liked it as much as other cult classics from the era, such as Ghostbusters, but there were definite moments of entertainment that made me understand the aura of “classicness” that exudes from it. It’s straightforward, it’s cheesy, and it’s a feel-good, underdog(-ish) story about a bro being a top-class bro. I suppose the soundtrack also helps. Though I can’t quite recall what was used in it, for whatever reason. Maybe with time it’ll come back to me.