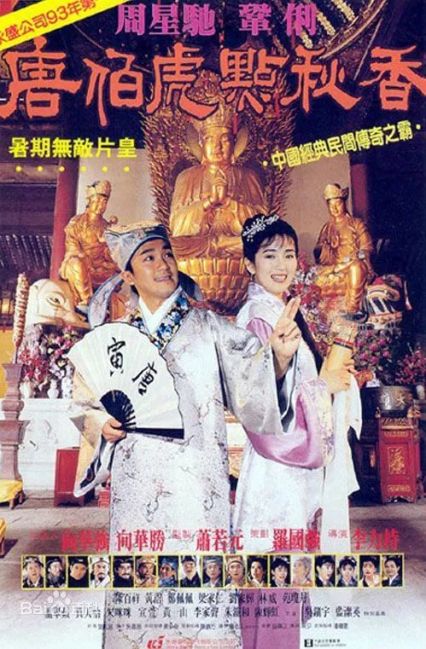 I stated before that I wouldn’t try to force in any anime films, but that doesn’t mean I’m staying out of Asia.

I’m planning to leave this piece rather short, as I feel that the experience of this film is better suited blind than otherwise.

There’s an actor by the name of Stephen Chow (who also stars in this film) that is apparently a famous name in the Asian film market. While I’ve never heard the name before, his discography is hard to match. Looking into it, I’ve found that Mr. Chow was involved with 54 films between 1989 and 1999—a ten-year stretch. That’s an average of five to six films a year. That’s kind of amazing.

What does one think of when they think of comedy films? The older approach to comedy a la slapstick and visual gags? The modern approach, where dialogue takes precedence and the absurdity of a certain stigma is blown up to blimp-sized proportions? As an American, there’s a certain expectation with a comedy film (especially in this age) where characters simply have to act awkward or unkempt in various situations to ruin the mood, or make wise-cracks every other minute; all of this on top of a normally-unusual scenario. Going into The Flirting Scholar, I was intrigued by how far the humor would go to match these ingrained aspects. Some did, but the general presentation can be described in two words: fucking insane.

To some degree, I find myself rather anarchist in reference to my tastes. There’s a weird magic to outright absurdity and a shattering of formula that makes me squeal in delight. At the same time, I’m a rather astute person, who thrives on the security of reason and formality. These two tend to butt heads especially within the realm of fiction, but The Flirting Scholar may have given life to a kind of schematic that adheres to both of these sensations.

For those familiar with it, Kung Pow: Enter the Fist has a very aloof way of presenting its central narrative, in that it almost doesn’t matter because the comedy is what it aims to indulge in. The Flirting Scholar is almost at that same level, except it takes itself seriously enough through a provocative emotional foundation to have the characters be, to whatever degree, empathetic. Still, there is an insane level of energy and style to this film that has not only enraptured me with its fast pace, but has made me want to look at more of Stephen Chow’s work.

And it’s actually decently funny! Perhaps the anarchist in me believes so more than anything, but how this film managed to whip anything out of nowhere with no context, and still have it somewhat relevant to the current scene, is something that’s rare in cinema in general, not just comedy. I’m almost in disbelief myself, and I just watched it hours ago.

Though it isn’t entirely great, as some soft patches persist throughout the film that are either not that funny or just feel a little too serious—which clashes with the lighthearted comedy the film has in most other scenes. When it thrives, I would wager anyone would be pleasantly amused. When it doesn’t, it’s a bit of a chore to sit through.

Like with the last film, The Flirting Scholar is available to watch on Youtube. With such a convenient platform, it becomes easier to give it a shot. Some experimentation can definitely do one good, and this is a film I would absolutely commend for its spirited presentation and simple premise. I only hope this wasn’t the high-mark for Chow’s career… I guess 53 more films will show me if that’s the case. Pray for me.