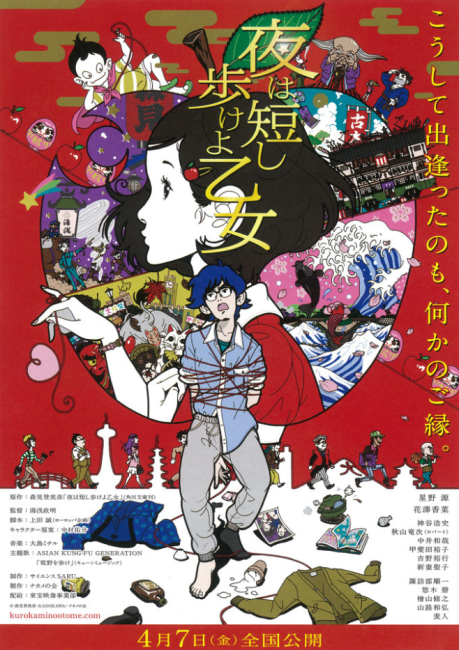 Many years ago, I watched The Tatami Galaxy, which the creator of this film is also responsible for. I thought it was a good, but not great representation of the anxieties of life and what have you. It’s considered a darling piece by many anime connoisseurs, which I understand, but I always thought the series was somewhat overrated.

With The Night is Short, Walk On Girl, I think the feeling that was so familiar to me then has resonated again in full force, as there are a lot of similarities between the two stories. This is also considered pretty good by the more “refined” anime consumer base, and again, I find it to be slightly overrated.

I liked it more as it went along, with the story slowly binding itself with the connection of characters as it reaches its end. This is most accurate when I think the last fifteen minutes of the film is the best part. Before that, though, there’s a bit of a mix of ups and downs that hamper the progress it could’ve made through its course out to the seas of human empathy. After all, from what I could tell, this film is trying to instill upon humanity the benefit of living life to its fullest.

Such is only the major part, while all sorts of minor messages are incorporated through vibrant and quirky animation, which was the best part of this film. Unfortunately, I felt much of it was a little too on-the-nose and not capable enough to hold itself without a prop to make everything abundantly clear. Almost like the creator is holding up a picture of someone sitting in a room by themselves doing nothing with a big red “X” through it.

What keeps the film afloat comes through the characters and the art/animation department. I liked every single character, and a few of them I was actively rooting for by the end. While most aren’t too developed, they work off each other enough to make for humorous and (perhaps too) insightful conversation. If that isn’t enough, the art style and zany interpretation of events are incredibly charming, especially to an artsy-fartsy guy like me. The whole scope of the film feels very weird, like it’s both an anime and not an anime; a mix of everything and the spirit of abstract storytelling.

This is one to see, especially to those who liked The Tatami Galaxy. While I had issues with the pace near the beginning and the overt style of symbolism, there’s enough here to make for an interesting (if not entertaining) viewing for any anime consumer. Basically, I think it’s worth it because it’s different. Different is almost always good. And it’s pretty feel-good, which doesn’t hurt.