While I can’t say for sure as my memory isn’t the greatest, finishing this film has cemented it as the oldest film I have ever seen, dating back prior to my grandmother’s life. 1926. You could fit almost four of my current lifespan in the time since then.

As one can probably tell from my blog’s content and the extent of my letterboxd profile, I’m not hugely interested in silent films. To some degree, I almost find it a primitive and straightforward style of storytelling that, on a general basis, doesn’t interest me too much. Favoring complex plotlines and characters, silent films often go ignored. Today, I decided to watch my first silent film that wasn’t mandatory for a college course, starring a man I had learned about from said college course.

Buster Keaton, who is often regarded as a legendary performer during the era of silent cinema, is most known for his stoic expression—the constant stone face he employs regardless of the circumstances he… faces. At the time (roughly six years ago), I found myself immediately connecting with the man’s stage persona; after all, I was a stoic dude who enjoyed messing with people by keeping a blank face at all times. I always remembered the name (partly because I had a childhood friend named Keaton), and had planned to look at one (or more) of his films eventually. I didn’t think it would take six years, but here we are. 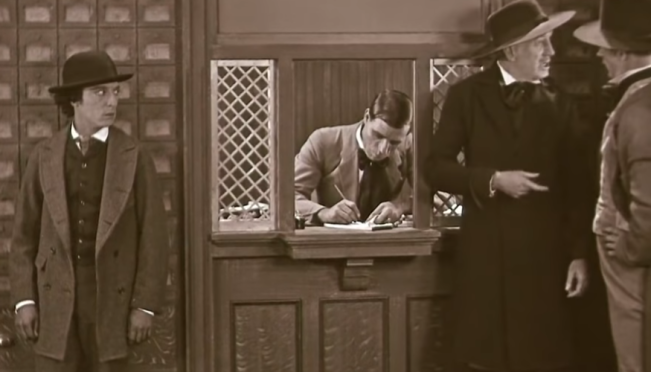 Straightforward? Pretty much. Entertaining? Surprisingly, very much so. Keaton has a certain bravado to his performance that makes the viewer watch every movement of his to detect little details within the comedic sequences of this film. It’s not that hard to do so, either, since Keaton is as dexterous as a jungle chimp, holy moly. Contorting his body in every possible shape to narrowly avoid horrible bodily harm seems to be his forté, as the stunts he performs (with seemingly no double!) are definitely not worth the sake of a dumb movie. Not to say this movie is dumb, but in hindsight, death is not worth a more gripping movie. It’s really not worth it. Good on him for being determined, nonetheless.

Straightforward as the story is, there are little trinkets of intrigue to them that make this a little more intriguing to watch. To summarize, this film takes place during the American Civil War of the 1860’s. This film takes place from the perspective of the South, which is something more than a few critics have pointed out as an “Uhhhhhh…” point. Despite this, I don’t think this is necessarily a film that demonizes or glorifies either side. There’s simply one side against another, and the innate antagonism between them could be as simple as black checkers going against red checkers; ultimately, it doesn’t matter much to me. If anything, this film glorifies enlisting in the army… and that’s an “Uhhhhhh…” point for me.

These trinkets come through a variety of little obstacles that coincide with the progress of the plot, which winds somewhat into two long segments: the chase and the escape. A man (Keaton) wants to enlist in the army to fight the North, partially to impress his girlfriend, but his state refuses him because they feel he’s better as an engineer (and don’t tell him that). Not trusting his word that the state refused him, his girlfriend essentially dumps him, which cuts to a random year-long skip. Northern forces hijack a train and bring it into enemy territory (while coincidentally holding Keaton’s girlfriend hostage), which leads into the beginning of the “chase” segment. Keaton, without a shred of hesitation, climbs aboard a vacant train and follows the northerners.

Here were my thoughts heading into this development: Keaton would eventually catch up to the northerners, somehow overpower them, and bring back his girlfriend triumphantly, earning the respect of his peers and his girlfriend’s family. Nope. What is to occur is a lot more muddied and borderline inept, which suits the folly of his character, who is constantly shown to be clumsy and incapable of “manly” feats. What I found most impressive, however, is that the damsel in distress actually fucking does shit! Holy hell, this film’s progressive! Escaping from northern lands, she actually assists in derailing the pursuit of the enemy, keeping their escape train steady and running, and making sure Keaton isn’t killing himself. It isn’t that much more that anyone in her position would do regardless of sex, but the fact that she is doing her part despite her status (especially back then) is super refreshing. Keaton even (playfully) starts choking her after she shows how ignorant she is of locomotives! What?! Hey, all anime, America’s been showing you up since 1926.

Except there’s one scene where she randomly picks up a broom and starts cleaning the train, which is played as a joke, but… c’mon. 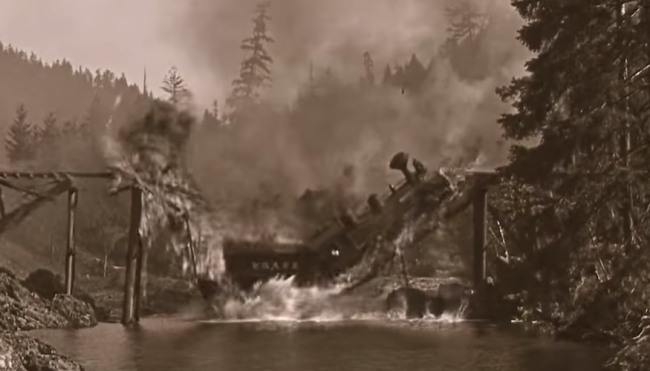 On a technical level, there’s a lot here that’s great even by today’s standards. I know a lot of critics who are very vehemently pro-practical effects over special effects, and I’m somewhat in the same boat, which makes The General all the more enticing to watch. No special effects in 1926; pretty much everything was practical. Lots of steam trains on display here, complete with not one, but two long chase scenes involving multiple trains and expansive amounts of land for travel. Forward and backwards and crumpling and dismembering and crushing and even complete destruction! These locomotives go through hell for the camera, with those who man them all the more incapable of getting everything under control on a moment’s notice. The amount of people in each scene, the timing it must’ve incorporated to have everything go exactly as was to eventually show onscreen is a marvel to think upon. This is technically considered an action film, and by the merit of high-speed chases and vehicular demolition, it earns that label. Very little physical altercations between people occur, up until the very end where all-out war goes on for mere minutes.

The silence, I don’t think, hampers much of the film unfolding. This is truly a visual piece, with anything sound-related being relegated to mood-altering soundtracks. There was some dialogue presented onscreen every so often, and while I don’t think everything being stated was really necessary, it did what it could to provide the developing conflict without appearing too frequently, which would’ve hurt the pace of the film and/or current scene. There were a couple scenes where characters were clearly talking and no dialogue came up onscreen, which felt a little awkward, but these instances were few and far between. I liked the selection of music that accompanied a majority of the film and the visual aspect of the film was probably as impressive as a film from 1926 could’ve been. I was certainly impressed with it.

It’s good, it’s short, and it’s on Youtube. If one has ever been interested in seeing a Buster Keaton flick, a silent film, or simply expanding their palette of films and want to go back to the country’s roots, I’d absolutely recommend it. It’s still fairly entertaining by today’s standards, with enough “oomph” to its story and characters to make it partially relatable and charming. It may not blow the general viewer away, but cinephiles will likely ooze over the production and visual effects at play. I’m glad I remembered his name.