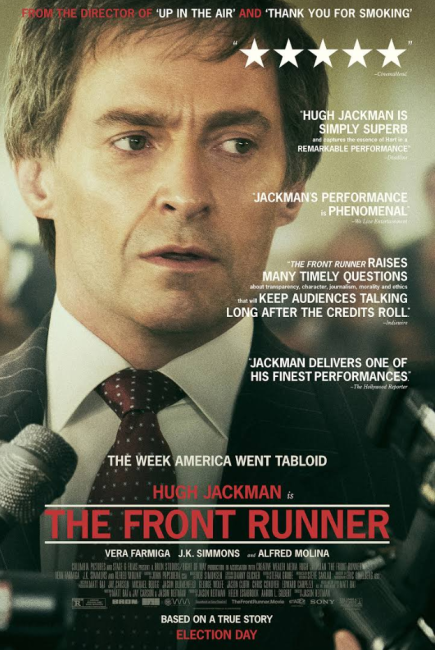 I made a really smashing review yesterday. I was quite proud of myself. I went ahead and went over the limit of the words I typically use when describing a movie. My accomplishments as a critic really speak for themselves, and I think it’s important to note that…

What’s that? A rumor? About me?

…Cheating? I’m single, who did I cheat on?

A spelling test… in fifth grade. Really? What the hell does that matter?

Is it true? What does it matter to you? It’s none of your business!

What does this have to do with my reviewing skills? My words now are what’s important—what?

People are more interested in me cheating on a spelling test than my review work? Well that’s dumb!

The media is making my family’s lives miserable? God damn it.

Fuck it, society doesn’t deserve me.

And that’s it. That’s the entire movie (altered to suit my person). Well, in a very simplified nutshell version, but that’s the extent of what people scrutinize it for.

The Front Runner, outside of some minimal ideas thrown in for the sake of it, is a pretty middling affair. Some weight comes and goes as the characters onscreen present basic human competition and the country’s inherent need for purity, integrity, and change, whilst adhering to every opposing viewpoint for the sake of personal gain. There’s one scene where one guy claims that they, as a news station, have to cover the scandal surrounding the main character, Gary Hart, because they would be blasted by everyone for not covering the story. Integrity cracks under the pressure of viewership. The film never seeks to answer any of the questions it raises. It really just brings them up to open discourse… maybe?

Hugh Jackman’s pretty good. Performances in general were alright. Pacing was slow and dull. It’s saved by the merit of wanting to say… something. Fairly interesting to someone who likes the details of history. A very depressing film, especially for someone who lives in America and understands the struggle between power and integrity.