There are a few things I should state beforehand which may lead to the understanding of what I expected going into this infamous film. First, I used to watch an internet personality called The Nostalgia Critic quite religiously. The Critic’s shtick was very similar to that of Youtube’s The Angry Video Game Nerd, only instead of video games, the Critic focused on classic films. One of his earlier reviews was this film here, Super Mario Bros., in which he went on a tirade about how inaccurate and shitty the movie was. Since that point, this film was one I figured I’d never watch in my entire life.

Another thing is that I absolutely adore the Mario franchise, along with Nintendo as a whole. They were the franchise that introduced me to the world of video games and, aside from the Wii U era, has been a company that has kept me delighted with its constant influx of games and spirited enthusiasm. Knowing that a film studio decided to take the company’s flagship franchise and make it into a general-audience, watered-down, weird action/comedy amalgamation just didn’t sit right with me. Even just watching the film now I kind of sneered at the decisions the film made that were obviously implemented to suit a “wider audience” appeal. With these things in mind, I went into this film with the absolute lowest of expectations.

I came out of it pleasantly amused. 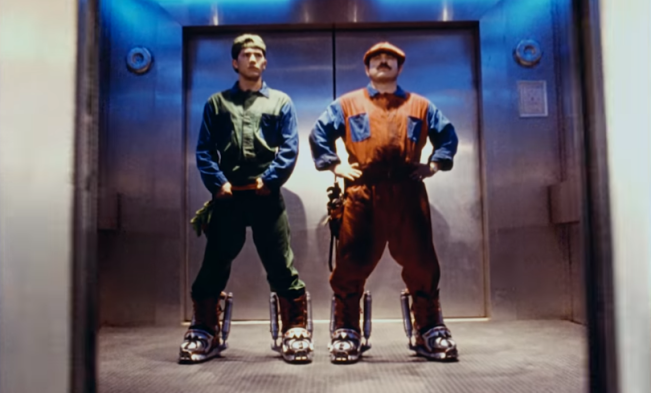 Bear with me for just a moment. Let’s pretend, just for now, that Super Mario Bros. is an original work. Hard to do, I know, but let’s try. Goombas are reptilian, “de-evolved” versions of “regular” people, Mario and Luigi, the main characters, are literally called Mario Mario and Luigi Mario. (Fun fact: That’s canon.) Bowser is human, and his name isn’t Bowser, but Koopa, which makes the names of the koopa underlings (never addressed in this film) more confusing. Princess Peach does not exist, but Princess Daisy does—and was hatched out of an egg. Luigi is definitely not Italian, and is vaguely implied to not actually being related to Mario. These are the changes one will have to get used to, and more surprises are to come.

All of this in mind, this is a really dumb film. Not much of it makes sense and it seems a little too meta and weird to serve as anything, er, constructive. It’s, by most means, a really weird movie that people can find value in for being really weird. This is the kind of mindset I eventually took with this film. Surprisingly, it made me enjoy it much more.

However, the best parts of this film are actually the beginning sequences, where one is situated in the real world and Mario and Luigi have to deal with real problems and inconveniences. It feels like they have actual weight to their environment and they’re relatable for me, someone in his twenties, to understand their search for dwindling job offers. Once they get to the part that is actually supposed to be the hook of the film, it became boring to me. Nothing made sense and it all felt too alien/unexplained for me to take anything seriously; and hey, they’re gonna save the day, anyway.

What is probably the weirdest part to me about not just this film, but the direction this film took with its story is what age group Super Mario Bros. seems to be trying to appeal to: adults. There are numerous amounts of scantily-clad women in this film (there’s even a scene involving a sleazy night club!). Mario and Luigi are complaining about jobs and big businesses and sports teams. One character gets disintegrated into a skeleton near the end. The CGI effects can be borderline traumatic. The amount of (likely intentional) cleavage shots this film has is strangely high. In 1993, was the studio behind this film under the impression that kids didn’t play video games? I’d be more inclined to believe that, in 1993, kids were a majority of those playing video games. Were they trying to appeal to the niche of adult video game enthusiasts? It’s so bizarre to consider.

Bob Hoskins is a treat. He was by far the most entertaining quality of this film in his performance as Mario. He was borderline stereotypical he was so great, and his down-to-Earth nature made him immediately likable. Anytime he was onscreen, especially early on, I was amused. They could’ve just made a film starring Bob Hoskins as Mario going around doing plumbing jobs and I’d probably go see it. John Leguizamo, under the guise that this is an original work, was fine in his role as Luigi, though I think they wrote him a little too closely to the young up-and-comer type that matures slowly throughout the adventure. Outside the guise, he’s horribly miscast. He doesn’t even have a mustache! Everyone else ranged from serviceable to bad, with the LVP going to Samantha Mathis as Princess Daisy. She was just… blah normally and hard to swallow otherwise.

The appeal to this film, if any, is simply sating curiosity. Video game fanatics see this as a mockery to the franchise and I can understand why. Numerous errors and liberties were taken to fit into a really strange film synopsis that, apparently, was a nightmare during production. Despite this, some consider this a phenomenal experience, and completely avoiding the pitfall of “How accurate is this to the game franchise?” (a hard sell), I’ve seen worse. It’s just zany enough to provide some base entertainment, and Bob Hoskins is great in the lead(?) role. It’s considered a terrible movie, but I’d be more accepting of calling it “Disappointing.” It didn’t meet the expectations of those who obsess over Super Mario Bros., though maybe that shouldn’t be the only perspective one should have. After all, it’s kind of bad in all sorts of other aspects!