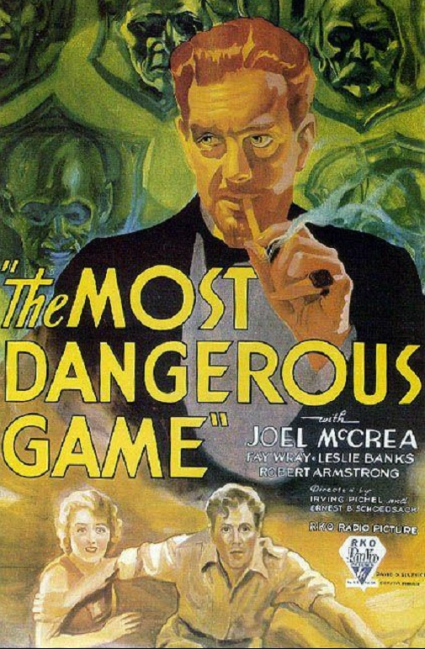 The cover image for this film is super cool and intimidating. Everything else is pretty old, and I mean that in the worst way.

I said before (earlier this month) that I had a bad habit of not taking older films seriously because many of them felt like jokes compared to the importance that film presents in the current era. This is a very good example of such, as there are plenty of things about The Most Dangerous Game that make me think it was a joke.

Before that, has anyone read the source story? I have—many years ago when I was starting off in high school. If one browses through the comment section of the Youtube video pertaining to this film (to be provided near the end), they’ll see a lot of “haha wow I read this in high school haha like my comment if you did too.” I didn’t like the comment, but I was among those who read the story in high school. While I wasn’t super fond of it, there was a definite charm to the prospect of human hunting and the questions it raised about hunting in general.

I vastly prefer what I remember of the story to the film, because this film is really cheesy, on top of incorporating random elements that don’t add to the story at all.

The actors in this film are atrocious. So many different lines that feel like they came out of the mouth of some random person the studio took out of a grocery store.

The scope of the film is really small. Such a straightforward progress of introducing the characters and then ramping up the tension to the inevitable reveal and hunt. The entire hunt only takes up about twenty minutes (the film is an hour). It all feels so cheap and lifeless.

Then there’s the decision to add some female cohort because, uh, sexism? She serves zero purpose and adds nothing. She was likely thrown in because they felt it would be more appealing. Yeah, a man saving a woman, neither of whom are at all interesting or have any chemistry, is super fascinating.

I don’t even have anything else to add. It’s just a dumb, old film. That sounds very spiteful, but that’s really just the gist of it. It has little to do with the fact that they changed the story; what they changed it to has so little appeal as anything but a mindless suspense/action story. With the lovely additions of bad acting and flat characters, there’s nothing to see here.

If at all curious, though, here’s a Youtube link. It’s only an hour.