And so, the final day of the 2019 March of the Movies block comes to a close. It was a good run this year. While I certainly could’ve improved on my time management and depth of reviews, I feel I watched a lot of enjoyable and insightful films this month. To cap it all off, I decided to see something that has been collectively crowned as the greatest superhero-based film ever in the history of time. If you think this sounds exaggerative, why don’t you check its Letterboxd page real quick and get back to me. It should only take a few moments of your time.

To those who have been following along all month, I commend you. I’m sure many of these reviews felt thrown together at the last minute, as some definitely were. For this film in particular, I’d like to allude to my thoughts on The LEGO Movie, which I watched and reviewed back on the seventh (I remember because it was a bad day). Spider-Man: Into the Spider-Verse is a lot like The Lego Movie regarding how I feel about it. Brimming with enthusiasm, energy, and soul, it’s hard to give this anywhere close to a bad rating, as the dedication to even make this film happen is commendable enough. If it was complete garbage anyway, then it should be rated as such, but one could tell simply from trailers that this was going to be something special. It wasn’t hard to tell.

On a personal matter, it didn’t affect me to the level that it affected a large majority of viewers. An enjoyable time was had watching this film, though never a moment of rapture. Nothing about the film’s story gave me that same Sublime feeling that my favorite films (a la Blade Runner 2049 or Cinderella Man) gave me with the sheer magnitude of their narratives. Perhaps because it was a little more straightforward and fond of the origin-esque storyline that has become so safe these days with superhero films. There are some distinctions, and enough emphasis on the emotional aspect of being a superhero than generally, which give it a little more staying power than most films of its genre. 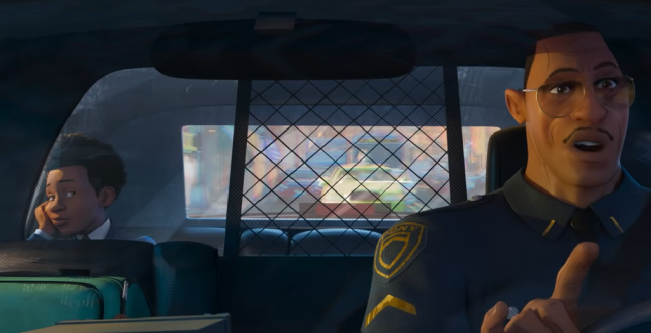 There’s another thing I’d like to talk about that may seem a little controversial, so I’ll provide a handy trigger warning for the following two paragraphs, as I want to speak upon the aspect of inclusiveness in this film and how it incorporates it.

The main character, Miles Morales, is half-black, half-Hispanic. Another integral character, Gwen Stacy, is a female superhero. Does the film make mention of this in any way? Basically, no. I’ve criticized many films in the past (particularly from Disney) for being so forthcoming about their progressive messaging and the aggressive style of its showcase. I’ve read many reviews of the recent Captain Marvel film that give me the indication that everything surrounding the central character is about how she’s female and how slimy, evil men put her down because women can’t be tough. That’s one style to incorporate, but I prefer the Into the Spider-Verse alternative, where anything progressive is only implied and assimilated into a realistic setting.

Various things here and there give some clue to the socially-progressive nature of the film. Miles’s mother speaking random bits of Spanish here and there to accentuate her culture, having the film focus on a darker-skinned youth in Miles Morales rather than the white Peter Parker, and individual scenes that may allude to real-life anxieties that may not be familiar to a white audience. What seems to matter more to this film is in capturing the spirit of humanity within Miles that is found in most people—anxiety, fear, motivation, and the ability to empathize and struggle through adversity. It’s a deeply universal approach to the psychology of a teenager in a normal life, and the way they made very little attempt to showboat its more inclusive tendencies is what I personally feel gives more strength to the very act of inclusion.

What may be the most celebrated feature of Into the Spider-Verse lies in the animation, which is often affectionately referred to as “trippy as hell.” I didn’t think it was too trippy, really, more just colorful and chaotic without feeling too obnoxious. It’s another great quality it shares with The LEGO Movie; its vividness gives it a unique coat of immersion that’s appealing if only for its quirkiness. A lovely blend of 2D and 3D, bringing to life a collection of worlds that can only be truly expressed through animation. It isn’t always seamless, especially during more lax situations, but it sure kicked it into high-gear whenever an action scene took place.

How humorous it is with superhero films that action ends up not being very prevalent throughout the course of the story. For Spider-Verse, a lot more of the content focused on the development as Miles as his dimension’s Spider-Man, as well as his relation to his family and the mounting pressure that he constantly faces. In this regard, I felt very empathetic of him, as the constant white noise that has become a part of the United States’ ultra-competitive atmosphere is something that I, too, have grown discontented with in recent years. I feel many who deal with anxiety and the issue of deflating self-worth can get a lot out of this film. Miles is a phenomenal lead character, and many others are just as adequate, if not at the very least passable.

This was a good film to end the month on. I didn’t quite find myself as amazed with it as everyone else—perhaps everyone’s hype ruined my sky-high expectations? What it manages to say over the course of two hours is both like and unlike many superhero films before it. Heart is what drives a hero, and the spirit of justice and empathy is only a fraction of what we, as people, face as a species. Superheroes are not exempt from these anxieties, and Miles shows what a modern superhero origin story could look like in capable hands. At the end of the day, however, it’s still simply a high-end superhero origin story, just as straightforward and simple as the rest of them. It’s the little things that give Into the Spider-Verse a huge edge over its peers, those including its unique art style, subtle emphasis on inclusion, and the embodiment of the human experience in as natural a way as I’ve seen from a superhero film in some time. It’s a winner, and I’m glad it’s as beloved as it is. More superhero films like this  would make me less tired of superheroes in general.