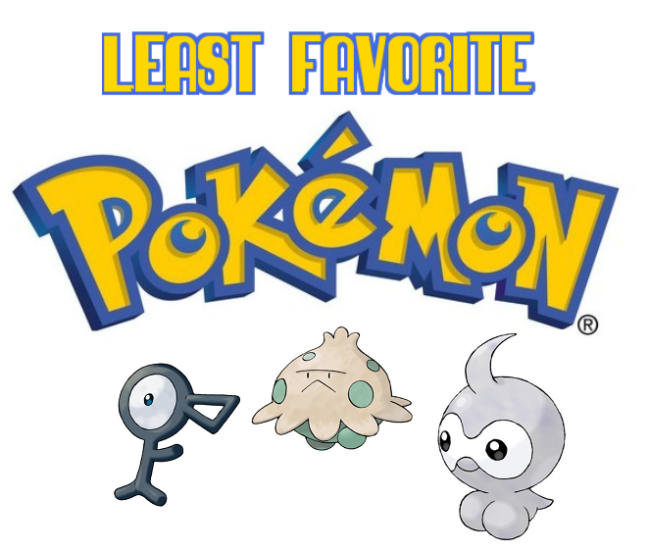 Ah, memories. I remember quite fondly the days when I would spend hours everyday on Pokémon Ruby in my youth. Even Pokémon games that I would eventually come to find quite uneven (fourth gen and onward) provide a warm feeling of nostalgia when I peek at gameplay footage anywhere around the internet. A few years ago for my blog’s three-year anniversary, I looked at my favorite Pokémon ever (which is slightly outdated; for example, Dunsparce is now my favorite Pokémon). Today, we will strike the balance between light and dark by looking at my least favorite pokémon ever… but not before a few disclaimers.

While a title of “least favorite” can imply that those listed are things that an author outright despises, there aren’t actually a lot of pokémon I outright loathe. A lot of the pokémon that will be listed here are simply pokémon that I don’t really care for design-wise, find useless for my style of party, or were often annoying to come across during my numerous journeys (Spoiler: Zubats are not on this list). Please keep in mind that if certain pokémon end up on this list, it doesn’t mean I hate them or even dislike them. Only that I like them a lot less than I like many others.

Also, this list will exclude seventh-gen pokémon because, to this day, I have not played any seventh-gen Pokémon game. They simply didn’t appeal to me. That said, let’s start off the list with a doozy.

Here’s a funny (and humbling) experience: One day, popular Pokétuber Tama Hero tweeted to her followers asking if the pokémon Ferrothorn had a large fanbase. After finding out it did, she responded to it by asking about Basculin. I replied to this tweet and put out the question: What about Trubbish? What followed was a flurry (for a loner like me) of responses defending the design and worth of Trubbish. I thought it was pretty amusing.

It didn’t really change my mind, but it made me aware that even little piles of trash have fans out there. To me, though, it’s just garbage. Literally just garbage with a face. 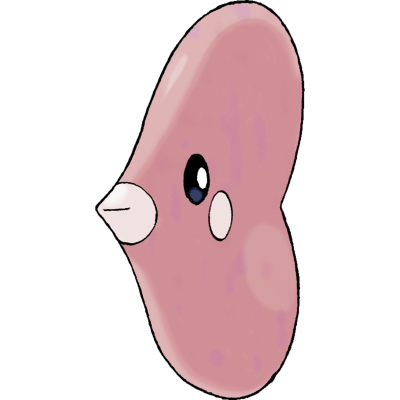 I think this might be a bit of an unpopular opinion, but I always thought Luvdisc looked really bland, even though the premise of what its supposed to be isn’t.

It’s likely based off of the discus fish, and they shaped it to look like a heart, making it a little cutie in the process. It’s cute, I’ll give it that, but it always come off as a side project, if that makes sense. Like, say, if someone had a clever idea and then went with the bare minimum to make it happen. Luvdisc almost feels like DLC to the actual content of a AAA game. It feels very… uneventful to me.

Whatever Luvdisc excels at stat-wise, it doesn’t really pop out to me design-wise. Almost as simple as Voltorb or Electrode, which are literally just balls with eyes, except it doesn’t retain the same basic charm. For me, Luvdisc is simply a very forgettable pokémon. 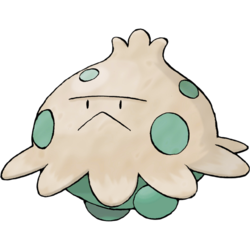 Design aside, which I also don’t find all that great, Shroomish are just really annoying for one reason: their ability.

If one makes physical contact with a Shroomish when they have the Effect Spore ability, there’s a chance your pokémon will fall asleep, be paralyzed, or be poisoned. When going through Pokémons Ruby, Sapphire, or Emerald, Shroomish are among the first pokémon one encounters, and are among the pokémon available to enemy trainers. When pokémon are young and don’t have many moves, physical attacks (such as Tackle or Quick Attack) are the only option for damage, which spurs that irritating ability. Constantly lessening the quantity of my status-healing items and berries was a very annoying part of the start of those games, and I have Shroomish to thank for it.

This sole reason made me sneer at the very premise of the little plant… thing. If one ends up being a nuisance for the experience had in the game, they’re not likely to be held in high regard in general.

This little thing makes the list based on a number of little reasons, rather than one large one.

First of all, I never really found the ability to change forms based on the weather all that interesting. Some of this is due to laziness, as I never incorporate weather-altering moves into my pokémons’ movesets. Otherwise, I just think it’s a lackluster way to shoehorn in the effects of weather-altering moves, which were introduced in generation three.

To build onto the negatives, I find the method of obtaining Castform pretty anticlimactic, as well. After saving some scientists from Team Magma/Aqua about 60% into the game, one of them just gives it to you. No build-up, no mention of what it is or what its significance is. It’s just a random pokémon not found anywhere else that some guy just gives you. Alright. This is similar to how the guy in the Silph Co. building in the first-gen games gives the player a Lapras, but Lapras are actually cool and strong, so I appreciate that far more. With Castform, it almost feels like someone handing me some unwanted fluff.

Unown is an example of wasted potential. And totally incompetent battle option.

I like the ruins that inhabit Unown. I like the slightly creepy vibe the Ruins of Alph give off when traveling around it in Silver and Gold. I like the little puzzle games it requires you to do to make the Unown appear. The Unown itself are another thing entirely.

They were pretty cool in Pokémon 3: The Movie. In-game, though, they’re kind of bad. All they know for an attack is Hidden Power, which changes based on a variety of factors to a specific Unown and the type of pokémon they face. In my experience, it’s awful… and I’ve tried! I remember long ago, playing along on my Silver file, messing around, thinking to myself, “Hey, let’s level an Unown for no reason!” It was painful, excruciating, and tedious. They’re awful in battle, and having only one possible move is a huge chore.

Oh, man, they look like the letters in the English alphabet! They spell out words in a cave! That’s rad! Do they have any significance at all in the story? No. Oh. That’s kinda disappointing. The game makes them cool. They, themselves, do not. 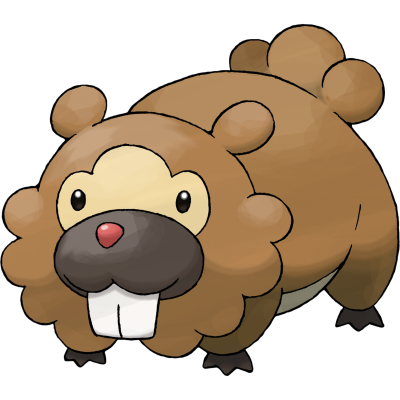 Poor Bidoof. No one really likes you. You’re the butt of every joke. Some goofy-lookin’ motherfucker who just wants to be happy.

I’m one of those naysayers, too. Bidoof just looks every flavor of bland, forgettable, and unromantic. It’s a dorky little thing that could only pass for its dumb charm. It doesn’t work on me. Seeing as this is one of first pokémon one encounters in the fourth generation, I encountered this pokémon a lot, and it got pretty annoying. One encounter, however, I will never forget.

I was using the Wonder Trade feature available in the sixth-generation of pokémon, where one sends their own pokémon and randomly trades with anyone in the world for an unknown pokémon. It’s like a lottery, except everyone controls it by putting in a variety of pokémon for people to choose from. Most are dumb pokémon that anyone could catch in their backyard, but occasionally, a really cool pokémon could appear. On one occasion, I get this precious little Bidoof with its dumb face, and its nickname, given to it by its owner, is “I’m Sorry.” I lol’d pretty hard.

To be frank, there are a lot of pokémon I could put here instead of Probopass. Probopass gets the spot simply for being the dumbest-looking one, but I could’ve put a large number of fourth-gen evolutions of previous-gen pokémon in this very spot, such as Lickilicky, Magnezone, or Tangrowth, because they’re all stupid. I stated before I don’t outright loathe a lot of pokémon, but I do outright loathe the fourth-gen’s strange fascination with randomly adding new evolutions to already-established pokémon. There were so many, too! It reeks of laziness.

Probopass, specifically, gets the spot because, excuse me, but what the fuck am I looking at right now? Is that nose hair? What is that? What the hell is this? I can’t make sense of anything here. Why does it float? Why are the eyes so cute? Why does it look like it wants to whip it? Just… confusion. So unbelievably dumb to me.

Some pokémon designs are just really odd. Many point to the first generation for a lot of their lazy designs—rats, birds, balls, puddles of slime, crabs, and so forth. All across the pokémon world, the species come in all shapes and forms. Klefki takes the form of a keyring with lots of keys on it. Keys. Keys. Keys. 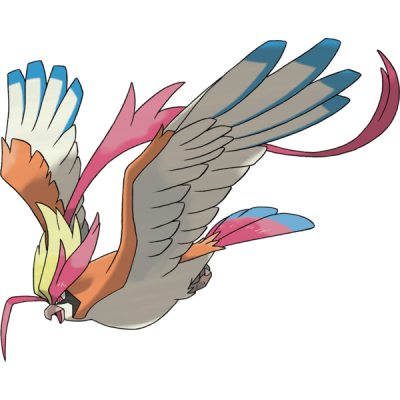 This is kind of cheating, I’m aware. One thing I need to make absolutely clear, however, is that I hate mega evolutions. I hate that they exist and I hate that current Pokémon games keep pushing it into the narrative of every game. If you don’t have mega evolutions, you’re missing out! Go ahead, kids, make your pokémon even stronger! Feel like a bad***! Look at these cool transformation animations! Whoooooa! Your Pidgeot now looks even bigger and badder than ever before! Oh, my ***! So cool, dude!

On a similar vein as all those fourth-gen evolutions making random evolutions for previous-gen pokémon, mega evolutions are a way of flipping the bird to those who like pokémon such as Alakazam, Gengar, Pidgeot, Gyarados, Lucario, and so on. Those pokémon? They’re cool, but they could be stronger, they could be cooler! We’re gonna make it so that if any of these applicable pokémon aren’t mega-evolved, the player will have a lingering thought of “I’m not using this thing’s max potential!” Hahaha! Perfectionists and OCD people, watch out! They’re never going away!

Have I mentioned I don’t like the direction that Pokémon as a series is going in? 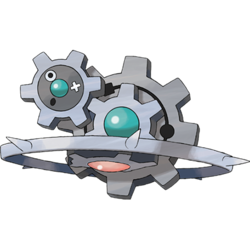 Here it is! The laziest pokémon design ever in my opinion! Gears! Gears! If that wasn’t bad enough, its pre-evolved forms are literally just two gears evolving into one of the gears becoming bigger, which evolves into this: the same bigger gear/smaller gear combo with a ring around it! Muuuuuuuuuuah! Masterpiece! Pay me three-hundred million dollars, as I am the lead designer who thinks up the most creative things such as this!

I can only shrug, speechless. I don’t even know what to say about it aside from… IT’S JUST GEARS WITH A RING AROUND IT! There’s nothing special or unique about it at all! Even the names are stupid: Klink, Klang, Klinklang. Wow. Amazing. Stupendous. Full applause, everyone. FULL. APPLAUSE.

Look, I don’t generally like being so condescending towards Pokémon, because it’s a great series with a lot of great pokémon designs. I’d hazard a guess and say I like about 80% of the entire 48538549739875 pokémon out there. This… I almost have to. What in the world is this? Tomorrow I’m gonna find out that it was commissioned by a young fan that the Pokémon team decided to include just to be nice and I’m gonna feel like a giant asshole… but until then, this is really, really, really, really, really dumb and I hate it. My least favorite pokémon ever.

What do you think of the pokémon I put on this list? What are some pokémon you don’t care for?

For more Top 10’s concerning this medium, feel free to check out the associated archive!