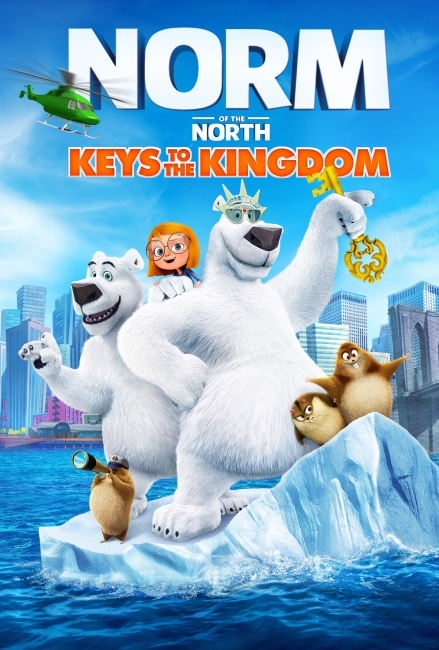 I watched Norm of the North with my brother early last month, perfectly aware of the reputation it has as one of the worst animated films in the existence of time (that’s the magic, really). While it was definitely very bad, I didn’t find it to be as bad as everyone else seemed to think it was; merely an inadequate picture with really unfunny jokes and a juvenile storyline. Upon finishing it, I made the horrifying discovery that a sequel actually existed, and thus, the search for “terribad” content continued forward.

And by the power vested in me as a purveyor of terribad content, Norm of the North: Keys to the Kingdom is an exquisite masterpiece.

People say the original film is bad, and I agree, but Keys to the Kingdom is not only worse, it’s substantially worse. The animation is horrendous, the overall design feels really lazy, people’s lips do not sync up very well to the dialogue, illogical things happen at regular intervals, an anthropomorphic bunny with a stereotypical Chinese attire is the head of New York City’s official bank of Chinatown, robots play hockey against arctic animals, and the film is literally two mini-movies mashed together into one. I will argue to this day that Norm of the North isn’t even in the conversation for worst films of all time, as it, at the very least, has a structured narrative foundation, “develops” characters, and doesn’t have any glaring problems outside of taste in humor and perhaps animation. Keys to the Kingdom basically makes everything worse—in some cases, much worse.

There are two characters in this film that return from the previous film. Their names are not important (I definitely did not forget them), though they’re present because they serve as the human bridge between Norm and the humans around New York City (the only city in America that exists). My reason for bringing them up is in their hair. Their hair, when moving, looks kind of like this. Their hair, at complete random, changes from light orange to reddish-orange to a deep red that looks slightly like uncooked meat. Their skin, along with others human characters’ skin, are lighted in a way where everything feels like a base color with zero attempt at shading or realistic coloring.

For example, let me show you an image:

Can you see everything that’s wrong with this particular shot? Look at the human character here (one of two I mentioned above). Why is her skin so red? Why does it look like she’s blushing harder than an anime protagonist surrounded by nudists? Why does her hair look like it was painted in a completely different program than the rest of her body? Why is the shot so low? Why is it not focusing specifically on Norm, who’s struggling to fit through the door (which is the “joke” of this scene)? This is such a horrid shot that to even consider that this film is chock-full of shots like this is unfathomable to me, but I sat through it and learned.

What I learned is the absolute bare minimum that an animation studio will go through in order to save budget, time, and effort. I noted the times when a character would simply have the focus drawn away from them—despite them speaking—so that the animators wouldn’t have to animate their mouths. I noted how a helicopter carrying the mayor of New York City was as play-doh-colored on the inside as it was on the outside. I noted when Norm’s children used their father’s smartphone (because he has one for some reason) to project a feed for the animals back in the arctic to watch his time in New York City with, despite the numerous complications involved with that. Wherever the animators found time to skim over details, they did. Maybe they were surprised that the film clocked in at 44 minutes by the end of what’s implied with the film’s synopsis. So, wanting to fill out an adequate runtime, they just made an entire other movie.

Okay, so I just looked it up and it turns out that this isn’t technically a direct-to-DVD sequel, as Lionsgate decided to give it a limited theatrical run at “the last minute.” Therefore, they had to make an almost totally unrelated second portion to stretch the screentime accordingly. Congratulations, Lionsgate. You made a film worse because you wanted a little more money. Also, thank you, because this film was simultaneously made more marvelous.

“Norm and his oldest son travel back to New York to receive the key to the city.”

Based on this, what do you think the movie would consist of? Literally anything? I thought similarly. With something so abundantly vague, the film could take the plot in any which direction it wanted. Perhaps Norm will encounter the antagonist from the first film again? Maybe his son enjoys the energy of the city and refuses to return to the arctic with his father? I was shocked to find out that they decided to do basically nothing with it, instead opting to have him accept the key to the city within the first twenty-five minutes of the film. Everything that follows isn’t described within the synopsis, perhaps because it plays out so randomly that the producers had no idea how to sell it. “Norm and his oldest son travel back to New York to receive the key to the city… and then crazy shit happens.”

And yet, despite everything, Keys to the Kingdom unleashes a quality that the original film wishes it had. Enjoyable on a scale that makes the original film dreadfully dull by comparison, the level of laziness by the animators, specifically, makes a joyful search of inadequacies part of the experience. How far will they go to mask how obviously terrible this sequel is? My brother and I, who watched this together, developed as critics after one viewing. We analyzed the shot composition, the logic of its plot structure, the effectiveness of its character development, and the motivations driving these characters. Constantly gauging the credibility of the events on display, giving up by minute number seven. What this film does especially well is defying the expectations of those who watch it, diving deeper than one could imagine possible for something that actually got a limited theater release. Y’know those random Christian direct-to-VHS films that ripped off the 3D animation style of Veggietales? They’re better quality than this… almost twenty years prior.

Please watch this film. Even if the aspect of terribad isn’t for you, the scientific opportunity on display for any aspiring film critic cannot be ignored. Norm of the North: Keys to the Kingdom is exactly as its name implies: a key to a kingdom… of ruthlessly shitty quality. Whether Norm and his son are traveling to New York City or challenging members of a fictional land (Russia) to a hockey match for the right to the arctic’s ice, what occurs within the span of ninety-one minutes is an experience of ineptitude the likes I’ve rarely seen. It’s astounding, it’s incredible. I loved it as much as I pitied it. And I will likely watch it many times as a joke, always finding new things to laugh at together with my family.

The rating for this film and all others can be found at Letterboxd.

For more reviews (and review-esques) on this topic, check out the archive of film reviews!