I could name this post “Updated Thoughts” just because this is the third time I’ve seen this series, yet I don’t have any formal post on it anywhere on this blogsite. Lord knows I’ve referenced it enough times, regardless.

It would be easy to go talk through this post with nothing but overwhelming praise. This is, after all, my favorite anime of all time—confirmed after re-watching it for the second time. An essence of connection has continuously led me to come back to it when my mind is in need of stability. So much here speaks to me on a personal level like few other anime do, down to its most subtle aspects. However, I think I’ll start with why I think Katanagatari wouldn’t be palatable for oncoming viewers.

If, for example, someone is just stepping foot into the anime medium, this is not what one should start off with. One of the qualities to Nisio Isin’s writing is that he is very satirical and abrupt, constantly messing with the flow of his pace and the importance of various situations. To have a complete newbie watch this could give a false representation of what anime is, full of overtalkative, plot-manipulative stories. And what appreciation could they have for the satirical elements if they have no knowledge of what’s being parodied?

I first watched this in late 2012, a few months after I got into anime. At that time, I took everything in a straightforward manner, which the aspect of parody completely absolved of mind. The cheeky jokes, the subverting of expectations, the fourth-wall breaks; I was too enamored by the more serious aspects that I unconsciously ignored them. It wasn’t until my second watch, in late 2014 when I had two-plus years of anime viewed, that I came to realize all the satirical elements of Isin’s writing. And seeing it again in 2019, I was aware of so much more. Definitely not a series to watch in the larval stage of one’s anime-viewing “career.”

Ignore the bold, big letters forming a word above for one second and listen to this collection of assembled letters. The design of this series is wonderful. I cannot stress enough how much I absolutely adore how this anime looks. What I mean by animation is the fluidity of the movements and the efforts made to make things as realistic as possible, which can be shoddy. One Punch Man (season one), this is not. At many points during the series, the studio takes great heart in using slow, panning shots of people talking during certain segments where characters stand around and talk. Hell, there are times when the characters aren’t even onscreen and the camera pans to the sky or something and sits there as they talk for up to ten seconds.

When the animation calls for it, the effort is serviceable typically, pretty sometimes. I didn’t realize it until my third watch that the animation for this series can be pretty lackluster, and many shortcuts were taken to ensure that it all looked finished up in time for release. Whether it’s people sitting and talking, standing and talking, or gloating through advantageous monologues, one should expect a lot of talking. With this talking, a noticeable lack of effort to animate much of anything.

This is a quality that has often been associated with Nisio Isin—not just here, but with his other works, as well. Whether Katanagatari, the Monogatari series, Medaka Box, or otherwise, Isin likes to write outside the box. For this, he faces the label of pretentiousness for trying his absolute hardest to be different and oh-so deep. The writing in Katanagatari often hinges upon this quality, constantly asking things such as “Why do you fight?” and “How far will you go to achieve your ambitions?” Episode ten, specifically, is like a battleground of these philosophical conundrums.

The way Isin frames his work, one could definitely make the argument that he doesn’t take his story seriously enough. In between mocking the way traditional stories go, implementing random sexual fan service, and switching from deathly serious to comically non-serious on the fly, his writing could ruffle some feathers. For those who like when the tone of a narrative stays within a relative range of seriousness, this won’t be for you. While the series has a penchant for flipping back and forth, certain episodes have as much of a tone for themselves as the series does as a whole. Episode ten is pretty serious, but episode nine—the very episode that precedes it—is undeniably goofy.

That said, everything else about it is perfect and you should watch it right now, should you fit within the qualifications I elaborated on above.

Hyperbole aside, it’s a special kind of feeling to know that while watching the series you used to adore, it will remain as poignantly emotional and sacred no matter how often it’s viewed. This, unfortunately, wore off with Toradora!, which used to be my sworn “FAF” (Favorite Anime Forever). For Katanagatari, it’s still as robust as ever, so I’ll be sure to hold on to this feeling for as long as I can. And like with Toradora!, the feeling of “I love this” didn’t come immediately with Katanagatari—it took some episodes to develop. Like with the relationship between Togame and Shichika, I didn’t realize it was changing, and yet the results were inevitable.

Togame and Shichika Are the Best Example of an Actual Couple

This might be satirical; one could make the argument for it (I certainly could). Everyone familiar with anime knows that men and women are afraid to touch. Holding hands is a big fucking deal™ in anime. Togame and Shichika, the male and female lead in Katanagatari, not only touch, but they are constantly touching, as early as episode two. At one point, it’s shown that they sleep together in the same bed. Not just once, either—the anime makes absolutely sure to remind you at almost every turn that these two sleep together, hold one another often, and make physical contact again and again and again. That’s pretty bold.

Not only bold, it’s kind of brilliant. What better way to gauge the development of trust and human connection than through increased physical contact. Shichika essentially starts as a hunk of wood, the personality of one trained in martial arts and nothing else. Throughout the journey, Togame slowly brings out the humanity within him, and the level of trust between them is apparent and obvious, something one can’t say for 99% of other anime couples. While for some, it takes a whole cour of episodes to even establish a relationship. For Togame and Shichika, they start from episode one (through unconditional methods, but regardless). And from that point, they grow closer which each passing episode. It’s utter joy to follow.

God, I adore how this anime looks. The effort in making a huge cast of characters look unique and interesting, all while painting their quirks and personalities upon their physical description, is a sight to behold. Some are literally just wearing bug suits and they still look great. Everyone’s eyes are so different and complex, borderline undecipherable. And the color! Oh, how this series wonderfully incorporates color into every scene, every character, and every new land visited. Such a vibrant, interesting-looking series. 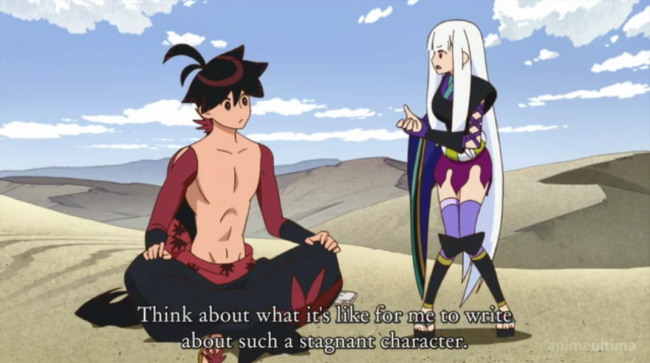 It almost feels like an embarrassment of riches, as the excess of colors (especially for characters) can almost be distracting. The twelve heads of the Maniwa Corps, a ninja clan, are all dressed in such extravagant colors (likely satirical, but nevertheless), which should inhibit their sneakiness. One can absolutely tell who a major character is and who isn’t, almost like those screenshots with a classroom and one character has pink hair compared to everyone else’s black and brown. Perhaps it could be overwhelming to some, but I am a closet fashionista and I adore every effort to make things as colorful and vibrant as possible. The over-the-topness is awesome.

I Just Think the Writing is Cool, Okay?

Pretentiousness or not, I love Nisio Isin, because he actually tries. Convoluted, self-defeating, self-aware, or whatever else; one at least knows they’re in for something more than the formula-heavy garbage that has taken over the anime medium in recent years. No matter the criticism for not taking his stories seriously, I think he takes his stories seriously. Abrupt tonal shifts are part of the flavor; subverting expectations is charming; wanting to do more for your story through experimentation is something I will always praise. Katanagatari is a memorable, exciting, and deeply impactful journey, and I can guarantee that, regardless of like or dislike, it will not leave one with nothing.

By the end, I deeply sympathized with Shichika and Togame (and both are now on my favorite characters list; it used to only be Togame). I liked the characters of Princess Hitei, Enzaemon, Houou, and the myriad of people that Shichika and Togame came across on their journey. Despite everything that could be criticized about the writing, it held true to the characters in the series, its main selling point. You don’t incorporate a lot of talking if your characters are boring. One character talks in reverse because why not? (He dies three minutes after he’s introduced.) I will likely never forget the names Togame and Shichika, and I think that’s all that matters in the end. I love them.

If my writing on the series hasn’t scared you off, I implore you to give it a try. With character intrigue, creative flare, and enough pretentiousness to divide a whole community, Katanagatari is as deserving of the title of “Art” as I can think of within the anime medium. It won’t be for everyone, but for those it speaks to, it grabs them by the skull—its grip harsher than steel—and slams them straight into the crust of the earth. At which point, the assaulted gets up and pleads, “Please, sir, can I have some more?”