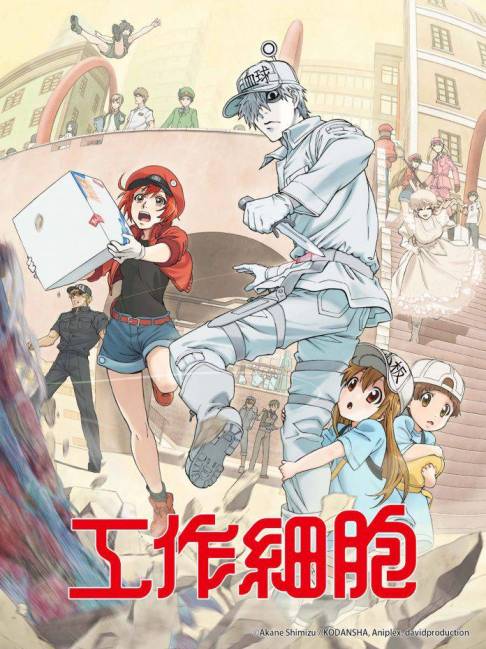 Remember when The Visualist’s Veranda was an anime-themed blog? Me too. Good times.

Let’s take a little aside trip real quick: I wanted to write this post a couple days ago, closer to the time I actually finished the series. However, I decided on a whim that I wanted to dedicate all hours of my time to the latest Tetris 99 Maximus Cup, so I held off on writing it. As such, a lot of the creative moisture in writing this post went away, so please excuse my writing if it sounds a little drag-ish.

I started Hataraku Saibou nearly a year ago while it was airing, encouraged by the positive press around it. I even got as far as writing an Early Impressions post on it after three episodes. That was, as previously stated, almost a year ago, so hell if I remember anything I said about it then. This post will chronicle how I felt going from episodes 5-13, which is essentially what I watched since picking it back up about two weeks ago. It will also be quick because I don’t think there’s much to be said past a few integral aspects.

Hataraku Saibou is probably the most educational anime I’ve ever seen, aside from perhaps Kemono Friends. Coincidentally, both this and Kemono Friends have a bit of an all-ages appeal to them that is laced with scientific charm. From this angle, I could almost see this being shown in Japanese school systems—I wonder if teachers there would be accepting of all the bloody violence?

Such also makes the anime a bit on the boring side. While refreshing to have an anime focus on something other than wish fulfillment or tits, there are times during an episode where the action will stop multiple times to explain various information on germs, cells, or whatever else that freezes time and takes anywhere from twenty to thirty seconds to fully elaborate on. Great, now I know that red blood cells deliver oxygen to other cells in the body. I shall now watch as a moe-fied representation of the red blood cell yells and gets lost as a running gag.

On that topic, the characters of Hataraku Saibou are another hit-and-miss thing that drove the series. Red blood cells are referred to as “Red Blood Cell” or an ambiguous title such as “Senpai” or “Kouhai”; similarly for all others. At times, the anime wants to paint individual cells as specific characters that differ from the rest, but also tries to make it seem they’re just one of trillions of other cells. For me, you can’t really have it both ways like that, and it hurts the overall potential that these characters could have as individuals. Development is attempted through flashbacks and such, but at the end of the day they’re kind of regarded as another in a group.

In terms of overall story, there’s not much of a grand scheme of things a la Osmosis Jones (the obvious comparison). Many of the episodes consist of one of two scenarios: Monster (virus) of the week or character showcase. Over time, it begins to shape into something predictable and formulaic—a comforting dullness that both amuses and bores. Admittedly, the episodes focusing on characters, despite the clichés attributed to their whole, proved more interesting than much else. There was also a two-part episode involving cancer cells that was likely the high-point of the anime, combining both elements of monster of the week and character introspection. But it was also very predictable.

I suppose for the emphasis on absurdity, Hataraku Saibou is worth recommending for something a tad different. Many of the storylines and characters it produces are only vaguely developed and often borrow from other series for a set foundation. It also borrows a lot from the human body, as it encompasses the many wonderful (and perhaps horrifying) things that occur within us all. It’s a bit too general for my liking, and only offers an amusing portrayal of what Osmosis Jones did for western audiences (on a smaller scale). Still, there are some fun moments to be had and it’s better than the common title. I think the characters make it better than it has any right to be, which is nice, seeing as they help us function and all.

For more reviews like this, be sure to check out the accompanying archive.