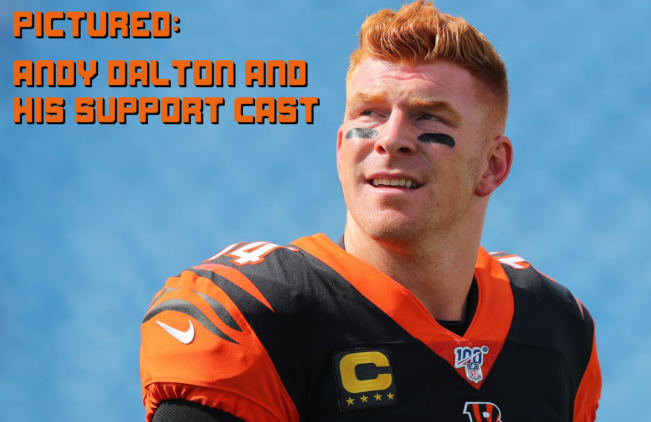 Disclaimer: This is not a post arguing that Andy Dalton, as a football player, is underrated or a bonafide starter (even if I believe he is). This is also not arguing that Andy Dalton has never gotten breaks before. The main argument presented here is that Andy Dalton deserves better. His stats aren’t pretty and his team is 0-8 in 2019. As of yesterday, on his own god damn birthday, Dalton was benched for rookie Ryan Finley. Thus, the floodgates opened about the longtime Bengal’s legacy, worth, and role in a dumpster fire year for the 2019 Cincinnati Bengals.

There are a lot of things to like and hate about Andy Dalton as a starting NFL quarterback. Here’s a list for each category:

What he has managed to accomplish in his career thus far despite the shortcomings is something to be proud of. And while I have defended Dalton on many occasions, I believe this 2019 season is one that is nowhere near his fault alone. Conversely, it may be appropriate to say it’s all his fault because he’s essentially playing alone, as his team is as stacked talent-wise as the 2019 Miami Dolphins. Plenty of things are at play, but the list is pretty easy to decipher, which I’ll do now.

What is a Weapon?

In eight games this season, there has been a single reliable target for Dalton: Tyler Boyd. A.J. Green, a historically great #1 wide receiver, has been out with injury for the entire year thus far. Boyd, as the current #1, has 51 receptions for 536 yards and a single touchdown catch. Should he keep pace, that would call for a fairly good season, besides the lack of touchdowns. Outside of him, all other targets—receivers, tight ends, or running backs—have less than 30 receptions and 400 yards. Tyler Eifert, the once-good tight end—especially in the red zone—has 23 receptions for under 200 yards and a single touchdown. John Ross, who started the year hot, is now out for the season due to injury. With Boyd as the only viable option, it makes it easier for defenders to cover him and take him out of integral opportunities for yardage.

They say a quarterback’s best friend is a good defense and running game. How is the Bengals’ running game this season? Their leading rusher, Joe Mixon, has 101 rushing attempts for 320 yards and 0 touchdowns. Giovani Bernard, the longtime dual-threat pass-catching back, has 30 attempts for 80 yards. The entire team only has three rushing touchdowns. Do you want to know who scored them? Andy Dalton. Outside of him, the team is a combined 136 attempts for 421 rushing yards and 0 touchdowns. That’s 3.1 yards per carry, and 0.0 rushing touchdowns in eight games.

The Importance of Protection

How many times has Andy Dalton gotten sacked through eight games in 2019?

If you said anything other than C, you are both wrong and not paying attention. 29 times in eight games averages out to 58 times over the course of a regular season. That is an absurd number of times to be sacked through sixteen games, and is almost four times a game. For reference, Deshaun Watson was sacked 62 times last year, which was the league-high. Dalton was heading for that point, had he started the entire year. For further reference, Dalton was sacked 21 times in eleven games in 2018. If the quarterback drops back to pass and defenders are already all over him, how does one expect him to get anything done? Deshaun Watson had DeAndre Hopkins, a great receiver, Will Fuller, a pretty good receiver, and a decent running back in Lamar Miller. Andy Dalton had Tyler Boyd and no running game.

In Defense of Defense

As I’ve watched more football in my life, I’ve begun to understand the importance of great defense. You need a defense in order to win, as many, many Super Bowls in the past have shown. The New Orleans Saints have always had a great offense under Drew Brees, but it wasn’t until recently that their defense began to step up along with it. All those years that the Saints went 7-9 was almost entirely to blame on their absolutely putrid defense. Where does the 2019 Bengals defense rank? Last.

436 yards per game they give up on average, which is the worst in the NFL. And while they aren’t the worst in points allowed per game, their 26.2 points per game average is good for tenth-worst in the league. If a team is giving up 26 points per game and expects their offense, which ranks last in rushing yards, has a terrible offensive line, and has one productive weapon, to compensate for it, that’s prime for an 0-8 record. Tom Brady probably couldn’t lead this team to a winning record under these circumstances.

Does Ownership Even Want to Win?

The NFL is a risky business, and sometimes the choices you make can destroy a team. The ownership group for the Bengals, presided over by Mike Brown, seem to have an aversion to splash free agent signings or trades. Hell, reports even indicated that they didn’t try and trade Dalton because they were “philosophically opposed to trades” (which is hilarious). With all the down years since 2016, why isn’t the idea of going out and signing actually good players something to strive for? Who is the biggest free agent that the Bengals have picked up in the last few years? John Miller? He isn’t doing too hot right now.

Consider the teams that have gone out and bagged the best talent available in free agency in recent years. The Los Angeles Rams, who snagged players like Aqib Talib and Marcus Peters (both ironically gone now) to shore up a defense, made it to the Super Bowl last year and had the franchise’s first winning record in a billion years the year prior. The Broncos picked up Demarcus Ware, Aqib Talib (again with him), and T.J. Ward to do similarly, and they won the Super Bowl the year after they initially signed. The value of these free agent signings, however short-term it may be, helps to improve the situation and further one’s chances of winning. Yes, the money constraints are scary, but would it be worth it to win? Many have shown it’s possible. For the Bengals, it seems they have no urgency at all. Do they want to win? Or do they want money?

So let’s give Andy Dalton a break for the 2019 season. He’s not the best quarterback in the NFL and didn’t perform well in a garbage situation, but why treat him like this? I understand the idea of starting a rookie: see if he fares any better and decide whether to use a high draft pick on a new quarterback of the future. Even so, I feel terrible for the circumstances surrounding this team and for Dalton, who probably lasted a lot longer than many would have given him credit for. I wish him all the best going forward and hope fans will appreciate the efforts he put forth in trying to make Cincinnati relevant again… even if he couldn’t get past the first round of the playoffs.

For more opinion pieces on this topic, be sure to check out the accompanying archive!