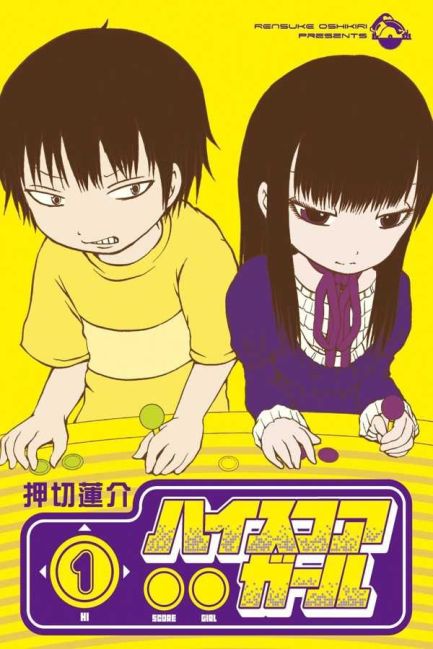 A week into 2019, I started reading a quaint little manga called Hi Score Girl (occasionally titled as High Score Girl). In truth, this was not the first time I came across this series, as I’ve been wanting to read it ever since… well, ever since running across it on MyAnimeList all the way back in 2013 or so. It wasn’t until news broke that the series was ending in 2018 that I felt re-invigorated to finally try it out. What an interesting year it’s been, going through this story (and waiting months for individual chapters to scanlate).

The anime adaptation of this work is quite popular, receiving two seasons and a few OVAs, all ranked within the top-thousand on MAL’s average ranking board. There could be a number of reasons for this—aside from the obvious “it’s just good” claim—like its incorporation of nostalgia, video games, or a “boy meets girl” premise spanning multiple years. All listed are considerable points of interest for me, being fond of each of these qualities in stories. For a while, entrance me it did, with a bratty main character that vaguely reminded me of my asexual brother. If it wasn’t for this new female threat, he’d be the best gamer™ in town.

[Warning: Some Spoilers Ahead]

While it didn’t come to mind when I began reading it, I wondered at some point whether the manga would address the stigma of being female and fond of video games. Hi Score Girl takes place in the ’90s, so it’s easy to imagine that the culture was anything but inclusive. Surprisingly (or not?), it doesn’t focus on it at all, with most only making passing comments about this insanely good player being female. I feel this is a missed opportunity, as someone who likes when stories provide a message. The mangaka decides to go for broke and keeps the focus tightened on the drama of “Will-they-won’t-they?” Fans of romance won’t mind this, though those looking for something more could feel slighted.

This is where I think Hi Score Girl disappoints most: “Something more.” When you take off the shell of its foundation in nostalgic gaming culture, it’s a “boy meets girl” story about them eventually coming together, with an edge to competition and a love triangle thrown in for kicks. All of this is continually explained in the most verbose way possible, with the main character outright stating his intentions during the latter portions of the manga. If there was an extra layer of importance provided to this story, it may not have felt so fragile on its own. Sixty-something chapters dedicated to having a dude finally admit to loving some girl he can’t beat in the medium he thrives in. That’s the point.

Hope remains in the form of characters, whom are quite decent. It would be one thing to have them all be archetypes (of which some resemble), but the writing generally gives them some development and insight. The female lead is probably the most “waifu bait” of everyone, considering she’s mute (lol ok) and is very hands-on with her temper. She’s almost like a tsundere that doesn’t yell, complete with goth loli attire. Even still, the situations she faces provide some sympathy towards her character and occasionally justifies her reclusiveness. On a similar vein, the male lead receives enormous amounts of downtime to think upon his actions, motivation, and desires. Quite dialogue-heavy, his heart is, which occasionally takes up a large volume of chapter space. The amount of time spent on attempting to bring these characters’ hearts around is commendable.

As for their interaction, I actually like the chemistry between the male lead and the eventual second female lead that falls for the male (because why not?). In some ways, I prefer this second option as a more realistic choice when compared to a goth loli mute tsundere… I won’t kid myself, she’s leagues better. While I find her motivation to improve somewhat problematic (I want him to notice me), I did enjoy her introductory chapters and the overall progression of her gaming prowess. She’s a lot more approachable of a character, due mostly to her not embodying every personality archetype possible. Her temper is similar to mute lead’s, though the motivation to improve rings more similarly to the male lead, and the underdog story tends to work in most cases. It’s only more of a shame that her importance lessens as the story comes to an end.

Probably the most intriguing (and debatable) quality to Hi Score Girl is its art style, which feels very, very frog-ish. Characters’ heads are shaped almost like characters from Animal Crossing, and their eyes mirror their nationality almost to an absurd degree. This distinctive look could alienate some, even if I thought it was a great stylistic choice. It’s not pretty, kind of like life. What I did like were all the caricatures of arcades, gaming titles, and objects from said titles. The Guile acting as a moral guidance for the male lead (aside from being way too talkative) was a neat touch and a good indication of the character’s worth to the lead. Zangief holds a similar role for mute lead, and it only makes the leads’ closeness more apparent.

With the manga not completely scanlated as of yet (five chapters or less to go), there may be some missing information towards a satisfying ending, of which I may update later on. For now, I feel Hi Score Girl is an adequate story which sails on the premise of video games as a part of one’s personality while the human drama is way too juvenile and obvious. Some character drive and the development of romantic intentions provide some emotional attachment to characters that are really dumb on the surface. I almost consider it a guilty pleasure, but there’s too much quality to it to feel bad about enjoying it. Give it a read if it suits you; just don’t expect Street Fighter II levels of greatness.

[Edit (1/16/20): Read the last few chapters to this a few weeks back and the ending was reaaaaaaaaaaally dumb, but appropriate. Doesn’t affect the score at all, but encapsulates how it began and what it would eventually become.]