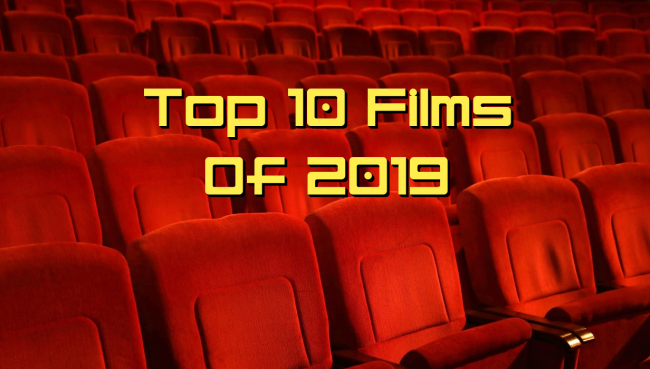 This may sound like somewhat of a cop-out, but of the ten films on this list, six of them are films I featured in my Top 20 Best Films of the Decade list, written just three days ago. As such, I will not go very in-depth with them, less than I already do with these lists, anyway. Probably a paragraph, tops. If that upsets you, go read my decade list that I was so considerate to link so that you wouldn’t even need to leave this page! Otherwise, I will leave links to my full thoughts when applicable.

According to my letterboxd profile, I viewed 102 films in 2019. Narrowing down ten and figuring out where to place everything proved somewhat difficult, especially in conjunction with the twice-aforementioned decade list. While I didn’t visit my local theater for a long stretch between March and July, I made up for it plenty with numerous visits in the last few months of the year. A pretty good year for film, I think, even if my tendency to ignore the mainstream titles makes people flinch. Now then, presenting the ten films I viewed in 2019 that I think are cool. 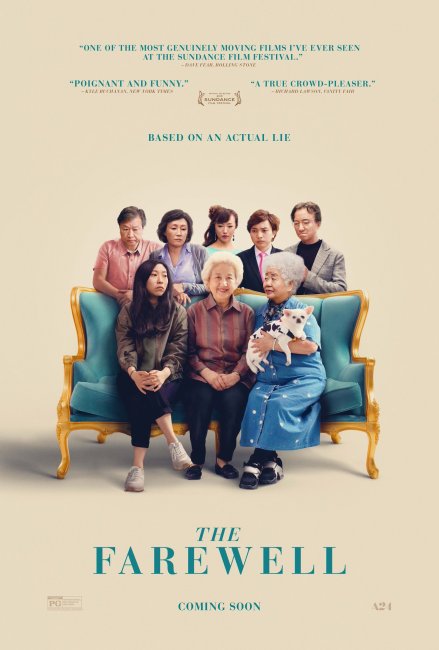 Real quick, if you look closely at this promo image and the other promo images for films to appear later on this list, you’ll notice a little “A24” on a few of them. That distributing company tends to put out a lot of high-quality films. Even after this year’s list, you may see that name on my blog a few more times… at least.

The Farewell is a film that is highly praised for being authentic and spectacularly-performed. I also came across a review that had praised the writer/director, Lulu Wang, for the effort in making character dialogue feel both realistic and entertaining. It cannot be overstated how true these two statements are, and on top of that, many within close-knit family situations will be able to empathize with the message being portrayed here.

Is it sometimes better to let things be unsaid for the sake of family togetherness? I certainly don’t let my mostly-Conservative-Christian family members be aware that I agree with basically nothing they do. Wouldn’t it be better for me to just tell them and get it over with? That’s tricky, and for that foundation of family—for better or worse—to be upheld, one must be prepared for sacrifice. All the unwinding torture that comes along with this family’s situation bring to life the difference in cultures of people and how there is no universal “right” to any situation. Gripped me by the heart and the brain, something more films should strive to do. 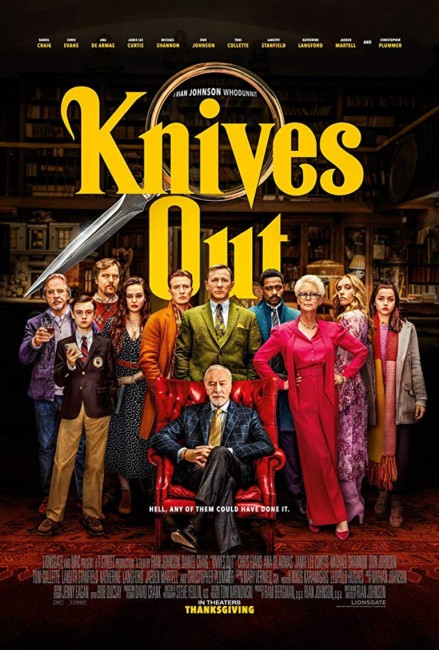 I’d like to take this time to point out that I actually liked The Last Jedi because it tried to do something. It wasn’t a great film (and hardly a good one), but the commitment to actually telling an emotional story and hurling a giant middle-finger to longtime fans was hilarious. Nothing else about it was hilarious, just that. Anyway, that film was directed by Rian Johnson. Knives Out is also directed by Rian Johnson, and it was pretty good.

Many call this film “fun,” but only those willing to look deeper will understand that Johnson really enjoys hurling middle-fingers at people. Lots of political discourse present underneath this whodunnit plot, most notably of privilege and the unending chain of power that keeps rich, white families afloat. He takes ample time to really dig into the festering zit that contains the vehement spite these privileged individuals embody when anyone threatens their power, and the apathy they feel for those they deem unfit for society. Some could see it as a bit too arrogantly heroic, others would just hurl more middle fingers.

Many call this film “fun,” and it definitely deserves the reputation. As another reviewer has since said (and I’m sure many have echoed it), Johnson seems to enjoy subverting expectations. As a mystery, this is actually a no-brainer, however the traps are set to have one question their own predictions in an effort to continue to cast everyone in an ominous mist. A little humor here and there and a lot of social commentary tucked in-between scenes, nothing would work quite as well if every actor didn’t perform to the highest of standards. Thinking back, a few characters got very little development (or screentime); of those who did, they were as great as the overall experience. 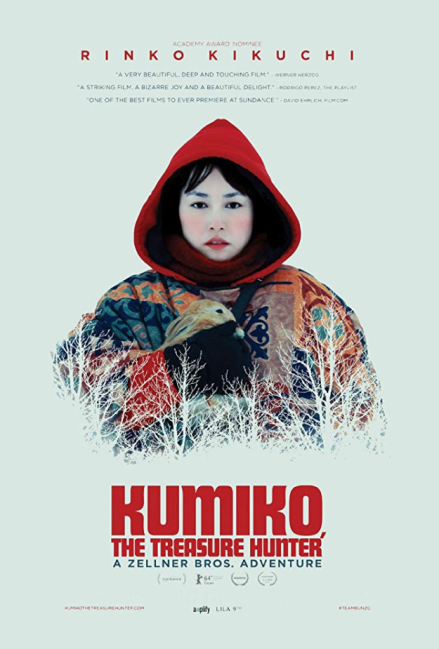 Featured on the decade list. Kumiko has a really detailed analysis on grand dreams one has in life being burrowed underneath the unchangeable malice of reality. Lonely, cold, anxious, tragic. Makes for a really good pity watch, and perhaps a desire to see things be better. Very good performances and a journey that is all but its unreachable destination.

7. Spider-Man: Into the Spider-Verse 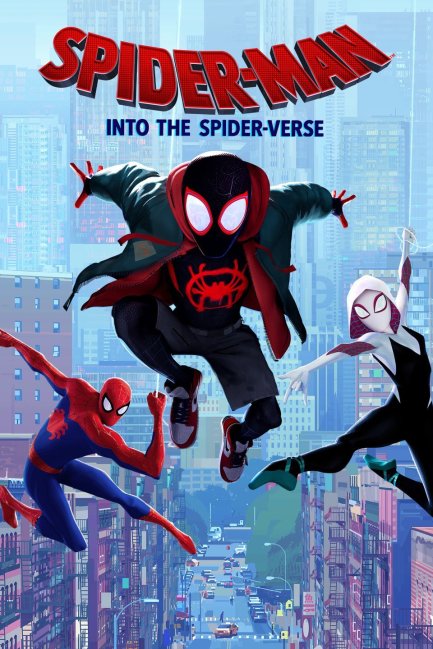 Featured on the decade list. It gets by almost solely on heart, as its story isn’t too complicated. Animation and overall presentation gives a wonderful diversity angle that makes it applicable to just about everyone, and not just a-very-specific-but-not-explicitly-applied demographic. Decently funny and a great coming-of-age story rolled into all the glamour of a superhero film. Worth the hype. 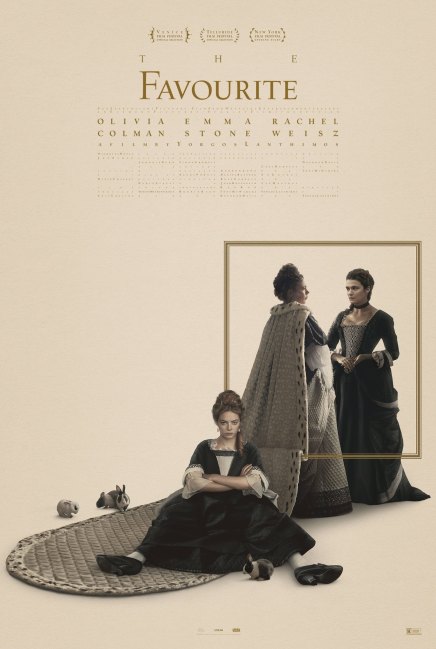 Featured on the decade list. A director known for being really abstract and interested in the human psyche, The Favourite is one of unrestrained competition in favor of empathy—power is everything. Great for a satirical viewing of the incompetence of royal ninny-nannies (is that phrase still a thing?) struggling for favor, it pits two family members for the throne in tensile fashion. Performances are amazing and the attention to detail is to die for. This should’ve won Best Picture. 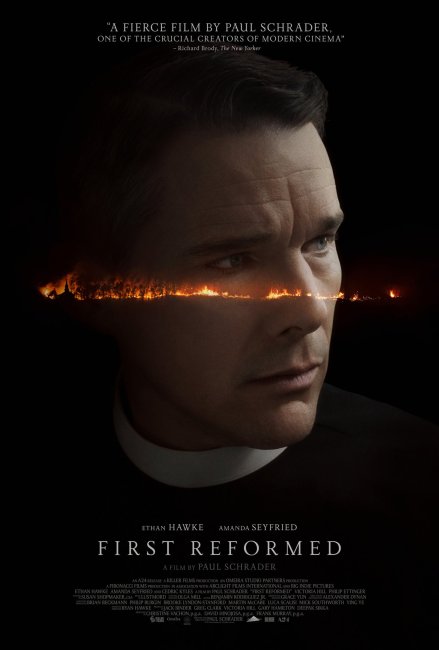 Featured in the decade list. Powerful in the sense that it takes some skin and slowly peels it until it’s bare to the bone. Gruesome, yes, but also moving in a way that had me thinking about a lot of societal conflicts. The way the film propped its message parallel to the plights of the main character allowed for some delectable theorizing. Ethan Hawke was fantastic. This film is fantastic. You could be fantastic if you watched it, or maybe not.

4. Castaway on the Moon 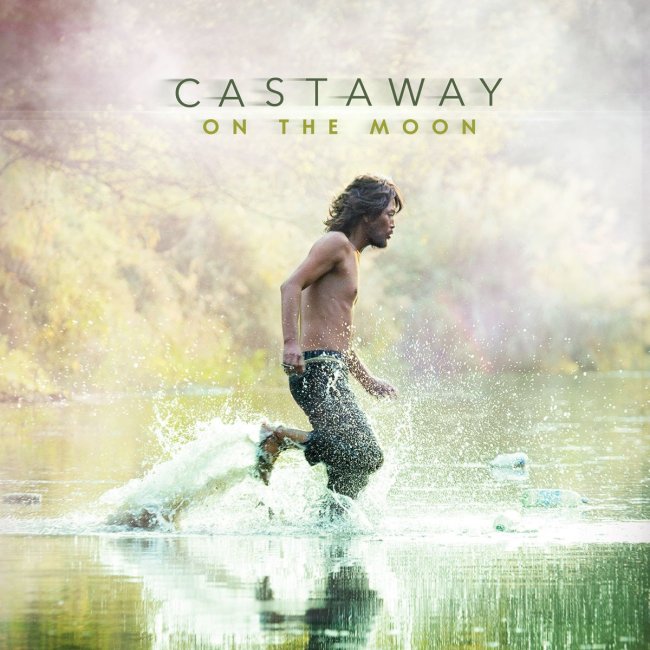 Woooooooo! A film not featured on the decade list! My writing has become unshackled!

I was scrolling through letterboxd one day, bored and fishing for a new film to watch in the meantime. Along the way, my search dabbled a little in the foreign film market, where South Korean cinema seemed to be hyped up quite a bit by the site’s community. Castaway on the Moon was among the highest-rated films that matched the criteria, and the synopsis is really bizarre. A dude, fed up with his life and planning to commit suicide, ends up trapped on an island just outside of normal civilization. He must embody the spirit of survivalism in order to make due, and perhaps start his life over from the bare essentials.

In a similar, though not same situation, a NEET girl is oddly fixated on photography and receiving praise from anonymous online users (details may be slightly inaccurate; been a while since I watched this). This is a romance story between these two individuals and the struggles they face to reinvent themselves to suit each other’s needs.

From my viewpoint, all that I just described is recommendation enough for this film, seeing how bizarre it all is. What helps tremendously is the emotional stability within it all, relatable on a number of small levels with various fronts of human nature. We take so much for granted that when we lose everything, being able to make ramen completely on our own with ingredients amassed by our own hands feels like we’ve become revolutionaries. This is but one fun thing that happens over the course of this film, surrounded by many more charming, insightful, and most of all weird shit that makes this a really good film that I hardly expected to adore this much. 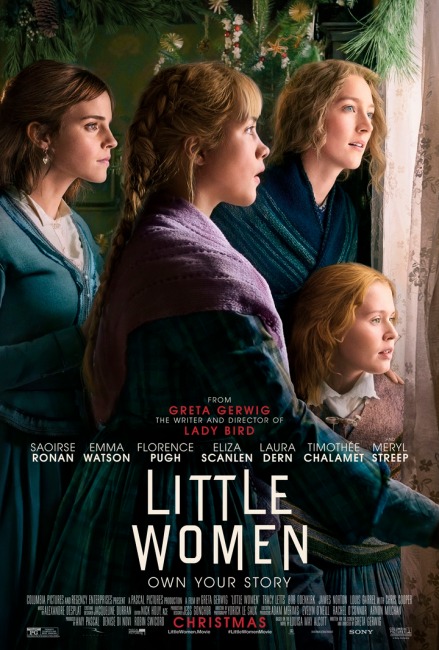 Featured on the decade list. Recency bias may play a part in it scoring this high, as I saw it last week and the emotions are still fresh. Nevertheless, Greta Gerwig has become a Brand Name™ director capable of producing masterful stories of heart and entertainment. Performances are absolutely beautiful, the lighting and framing of different character viewpoints are delightful, and it absolutely demolishes the heart. A story of love and kindness, of being with family, and remaining one with your dream. Love it, love it, love it. 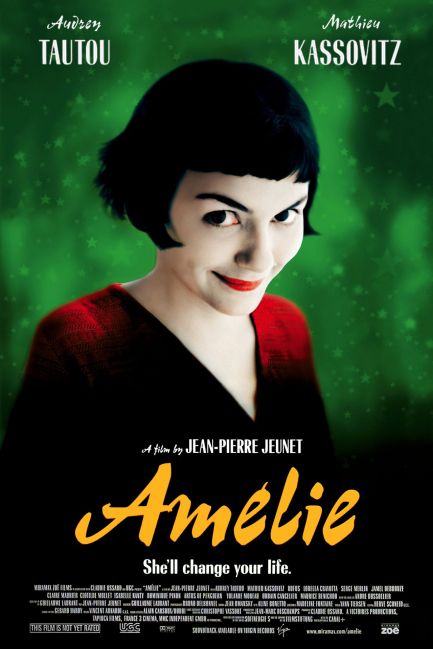 Sweetly whimsical, like a day out in the sun with your most beloved person doing your favorite activities. Playfully quirky, like running through a maze devised by your pet, who suddenly obtained immeasurable wisdom through a wizard’s cap. There’s a lot of spirited enthusiasm to living life uncontrollably personal present in Amélie that I knew I would adore it within the first ten minutes. And then they have the audacity to make me personally invested! Rude.

Amélie is a lead that succeeds in part through her innocence, painted in a sort of ignorant, youthful naivety in the eyes of her peers. Her curiosity makes her child-like, while her indulgences and past experience are immensely adult, which makes things comical in the foreground. Seeing her viewpoint from childhood to present time already gives her the advantage of lack of transparency, as the viewer knows what she wants and there’s no possibility for backtracking outside her own shyness. It’s almost on the part of the audience to nudge her along as she slowly closes in on the subject of her curiosity.

And the romance! The setting! The colors! This film has the most romantic scene I have ever seen in film ever. Granted my experience with film likely doesn’t even eclipse 1% of all films, but nevertheless! To have it play with my emotions so easily, caressing me with the sweet affections of interpersonal connection and wholesome sublime is just… good. Amélie is very good, very emotional. All the emotions for your emotional needs, right here. It is, as seriously as I can make this statement with the power of my college-educated brain, a good. 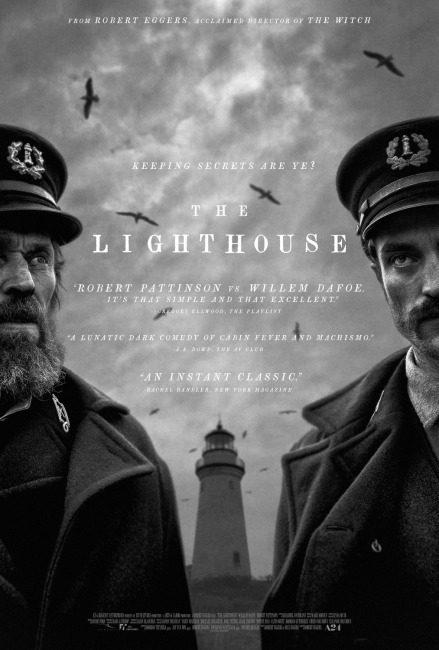 Featured on the decade list. An intense Gothic masterpiece featuring a lot of weird shit involving Robert Pattinson and Willem Dafoe acting out of their goddamn minds. Consistently eerie with just enough of a solid foundation of realism to make it both realistically unsettling and metaphorically ripe. A lot of shots are really captivating and disorienting all the same, allowing for a smorgasbord of emotions to flood one from beginning to end. Absolutely splendid. Thank you, Cinema Gods, for letting me see this in theaters.

The ratings for these titles and all others can be found on my letterboxd profile.