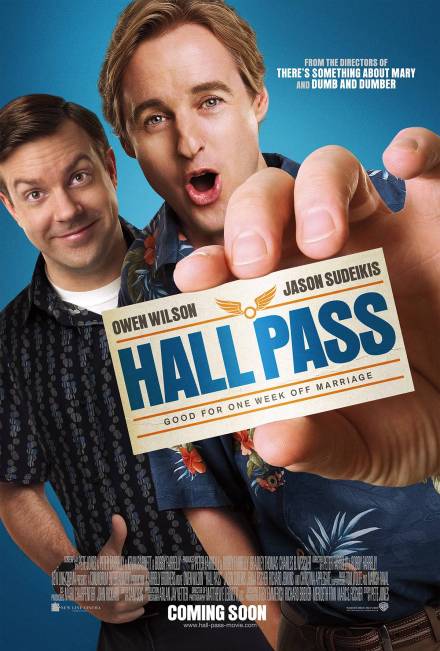 Somehow, I have even less time than I did yesterday. As such, I’ll try and keep this as smooshed as possible.

This is almost like a guilty pleasure for me. I rated it decently high 8-9 years ago (7/10), and though this film is a) not funny, b) not very creative, or c) kind of despicable for its questionable content, there’s kind of a dumb charm to it. For whatever reason, it was really cute to see Owen Wilson be a nice father, or have him be someone who’s the lesser of two evils; a relatable (to others, not so much me) figure who has problems that he needs to sort through. I am going to give this an unflattering score, but this is something that I never actively hated watching… mostly.

I have a personal vendetta against Jason Sudeikis. Unsure of where it came from, if I see him in a film, I figure it’ll probably be bad. To my knowledge, any film I have seen with him among the notable roles I haven’t cared for. I’m starting to think this is the film that started it, because he was amazingly unlikable here. Makes Owen Wilson look like an angel. Sudeikis’s character was by far the most annoying aspect of my viewing and he was always involved with the most unwatchable scenes. While understandable that his role is more comic relief, one can’t even take him seriously as a human being. He may as well be a cartoon character that Wilson’s character thought up.

If you’ve seen this before and despise it, bear with me here: I think there’s underlying worth here. It is very, very, very, very, very, very deep, but present. The glimmer of self-awareness that wants the viewer to understand that being “a man” prowling about town isn’t the kind of lifestyle that should be admired. Kind of. There’s a character who seems pretty happy with it that has nothing bad happen to him. Y’know what? Maybe this film’s just worthless. I don’t know, I have this weird desire to defend it from being viewed as worse than torture. I don’t think it should be viewed with the likes of, say, Adam Sandler comedies.

This is something I can see as a more casual filmgoer’s sort of preference. A pretty straightforward story about an odd proposal leading to some very loony situations. Owen Wilson is fine while Jason Sudeikis acts like an idiot asshole for 100 minutes. I even remembered segments of this from years prior as I sat down to view it again, so that has to count for something, right? Maybe, whatever. It’s pretty bad, even though I didn’t despise it.