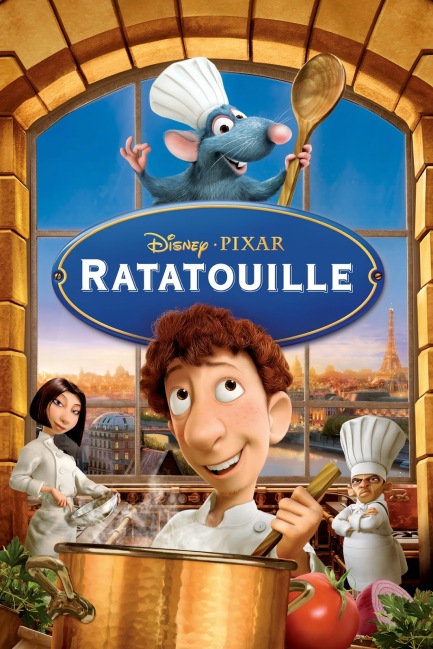 This post will be fairly short, as explaining the formula employed by Pixar in basically all of their films is immensely tiring and overstated by this point.

If you have seen a few, you have seen them all. Two characters of opposite qualities (whether personality, design, perspective, etc.) go on a journey of self-discovery, get mad at each other, then resolve things by the end. Not much different here, and that has diluted the freshness of everything under consideration.

What really strikes me specifically with Ratatouille are the minor occasions where this feels like its own thing. Metaphorically, the two leads go on a “journey” of self-discovery, but it’s more homey, more slice-of-life in its execution. The emphasis on feeling, subtle jabs at social issues, and the romance of the setting (Paris, France) gives this a bit of flavor compared to other Pixar works.

And perhaps more so than any other, the ending to this film really hits home with me (y’know, being a self-described critic). A moment of pure clarity, and the realization that cynicism is born from passion, even if twisted through years of underwhelming comparison. That ending review is, in a word, gorgeous. Not too complex and detailed, but gets to the emotional details with elegance that elevates the film’s memorability tremendously.

Everything else, though… meh. It’s Pixar—if you like their films, you’ll adore this. If you’ve seen a lot of them and are aware of templates they use to form their narratives and characters, this may feel somewhat dull. It’s a tad disappointing since I’ve heard this is a little less reliant on the formula, but from what I viewed, this still leans pretty heavily on them. It has cracks of excellence, which I appreciated and wished to have more of throughout. Overall, however, it’s Pixar. Pixar with a culinary punch, I suppose.