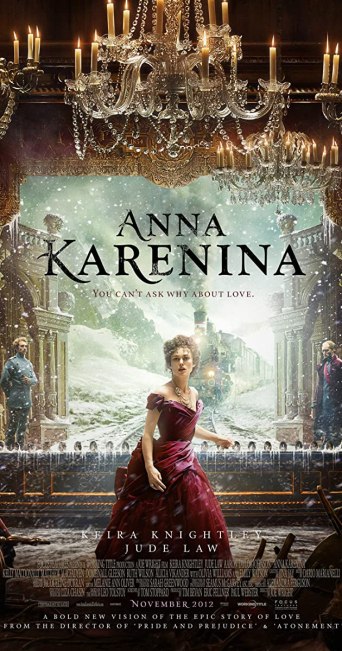 A final suggestion from a friend to cap off this year’s March of the Movies. It’s been a good one, and despite the circumstances surrounding the world, I’m glad with how it all turned out.

It’s very ironic that my last post covered a film that worked in grand, sweeping strokes that lacked in detail. Today’s film is basically the very epitome of it, though with considerable reason. This is (the 2012 version of) Anna Karenina, adapted from the novel that some critics consider the greatest published work of all time. I had never heard of it prior to last year—it’s not American or English, so go figure. The page count? As of the latest publication in 2012: 964. Tolstoy, have mercy.

This film is not three or more hours long; barely over two. A substantial amount of detail, along with a consistent pace, is lost to the desire to tell it all in a cozy enough runtime to not scare off potential suitors. There are times when I had no idea what was going on, other times I just didn’t care. Trying to weave a few different stories together in such a way and expecting the audience to have equal immersion in each of them is… bold, to say the least.

One thing I will note that was neat was the theatrical manner of its presentation… when it felt like it. Near the beginning, the settings and characters behaved as if it were within a stage play, with lots of moving parts and quick attire changes that settled into a comfortably quick pace. While a little taken aback by this, I eventually got used to it, only to have it slowly dwindle as the drama picked up. Where the beginning half hour has plenty of ambition and quirkiness to the stage-like presentation, the ending half hour barely has any. I almost would have preferred that the film kept this style of silliness—strange compliment as this word may seem—in a higher capacity. It was charming, and even a tad unique; the likes I rarely see in a big-budget film.

To reiterate, I had never heard of this story prior to last year. Everything that occurred in this film, I had no knowledge of. This is, for better or worse, my first exposure to the legendary story presented in the novel. Some things were likely changed (or butchered) to have them fit here, and the end result shows it. I found myself curious about the mindset of the leading Anna and her struggles with love. Fascinated, too, was I with Karenin’s struggle with his own love for Anna. Some scenes with Levin and Kitty were cute, but by the end, I cared nothing for them whatsoever. It all felt completely underdeveloped.

This film is the foundation of a larger, more interesting story. That’s what I got out of it, and if besides profit, the point of this was to draw interest in the novel source, it succeeded. As a noble sacrifice, the film’s weaknesses give reason to find true strength in a gargantuan novel’s wordiness. Almost spitefully, a filmgoer could go, “This is the legendary Anna Karenina? I don’t believe that, give me the book.”

And while I have not read the novel personally, I can recommend reading the novel over this with near-full sincerity.

An interesting way to end the March, I want to thank everyone for reading and those that suggested films for me to watch. I’m glad I didn’t pull out (too much) from re-watching the terrible atrocities that I somehow found pleasure in as a teenager. It will be one to remember, even if I can barely remember the months as much as the movies. To a happy April, and stay safe, everyone!