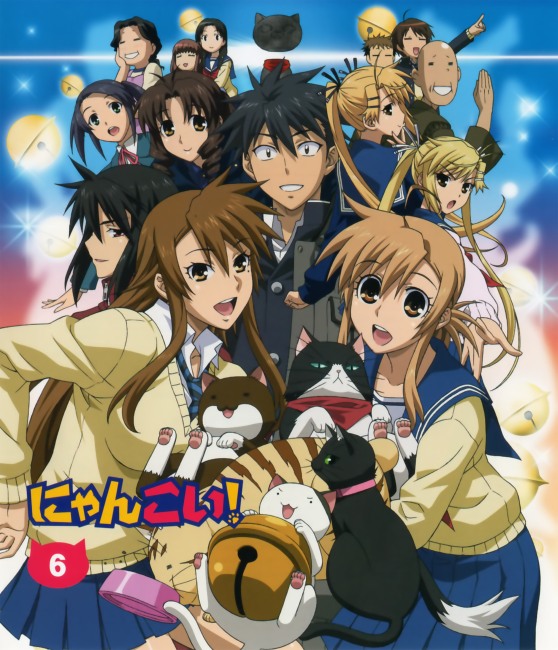 While there is no original “Thoughts on” post for this anime, I figured I’d list this as “Updated” since this is my second time watching it. It should also be noted that I did not re-watch the whole thing, as I dropped this ten minutes into the seventh episode. A shame, but not all that unexpected.

Interestingly enough, Nyan Koi! is a lot dumber than I remembered. Clearly within a mindset that everything occurring onscreen is really stupid and just rolling with it. Sounds like fun, and it is, but then it gets a little too ahead of itself. Inconsistent in energy, and just can’t help itself to appeal to the male libido in all of us when the scenarios begin to fall through.

The first, second, and, to some extent, fourth episodes of this are great. A chaotic energy that is showcased further by bouncy animation and a lot of character fervor, beautifully overexaggerative in execution. Remaining high-energy no matter the circumstances—realistic or not—gives this a certain appeal to those who enjoy entertainment without much of a point. A dude, allergic to cats, is cursed by a cat god statue that allows him to speak to cats. If he doesn’t help 100 cats with their troubles, he’ll turn into a cat himself, and with his allergies, this means death. Rather gruesome, which makes it all the more ironic that he doesn’t take it that seriously (and neither does the plot).

According to MyAnimeList, the Nyan Koi! anime began airing in 2009. The manga it was adapted from began publication in 2007, and, as of 2015, is “on hiatus.” This gives reason to believe that Nyan Koi! was adapted to anime form less than two years after the manga’s initial release, and that is not a good thing for the anime’s story. One can tell pretty early on that the lax atmosphere of the animated series will eventually give way to other priorities, as the focus on helping cats is pretty sporadic at best, and rarely addressed after a certain point. I do remember that the series ends on a cliffhanger, which, reading up to this point, can you blame them?

If the episodic nature of a silly kid helping out cats with petty issues doesn’t sound appealing, this series has you covered. With each passing episode, a slow-forming harem begins to form between the male lead and any female character he pays any amount of attention to. But wait! He actually has a crush on one female character in particular! Harem ruined, right? Well, it doesn’t stop Nyan Koi! from trying really hard. Much of this comes through the childhood friend tsundere character, who plays the role of “get mad at male lead for doing anything with another female” pretty by-the-nose. Other episodes tend to focus on a specific female character (or characters) that will eventually come to be among the harem, as well, with hints of affection near the end. And this is through six half the series!

But let’s get the kiddie (ha) talk out of the way: this anime’s for men. Constant drivel about how the male lead needs to “be a man” and do “manly” things, while the women should “be more feminine” and it’s weird if they’re otherwise. Taking place in 2009, this sort of obtuse observation of gender roles isn’t unsurprising, but it still leaves a bit of a nasty aftertaste to the otherwise inoffensive shenanigans that occur in—oh wait, there’s a lot of sexual fan service.

I’m beginning to understand why I wasn’t too overly fond of this the first time around. Growing harem elements as the story continues, lots of panty shots and any excuse to show women nude, and most of the stereotypical situations that occur from them. What started out as a fun, hyperactive series that adhered to the absurdity of the situation slowly became a common excuse for the oh-so popular soft-harem slice-of-life that continues to pop up every season. Or did… I admit, I’m not so up to date with anime releases of late.

Again, only got about halfway through the series with the updated mindset, so you’re welcome to see it as a review up to that point, though I doubt much changes past that. Started off pretty well, and the goofiness is still present even with all the sexy stuff. I’m just not really fond of all the dated societal stuff and the constant “wink, wink” from the animators regarding the intention of the female characters. If that isn’t a bother to you, this is almost recommendable in a sort of junk food sort of way. There’s no substance anywhere, but it’s humorous and entertaining. Good for a single watch.