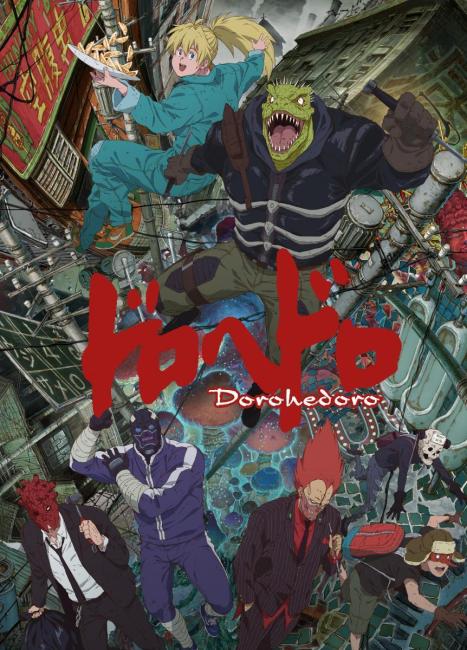 When you go into an anime adapted from a manga with an average score in the Top 100 on MyAnimeList’s database, high expectations are inevitable. Dorohedoro, to be frank, was appealing to me for its unique premise and lizard main character. This coming from the dude who watched Gaikotsu Shotenin Honda-san for similar reasons. (Skeletons!) Whatever happened, my feelings wouldn’t be shaped from experience with the source. I just saw a lizard and some freaky imagery and was intrigued.

I’ll state immediately that Dorohedoro is a very entertaining series, for whatever worth that may be to viewers. Its carefree nature in storytelling, character interaction, and comedic tone all counteract the obscene and graphic content that is normalized through the events of the series. A strange harmony is concocted that almost suits this grim premise of doom and gloom, where one’s line of thinking is almost never right. “The main character couldn’t possibly get his head chopped off h—oh, wow, the main character got his head chopped off. And then they play it off as a joke later on. What the hell?” (That’s not much of a spoiler with the context that he lives through it.)

What makes this anime particularly entertaining for me is the characters themselves, despite being quite a few within the main cast. I even remember all of their names (mostly through care, a little through constant repetition): Caiman, Nikaido, En, Shin, Noi, Ebisu, and Fujita. Hell, I even remember some side character names like Matsumura and Risu, which goes to both show how much characters matter and how often their names are stated. And in a world where everything is supposed to be shitty and corrupt, there’s no real clear antagonist to this story, even if the sorcerers are are made out to be. Everyone just kind of does their own thing, and the narrative cares less about building the world itself and more about how the characters see the world.

Part of the charm to the characters do come from the comedic atmosphere. Some bits are rather stereotypical anime decisions, including jokes about men retorting to women oblivious to their sexual appeal, and what have you. Others are more benefited by the impression that zero fucks were given, and that characters were allowed to do and say whatever they pleased at any given moment. Each have their roles, but they also vary considerably, showing that they have more than a single quirk and provide different things to the story. Caiman may be a food-loving, simple-minded oaf, but he’s also quite protective of Nikaido and often verbally expresses that she matters to him. En is an incredibly powerful sorcerer that manages a “family” of assassins, but also enjoys showing off through different business ventures, all involving mushrooms. A manner of “WTF?” humor with some consistency and heart.

What will ultimately detract the experience for most, if the CGI doesn’t already, is the story progression. To provide a slight spoiler, this series ends on a cliffhanger—it does not tell the whole story. Not totally shocking considering this is only a one-cour series adapted from a manga with close to 200 chapters of content, but nevertheless, sometimes it feels like it. Dorohedoro‘s story, in a phrase, is a horrid mess. Tons of different themes, exposition, selective progression, and pacing issues all zoom across the course of the series in a similar manner to its atmosphere. The series doesn’t care about conformity, unless it feels necessary, and that ends up going against the strength it could have as a story.

Certain sections of the episode count almost feel like years apart, when it’s likely just a couple days or weeks. The first few episodes feel very introductory, setting up the world of Hole and its inhabitants, while also elaborating on the human-sorcerer dynamic. Afterwards, characters become more important than the mystery presented with Caiman’s current form, though it doesn’t abandon it completely. Then Nikaido becomes important for a while, as Caiman sits back in the minor character department. Then the sorcerers get some attention. Episode seven is a baseball episode, because why the hell not? The focus is so erratic that it’s hard to feel impressed by anything of a serious nature that occurs, which only has me wishing for more goofy bits. That baseball episode, as cliché as it is, was more enjoyable than most other episodes, because it was stupid, just like this series.

This becomes a conundrum of preferences, whether characters are more important than story, or vice-versa. I adored the characters, and enjoyed the interactions they had with one another when not concerning sexualizing the female characters (shown a little more often than I’d prefer). If you feel the same about the characters making the adventure, you may very well find worth in Dorohedoro. If you’re going into this expecting some sweeping epic with tons of detail, you’re walking into a death trap.

Of course, I have to mention the amount of gore this series shows in vivid detail. People’s faces without skin, oodles of intestines, lots’a blood, occasional nudity (sans nipples), and obscene amounts of violence. I did mention earlier that Caiman gets decapitated at one point (and lives), so those with a very empathetic heart will probably die multiple times over watching this. I wouldn’t say this kind of unfiltered content is a benefit, though compared to a lot of series that typically shies away from the more gruesome aspects, it could be a benefit to those looking for that type of content. It’s nice to not be shown a bunch of random light censors and sudden shadowing.

Beastars will probably get the most credit, but Dorohedoro incorporates a whole lot of CGI into its animation that doesn’t look too bad in most cases. Personally, I wasn’t let down as much by the use of CGI as I was the series not aligning too much with the look of the manga, which is really sketchy, bold, and dark. Many of the characters’ visual build-up feels ordinary, despite the gruesome, decrepit settings, where as the manga has more visual distinction. I suppose I could praise the tons of different ways the series made me blink twice concerning what horrible acts of violence they decided to animate. Not amazing, not bad. Fine.

This is something I would recommend with a couple caveats. The excessive amounts of gore should be noted beforehand, along with the aloof narrative that it goes with. Characters are great fun, but the story is such a whirlwind of all sorts of different things that trying to keep up with everything will be the least of one’s issues. Painting it one way, Dorohedoro is like the ball in a pinball machine. It shoots in all sorts of directions in a fast pace that excites and thrills those that play. The lights that flash as things occur keep people invested and wanting to continue. By the end, however, what did it all mean? Some mindless fun? Nothing more? This is kind of similar, apparent with how the story ends. It’s a good time; it just may not last.