Some days ago, my brother and I, taking part in a franchise-viewing tradition, watched The Matrix trilogy. You all know of it, I assume? It was among the most parodied and profitable films of the late ’90s/early 00’s. It began a revolution among nerds and paranoid schizophrenics alike; a wave of questioning the fabric of reality and society as we see it. All emphasized with the sheer success of this movie franchise. And wouldn’t you know? They’re making a fourth one, because money is honey.

In my youth, I frequented Newgrounds quite often. For those unaware, Newgrounds is a site for amateur artists and flash artists to get together and showcase their stuff. Back then, it was a pretty vile place that got away with all sorts of nasty shit (think Postal levels of degeneracy), but nowadays, they’ve cleaned up their image quite a bit. Back in those wild days, I watched many videos by the top creators of the time. Among them were many homages to The Matrix, even if I wasn’t aware of said source inspiration. Going into this trilogy, my mind was subtly pondering how many Newgrounds references had spoiled the plot for me, and how much the “red pill” phrase, which internet culture has since accepted, plays into the plot. 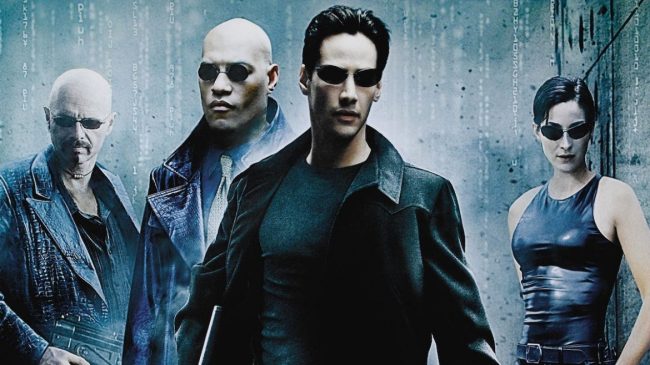 When I finished The Matrix, one thing kept imprinting into my mind: Star Wars.

The plot to The Matrix has a lot of similarities to the original Star Wars film. A lead protagonist wishing for a more fulfilling life. Being brought into conflict through the guidance of an instructor, who wishes to hone his abilities. A powerful, gigantic force (ha) of villains wishing for complete control. These and other minor details (which would require spoiling) had my brain continuously turning back and forth between established sci-fi cinema classics. I was watching The Matrix, but perhaps Neo was really Luke, and this entire thing was the result of the Terminator succeeding—wait, what?

This, unfortunately, ended up lessening the experience for me somewhat. This is, at its most basic form, an origin story. Have you seen basically any superhero film ever that isn’t a sequel? The Matrix is pretty similar in structure, and that prevented the ending portions (which were predictably cheesy and action-packed to mind-numbing effect) from leaving as much impact as it could’ve. Yeah, nice, I’ve seen this all before in plenty of others films. Not exactly the most interesting way to progress a plot anymore.

Although familiar, what ended up saving this was the execution of said formula. I described in detail to my brother after the ending credits that between the twenty-to-twenty-five-minute mark to just over the halfway point, I was heavily immersed in the plot. What the Wachowskis have done with the writing aspect is phenomenal, and the over-the-top psychological gobbledygook was great fun to let the mind digest. The scene between Neo and Morpheus when the latter was explaining in detail what The Matrix actually was was gripping, to say the least. All actors did a terrific job of giving meaning and importance to even the most far-fetched lines, and that helped immensely in making everything seem grounded and believable.

The other aspect many others credit with being innovative for the time was the action choreography. Notice how a lot of modern action films just have shaky cameras and a billion edit cuts to make it seem like a lot is happening all at once? Not the case here, where a lot of shots were done in a tight and fluid motion, requiring the actors to actually study and gauge how much to put into their movement. Now, yes, impressive as it is, I was never really blown away by it. I credit this to my general apathy towards action in general, but these sorts of scenes don’t really matter much to me without an emotional point behind them. Fighting a bunch of bad guys in a cool way is cool to those who believe it cool. I don’t really care. It’s action. (I would end up missing it in later films.)

I wouldn’t quite put it within “great” territory, but it’s a solid film with a lot of writing/action prowess that deserves the cult status that it has. I enjoyed it to a large extent, most so when they focused on building the world outside The Matrix and delving on the characters that make it up. Not the most fantastic ending, but a pretty memorable and relatively smart piece of sci-fi. Some of the special effects don’t hold up, though.

Bust out the champagne, everyone. This is where people will want it.

Just before, I called The Matrix “relatively smart.” The same can be applied to its sequel, only when compared to the original film. Relatively smart compared to the relatively smart original… I guess you should halve the relativity there. What Reloaded brings to the table is a far more expanded world outside The Matrix and the people organized in bringing about their own freedom. Reading impressions of it from people on Letterboxd, many were comparing it heavily to the Star Wars prequels. That was a striking warning.

The people of Letterboxd, you have let me down so often in the past. Yet here, you were so spot-on.

Thirty minutes in, so many wildly boring things had occurred. Establishing a home base, a hierarchy of command that Morpheus serves under, lots of exposition dumps and random characters never introduced prior (and one character mentioned dying offscreen), and an orgy. Then, when Neo visits “The Oracle,” a prominent character in the first film, I was invested once again. Afterwards, it was back to boring stuff. Then it was interesting in weird ways, and back to boring. I was riding a wave of immersion and boredom so strong that I really was comparing it to my experience with the Star Wars prequels.

Now this is podracing.

If you want to see the definition of a trainwreck, you look up this film. What a massively overhyped, incredibly over-the-top, and hilariously stupid film. Better yet, the wreck is saved for the very end. The ride is bumpy all the way, but the further it goes, the more the fire spreads.

The entire last hour to this film is some of the most boring, overexaggerated, and flashy nonsense I’m seen from a blockbuster sci-fi film. Lots of screaming, lots of “wow so cool” theatrics and framing. Race against time! The final duel! Encountering the impenetrable fortress! Neo turns into Kenshi from Mortal Kombat! Lots of dying people stating their last words in bated breath… Such a loony sequence of events.

If there are any redeeming qualities to this finish, it’s that it’s a lot of fun. Fun to make fun of, but fun, nonetheless. Some of the dialogue can still be… moderately interesting, but the wit from the last two films has devolved to dumb one-liners and a lot of sappy curmudgeon. And now my interest in discussing it is running thin, so I’m going to wrap this up. 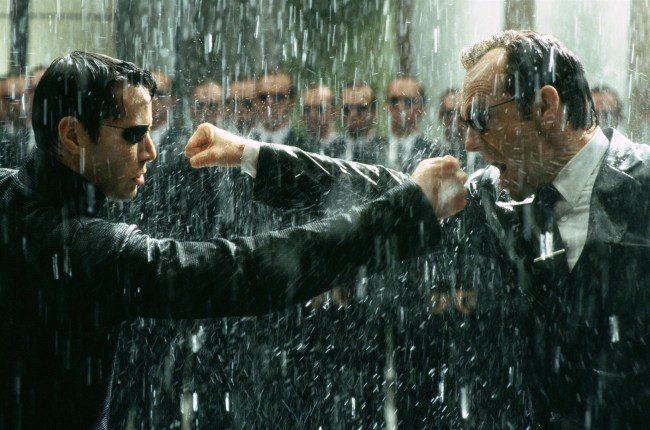 Callbacks to previous films, a buttload of CGI, a final, decisive battle with an overload ending; it’s too much. Too much everything, trying to cram it all into a two-hour film that features tons of characters we hold no qualms over. Had I seen this in the time it released and with my current mindset, I would be pretty disappointed. And hell, thinking on it now, it kind of reminds me of Rise of Skywalker—ironic that Star Wars comes up yet again. Just a complete clusterfuck of dumb, bad, and over-the-top theatrics. Gone are the intellectual stimulation and paranoia, The Matrix: Revolutions is a popcorn action film of the loudest caliber.

With the way it concluded, I can approach the inevitable fourth film in two ways: complete apathy (current path) or an opportunity to make right. With how the third film ended, it was a pretty potent punch to the mouth, so I can understand the desire to try and make it right. Even still, to do so so much later and in a cinematic culture of bringing back old franchises for the sake of it, it feels artificial, as well. However it may do, it will have to make an extreme impression on the world for me to be interested in continuing it. Three was enough.

What did you think of the franchise? Do you agree with my inputs?

For more articles like this one, feel free to check the associated archive!