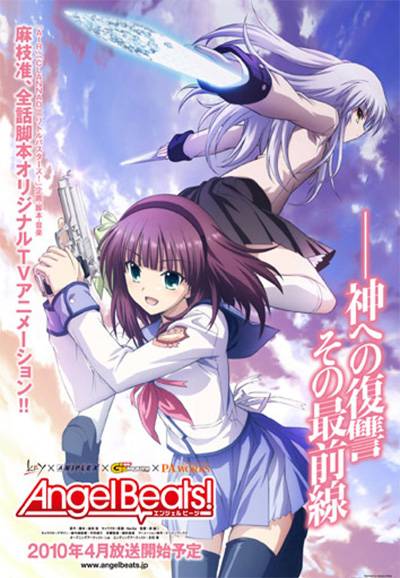 I first watched Angel Beats! back in 2013, three years after the absurdly popular anime hit the TV/computer monitors for the first time. I was aware of the massive hype around the anime going into it, letting it fuel my expectations for a modern masterpiece of entertainment and “feelzy” storytelling. Long story short, it wasn’t—and while I was taken enough by what I saw to give it a seven out of ten, I never had a real grip on how I truly felt about the series. Because of this (and the continued development of my hypercynical mindset), as time went along, I found myself more and more confused by the popularity of the show and ended up hating it due to oversaturation and spite. For a couple years now I’ve found every opportunity I could to shit on this show, regarding it as overrated, extensively overdramatic, and hardly worth the attention it gets. However, completely close-minded I am not, I knew that I had to re-watch the series to be totally sure of my feelings for it. Still, I couldn’t help grimace knowing the impossibly faulty mess I would be getting into once again.

It’s almost funny. There are times when I look back on my ratings for shows seen in the past and think to myself, “Why would I ever rate it that high?” More often than not, shows being viewed for their first re-watch are subject to score adjustments. More often than more often, that score goes down or remains the same upon finishing. Angel Beats! is no different here, as it went down a single number. Despite my confidence that the show was sub-par. Despite my annoyance with its popularity. Despite the fact that the story couldn’t fill a plothole to save its life. Despite everything else, I gave this series a six out of ten, which equates to an above-average, if not decent watch. Here’s why:

The importance of the story and its holes is something I knew was bad, and I knew would make the end of the series more painful to watch. What I didn’t expect was almost laughing at the anime’s comedy. Angel Beats! is actually humorous. The comedy has a great blend of slapstick, punny humor, and characters acting bizarre enough to fit comfortably in a bizarre world. Even better than this is the way the characters play off of one another. Y’know what’s amazing in anime? Mean-spirited camaraderie. I love when friends are complete assholes to one another. Calling each other idiots, criticizing their ideas and choice of words, beating the hell out of one another for the sake of dignity and masculinity. But in the end, their bonds are formed by their actions on the (hypothetical or not) battlefield, building trust through sharing a common goal. This anime has a wonderfully varied assortment of characters that bounce off each other like a veteran group of wise guys. It is immensely enjoyable to watch and makes the characters feel wholesome and charming without any need to develop them. Flat as they still may be, at least the viewer can look forward to seeing them onscreen.

As much as I highlight the holes in the plot, I was also surprised to see that the story is actually pretty decently paced (for a while) and well-structured. Nothing really feels out of place, every scene has a meaning or a purpose. Whether the goal is fleshing out a character, giving more insight to the world around the characters, or simply baseless filler, there’s a noticeable urgency to every little thing. I feel this can be attributed to Yurippe’s leadership, as every day’s a mission for her, which works well in the vein of the anime’s existence and timeframe. It’s amazing how every scene can be done well no matter what the general mood. Suspense and comedy especially are atmospheres that Angel Beats! thrives on. The first few episodes are more than worth watching, and had I not known what was to happen afterwards, I could see myself justifying the original seven out of ten, and maybe even more.

Even so, I knew it would all come to a halt as soon as the last five or so episodes began to play out in front of me. To be fair, with all the positives in play, it’s not that this span of episodes was necessarily “hard” to watch, but it didn’t have that same exuberant energy that it had before. One could also attribute this to a more delicate approach to episode structure, as the “dangerous” and thrilling missions of yesterday are all but fond memories now. The final stretch of this series focuses more on developing the characters to suit the goal of the changed plot, singling out various characters and providing very detailed backstories in the forms of flashbacks spanning anywhere from a few scenes to half an episode. I find this change in pacing a little abrupt, and while I like the characters enough as humorous pawns, to have them suddenly serious and sentimental is more than a little awkward. I was also somewhat surprised to see only a few characters really being developed. Some major characters will obviously see some growth, but others more shown for giggles are left out for the sake of providing more time for others. I am very disappointed that I never got to know more about the legend of TK. 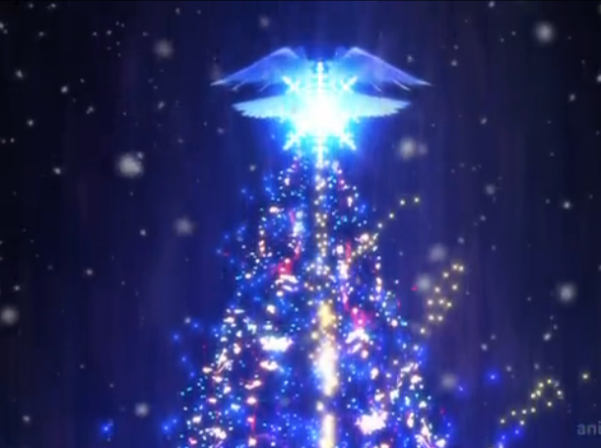 Halt it did, as the second to last episode is nothing short of a mindfuck. Not nearly the likes of Evangelion‘s final two episodes, but to the point where the script resorted to saying “I don’t know” to half of the questions being presented. It’s easy to get out of explaining everything if you feign ignorance. What is the purpose of their world? I don’t know. Why are things the way they are? I don’t know. Who are you? I don’t know. Who am I? I don’t know. It’s enough to know that the world is strange, plays by the rules of a single “God,” and has a set of rules that can be exploited for the sake of feelings and subconscious desires. Only thing is, when things like this come into play and people wish to have logical answers, it’s impossible, as one cannot logically articulate emotions. How is the world able to detect the highest peak of emotional acceptance within these characters? How are they able to freely choose to move on? How can anyone understand what I’m asking if they’ve never seen the series? That is the power of vagueness. Something this anime uses at its every convenience. The entirety of the twelfth episode was probably one of the harder ones to process. Mostly because it made little sense and offered nothing to the overall story.

There is both a good and a bad attribute about the final episode of the series, one of which surprised me further than I had been all series. The final farewells that inevitably manifest themselves throughout the anime (Need those feels somewhere) are surprisingly poignant upon the final episode. Despite these characters’ varying development, I found myself almost saddened by their final moments together. I suppose its the structure of the story that allowed me to be empathetic of the situation at all times, which coaxed me into believing the bond that these characters had with one another. Specifically, everyone except Kanade. Even by the end of the series, I had an emotional attachment to these characters. That really says something about how the quality of an anime can shine through a preconceived bias. That being said, the quality quickly plummeted through the ocean floor within the last six minutes of the final episode. One of the most abrupt reveal scenes I’ve had the “pleasure” of witnessing.

One thing I always knew was good, and is still good to this day, is the art direction. Angel Beats! looks like a big-budget movie over the course of thirteen episodes. The eyes have a glimmer of sheen to them that exudes an air of importance. The exaggeration of movement during comedic scenes and overall fluidity is usually top-notch. The number of environments and settings are well-polished and a lovely thing to take in. If there’s one thing I can recommend with this anime more than anything, it’s funny reaction gifs. I’ve seen a few myself, and they’re pretty good for what’s available otherwise. I really like the subtle changes in appearance during different scenarios, whether it be exploring characters’ pasts, change over time, or different attire for the sake of a cause. The anime on its own has a shininess to its palette, but the effort put into every integral scene makes the anime more than easy to sit through.

I underestimated you, Angel Beats!. Your sense of melodrama and numerous plotholes are among the only things that I can find wrong with your entirety. The rest is an enjoyable, fast-paced ride of creative whimsy and structured idiocy. If you haven’t watched it already, I would definitely recommend it. Despite all the flak I give it for being stupid and ending badly, the rest of the series has enough of a distinctive flavor to go above and beyond most other alternatives. I could actually feel the level of strength between watching this and, say, Koi to Senkyo to Chocolate. Almost like sensing the aura of a couple of seasoned warriors. In this case, Angel Beats! would be the young heir to the strongest of dojos; full of untapped potential and vivacity that’s hard to find in other warriors.