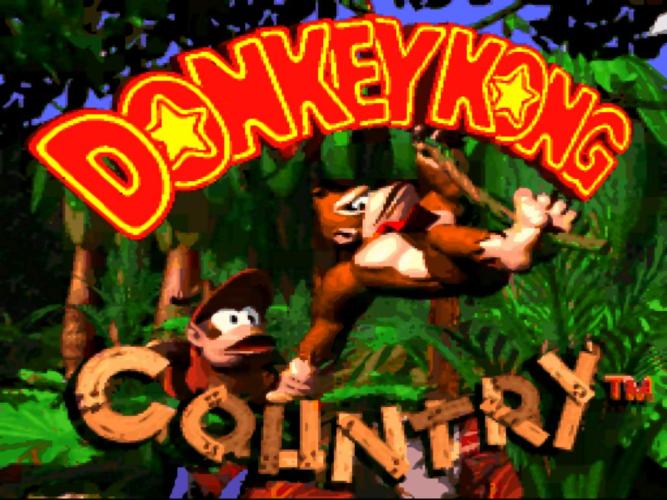 A quick disclaimer: Country Returns and Tropical Freeze will not be involved in this ode because, frankly, I feel they don’t have the same pizzazz to them that the original trilogy had.

For those who have read a good majority of my criticisms and thoughts, one would be familiar of the impact video games have had on my life. This ode in particular covers a certain series, a trilogy of fast-paced, action-platformers, that takes the honor of being the first game(s) I have ever played. Donkey Kong Country was within my hands before I turned four, and would continue to be in my hands for the rest of my life. Before I decided to write this, I went back and played through all three Country‘s to convince myself of how decidedly brilliant the games were to the cynical hare that I’ve become. To my own fervor, the games did not disappoint.

That is not to say, however, that the games are among the best Nintendo has ever made—oh, no. Donkey Kong Country in particular is a rather meager entry in the line-up, settling for the foundation of something great that Country 2 would embellish a year later. It’s almost like a work in progress; one can see the inner workings of Country and what it allows its sequels to do to improve the game upon itself. The game is still fun on its own and has a variety of different themes to later levels that make the game more crafty, though doesn’t incorporate enough of the little details to set it apart. The bosses are tremendously easy, some levels are over in a flash, Donkey Kong and Diddy are technically together, but can’t interact with one another; the bonuses have very little meaning, and I always found the soundtrack to be a tad lackluster. A few great tracks included with many more uninspired tracks doesn’t make a soundtrack great. All of these things drag Country down to be the weakest in the series. How ironic that the only game in the series where one plays as the titular character and it turns out to be the worst of the bunch. The game that everyone fondly remembers, the one that kicked the series into high-gear, the masterpiece proclaimed by Nintendo enthusiasts and otherwise, is Donkey Kong Country 2: Diddy’s Kong Quest. You did read that correctly, it is actually called Diddy’s Kong Quest, not Diddy Kong’s Quest. Because that would make sense. Despite the funky name, the game, as I alluded to earlier, takes everything that the original did correctly and nuked it up to maximum overdrive. The characters have more personality, the end of each stage rewards the player with a prize should they correctly time it, the Kongs can use each other to uncover secrets and progress more smoothly, and the music, the stages, and the overall atmosphere of the game does wonders on the soul of any gaming fanatic. There are very few flaws that Country 2 has to its name—flaws that may purely be subjective to the player’s tastes. There seems to be an energy to Country 2 that the original didn’t. It has this polish to it, this attention to detail and the desire to make as great of a game as humanly possible, that guarantees a load of fun for whoever picks it up.

It’s funny to think about the days when I found Country 2 to be my least favorite of the three. Country 3 had a nostalgic stake in my heart that couldn’t be moved, and the original actually had you play as Donkey Kong, so I felt it was better because of that fact. I was clearly deranged, because now Country 2 is easily my favorite. It’s really no competition. Perhaps it was knowing that Country 2 was everyone’s favorite that made me want to not have it be my favorite to spite them. I can be quite the hipster sometimes.

Yes, yes. The shiny game that has a firm grasp on my memory banks as the most time-consuming game of my very young childhood. Donkey Kong Country 3: Dixie Kong’s Double Trouble! is, one, a mouthful, and two, an interesting sequel to a universally-acclaimed masterpiece of game design. With such great success, how would Nintendo and Rare follow up on it? Well, they decided to continue the trend of Donkey Kong not being playable, as well as not having Diddy being playable. This time, we have Dixie Kong and… Kiddy Kong. Kiddy Kong, from what I’ve gathered on online message boards, comment sections, and various videos concerning the game, is not the most popular Kong in the family. Putting it bluntly, he’s hated for being a one-and-done addition to the series, appearing in zero games in the Donkey Kong series since. Why not just put in Donkey Kong to pair with Dixie to go save Diddy? I don’t know. The world doesn’t know. I’m not sure Nintendo or Rare even knows. Twenty years later, I’m not sure anyone even cares anymore. Well, perhaps still those old enough to remember hearing the news for the first time. 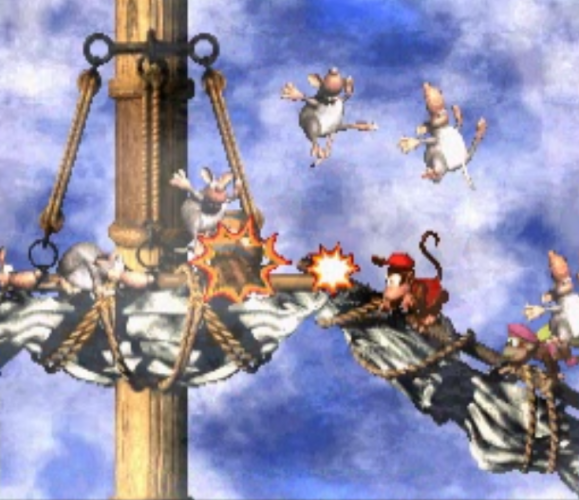 Odd character choices aside, Country 3 had quite the effect on me as the game I consciously remember playing many years ago. It was my first “real” taste of Donkey Kong Country and I instantly fell in love with the intricacy, the bright colors of the first world, and the catchy music pounding against my eardrums. To this day, the entire soundtrack to the first world of this game gets me into a nostalgic state of giddiness. It was such a wonderful start to my gaming experience that I almost felt spoiled without feeling anything but happiness. But that was then. This is now. And now, the game has become somewhat of a disappointment for my already sky-high expectations.

What could Rare possibly do to make this game better than the second? Forget making it just as good or paying homage, this is when video game designers wanted to exceed the quality set by games prior. What Rare thought was appropriate for such a challenge was to make every level as one-dimensional as possible. By this, I mean that every level has a sort of “theme” to it, a shtick that sets it apart from the level prior. At first, this isn’t really that big a deal, but signs show as early as the first world that things are a little out of whack. In Country 2, each world had levels that coincided with the environment it was placed in, with a few different settings to change up the monotony. In Country 3, it almost seems like of the five levels in each world, only two or three of them really match the territory, while the others simply change directions for the sake of being different. There’s this lack of consistency that bothers me. It isn’t too much of a factor, but compared to its predecessor, it stands out more than it probably should.

On top of this overload of creativity, if you wish to call it so, is the design of the levels themselves. A majority of them are pretty fun, with a lot of different distinctions from what the player would expect after playing the previous two games. However, some levels, especially in later worlds, are more frustratingly tough than eagerly challenging. Country 2 had very few of these levels, and were usually reserved for the last world. Country 3 has them peppered past world three or so, with an overload of them in the last world. The lightning strike level can go fuck itself. The reverse controls water level can go fuck itself. And the “kremlings with shields that knock you into bottomless pits” level can go fuck itself. Hard. It leaves a stain of frustration and fatigue that inevitably arises whenever one goes into the later worlds of the game. Not only that, but I found myself just wanting to clumsily speed through the level to beat it, bonuses and secrets be damned. It doesn’t do a game good when I never want to go back to a level after such a horrible handicap. 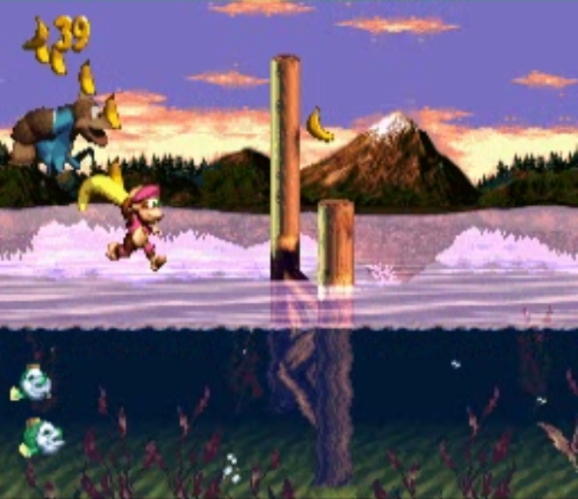 The “git gud kid” factor aside, Country 3 has a lot of charm and a lot of fun behind every stage. I only wish it had more consistency and perhaps didn’t try so hard to make levels as “out there” as possible. I really enjoyed the hub world (but not controlling the boat) aspect the game brought to the series, as well as Swanky’s Sideshow, even if the mode is relatively pointless. The number of bear characters inside their houses wanting specific items to trade for secrets and banana birds and what-not was fun as a kid, though I don’t care for it now. It feels thrown in. I don’t know. The secrets to find in the hub world make it really fun to explore, too. I’ve always enjoyed hub worlds in games (a la Sonic Adventure and Custom Robo), and Country 3 incorporates it wonderfully. Overall, the game isn’t as memorably good as Country 2, nor is it as fun, but it’s still much better than the first and still a good game overall.

The series overall is a treat to play through, and doing so should only take about ten hours of total playtime, depending on how good of a player you are. Not only would I recommend playing every game in the series, but I would also recommend playing them in order. The first is one everyone should start with, so to not become disappointed with the lack of functionalities available in the games after. The jump to the second game becomes all the more alleviating with all those noteworthy functions becoming available. And the third, well, it tries to throw everything at you, so best to be prepared by challenging yourself with Country 2. This series is precious to me, and will remain as one of my favorite video game series of all time. I wouldn’t go as far as to say its among the greatest video game series of all time—only that it is an immensely satisfying thrill to complete level after level with all those goodies left to find to satisfy your gaming pride.

The ratings for these titles and more can be found on MyVideoGameList.