I was genuinely surprised. After three years, I thought I would be able to go into this movie with a blank slate, with no emotions attached, aside from the (vague) memories I have of the parent series. For a while, I was right. The first twenty minutes or so was fairly boring. Nothing happened other than a few quirky scenes (with varying degrees of humor) and one character being a fuck-up. It wasn’t until Ohana found the old dude’s notebooks that the movie started to affect me. Oh, did it affect me. 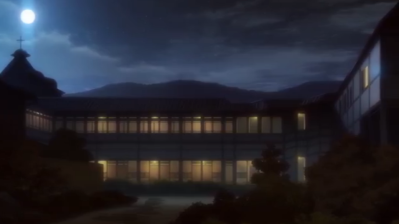 It’s unfortunate, because this could almost serve as its own movie. Change a few things here and there, and this could be a well-made standalone movie. But because it has a parent series, it’s almost required to view the anime series first, or else some of the characters antics and relationships won’t really make sense.

Personally, I like when movies that are adapted after a series ends strays a little from the original plot. When it doesn’t, it almost seems like “a movie made to please the fans.” Aka: fan service. It’s hard not to criticize this movie for doing similar, if not the same things the parent series does in terms of humor or plotlines. So instead of improving upon itself, it settles to remain the same. Like serving pizza for desert, after pizza for dinner.

Aside from the personal complaints, I thought this movie was a tad over-the-top. This is Hanasaku Iroha, so drama is inevitable. And with said drama, comes the standard cliches.

“Oh, this little bitch ran away. Let’s check the place where she wanted to go with her mom one time randomly but her mom ended up not being able to come because of work and- Oh, look! There she is!”

To be fair, this scene (and the entire plot focus at the time) was the only major drawback of this film (if not perhaps for the casual first twenty minutes). The other emphasis of plot revolved around how Ohana’s mother grew up, which I thought was immensely well done. Watching her mother grow as a person made me want to re-watch the original series all the more. Hanasaku Iroha can be a tad overbearing, but it knows how to tell a damn good story. I even considered the thought of imagining myself crying!

It was a sweet little hour of my time. It kinda made me regret not watching it immediately when it came out. However, I feel as though I wouldn’t have appreciated it then. The experiences I’ve had between 2012 and now have made me into a substantially different person, and I feel a lot more appreciative of honest storytelling because of it. Hanasaku Iroha has always been a contender for favorite anime. This movie is a good reminder why. I’ll have to see if it still holds up. Real soon.