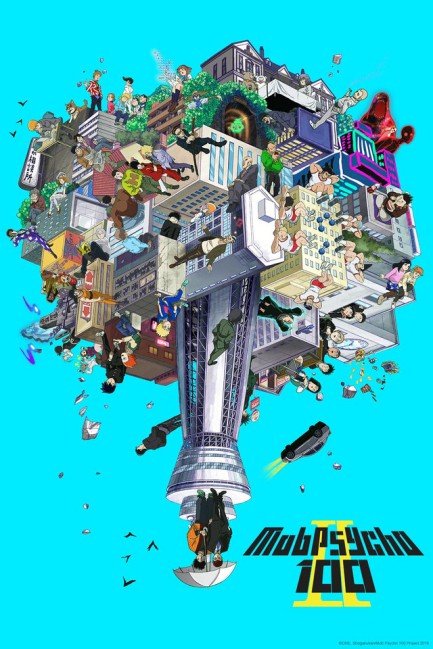 I was pretty entertained by Mob Psycho 100‘s first season. Based on its first episode (which I watched prior to leaving the show on-hold as it finished out the season), I wondered if it might take a more normal approach this time around. The episodes that followed only strengthened that assumption, before everything that I never would have expected came flying back at me like a punch from an esper god. My face still hurts. END_OF_DOCUMENT_TOKEN_TO_BE_REPLACED 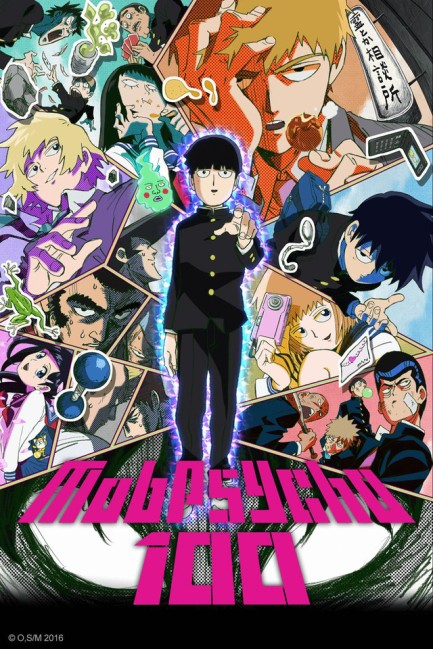 Don’t be fooled; this is no One Punch Man. Well, maybe a little.

Unfair or otherwise, Mob Psycho 100 will always be compared to One Punch Man. It features the same author, very similar art styles and humor, and nearly identical leads.  The only thing that really separates the two are the stories and the seriousness of the content involved. While One Punch Man is more geared towards parody and lightheartedness, Mob Psycho 100 turns a more serious leaf upon the unexplored consequences of having supernatural abilities. While Saitama uses his powers aloofly and concerns himself more over grocery store sales than enemies, Shigeo is more inward, self-conscious about his differing defining trait. Despite how similar these characters are, their difference in behavior alone creates a completely different atmosphere. 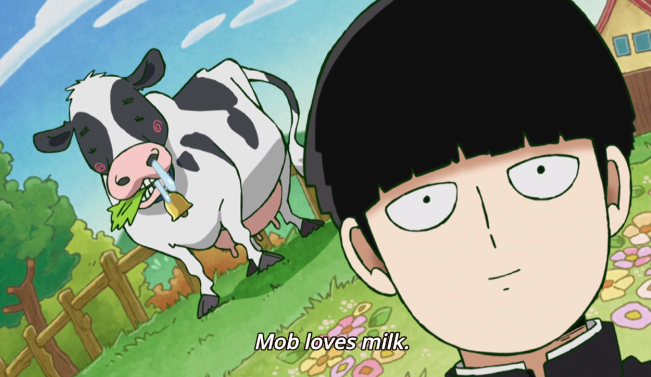 Before watching Mob Psycho, I saw one of the top reviews on MAL criticize the show for being “uncreative,” due to its similarities to One Punch Man. Seeing both shows, and over three-hundred others, I feel this is an unfair comparison, especially when the sample size is only two shows. Most authors with multiple works tend to draw inspiration from themselves and highlight what they’re good at more than anything; in this case, quirky design and animation with humor breaking common expectations. I could understand this criticism holding more weight if the author, ONE, had ten works instead of two that all followed a certain trend. The criticism doesn’t even hold much merit when compared to other anime before it, as Mob Psycho is a bit of a trendsetter in terms of characterization and artistic flair. There isn’t any anime that’s quite like Mob Psycho, except One Punch Man, of course.

Criticism should be exhumed, however, by the manner in which the series deals with its handling of introducing the “main threat(s)” of the series. Also similarly to how One Punch Man introduces its giant assortment of heroes, Mob Psycho has a number of threatening characters pop up one after another, quickly given info of their ambitions, lives, and defining personality trait, only to be blown to bits shortly (or eventually) after. This is primarily within the second-half of the show, but aspects of it appear around the fifth episode or so. In the past, I’ve griped about how shounen adore trying to introduce one strong enemy after another, then quickly make them human by justifying their actions—or sometimes not even bothering with that. It makes the action boring, the constant blabbering feels like a waste of time, and the mental checklist of the series gets a pat on the back before getting on with what everyone actually wants to see. Nothing fuels my boredom/irritation more than disingenuous execution. One might find it odd that I start with this of all things, but one must understand that this is, by all accounts, one of the most common issues I have with shounen in particular, and Mob Psycho is no different. It’s second-half feels a little inflated with the number of different themes it wants to present and carry through. Satisfying the shounen addict with cool action scenes and a central focus over a long string of episodes, all while continuously building upon the insecurity of Shigeo and his abilities. And the power of friendship, kind of. The strongest section of this anime is when it accounts for the budding insecurities of the central (or soon to be central) characters in Shigeo, his brother, and his classmates. While some feel incredibly rushed (Kamuro), others provide a lot of insight into caring for the characters and their pure-at-heart ambitions. Episode five in particular had just enough at stake to remain compelling throughout, and tests the will and the strength of a seemingly emotionless character, not to mention provides some more info upon the correlation between Shigeo, his powers, and his emotions. Episodes prior had a little of this, but also had a carefree feel to them that I enjoyed, relying a lot on character interaction and goofy humor to float by until the inevitable serious turn. With this serious turn, another inescapable issue arises.

One of the most important aspect of writing is the ability to express to the audience how or why a character is behaving the way they are. It creates a multi-dimensional relatability that the viewer can then relate to, creating a stronger emotional bond. Experts would advise writers this go by this very simple, but often difficult challenge: “Show, don’t tell.” Mob Psycho tells. It tells a lot. It tells so much that it makes me wonder if ONE is in love with being the link between the reader and the characters within the story, constantly butting in with monologues explaining exactly what’s going on both pragmatically and psychologically. This starts, ironically, in episode five, the strongest episode of the series. But they do so to end it, causing a thud of emotional release that’s timed perfectly with the “Explosion” that had taken place, while also providing a dark truth to Shigeo’s character. After this, however, it goes absolutely crazy with it. Like ONE really liked the ending to episode five so much that they decided to add it everywhere hoping for the same effect. It didn’t, in fact it got kind of irritating as most of what was said became redundant. I can see perfectly well the things that are going on and why a character is doing what they’re doing. Have more confidence in the visual effects of a character’s actions, ONE. Speaking of visual effects, Mob Psycho is often praised for being visually stimulating. I would agree to this, as the art style is distinct and offers a great variety of differing aspects that provide more charm to the humor, specifically. It’s also nice to see the appearance of some play into their characterization and the “breaking expectations” style of humor. The fight scenes are also quite bedazzling, though the fight scenes tend to be rather quick. Short and sweet. While the animation is typically fluid and easy to follow, there are times when the design of characters feels too lazy. Shigeo looks like Saitama, except with a head of hair. Simple lines for a nose, eyes, and mouth. Other characters hardly differ, especially kids from his school (outside delinquents and his club members). They all have this sort of distinct, yet familiar style of simple sketchiness. While it works, there are times when I feel they could’ve done more to make the characters more… attractive, I suppose. More appealing to look at, to go along with the amazing stunts that they’re pulling off. It goes better along with the humor, I suppose.

It’s a little disheartening to have a series end the way Mob Psycho does. Not because it’s a cliffhanger, but because it’s been done to death so often by others. Defeating the threat introduced halfway through the series, only to foreshadow the arrival of a bigger, badder threat whose power seems out of reach. While a certain character made the final episode feel all the more chaotically whimsical, it couldn’t escape the cliché clutches of the typical shounen ending. One could argue that this type of ending was necessary by what was presented and the arrival of a second season makes the issue kaput. However, I’ve always been one to judge a series, or any other subject, with as little outside information as possible, judging the subject for the subject alone—what it represents, embodies, and delivers of its own accord. The announcement of a second season isn’t going to make me feel any less unfulfilled by the first season’s ending. 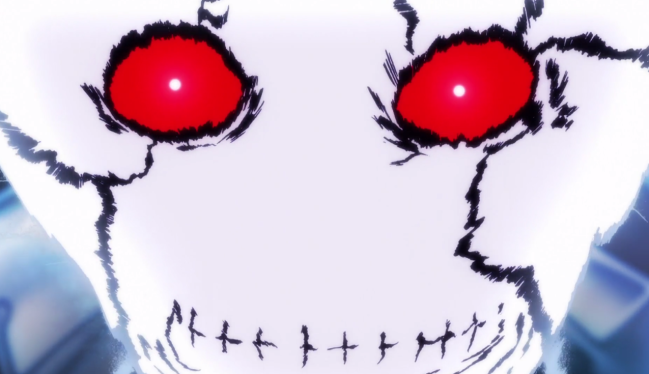 There’s a lot to like here, particularly with the emphasis on character and how the (first-half) story serves to make it more engaging. Animation is also a stimulating point, but I was (and typically am) less enamored with that than the weight underneath all of that. The second-half feels a lot more Naruto than Mob Psycho, and while that may cause a few to hiss, it does so with ONE’s signature brand of humor and wit… just with Naruto’s love of drawn-out pacing and enemy introduction/gloating. It isn’t nearly enough to derail the content into an unfathomable void of mediocrity, though it prevents it from being something truly marvelous. Mob Psycho 100 is not One Punch Man. It’s better, I think.