The most frustrating type of anime is the anime that varies in quality with every episode. It’s even worse when the anime has such wonderful potential, only to convince itself it has to stay a certain way as a means of procuring an identity. Tanaka-kun wa Itsumo Kedaruge, or Tanaka is Always Listless, is an anime that takes its central character’s less-than-energetic persona and smears it across the foundation of everything that occurs within its story.

This is another one of those “slice-of-life” things that I don’t seem to interact well with. However, it acts more like a sitcom than otherwise, with a shtick from one character that affects most (or all) of the characters around him in a school setting. Meet Tanaka, who is always listless. See what the title did there? Tells you exactly what to expect. He’s lazy, lacks the motivation to do anything, and will only expend energy to conserve his own future comfortable lethargy. He’s like a sleepy sloth, or a millennial without a phone. His lack of any passion translates to those around him, who either leave him be, help him with basic actions, or stare in awe of his mighty power of doing absolutely nothing.

I hope you like this joke, because this series really does. 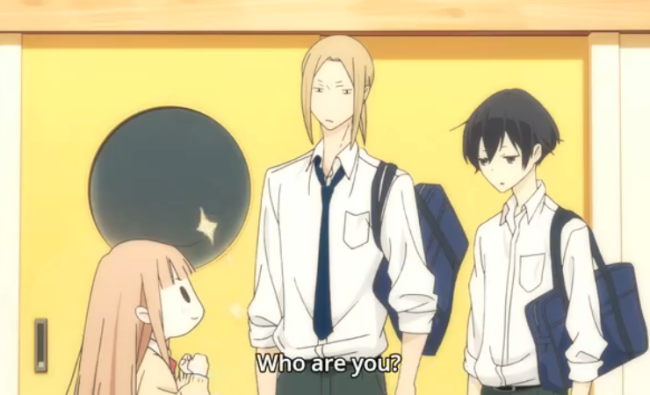 Aside from Tanaka, we have MOTHERFUCKING OHTA, THE BEST GOD DAMN CHARACTER IN THIS SHOW, WITH HIS SUAVE BLONDE HAIR AND MINIMALLY-DRAWN EYE STRUCTURE. HE IS TANAKA’S BEST FRIEND WHO HELPS HIM WITH EVERYTHING, EVEN RESORTING TO CARRYING HIM AROUND FROM PLACE TO PLACE. HE’S THE PERFECT WIFE, AND THE PERFECT PICK FOR BEST GIRL 2016. HE LIKES SWEETS, SICK BEATS, AND LAUGHING AT YOUR DEFEAT. I made two of those up, he just likes sweets. HE’S JUST A SIDE-CHARACTER, BUT HE’S MY MAIN MAN AND HE CARRIES THIS SHOW LIKE HE CARRIES TANAKA. SHOW SHOULD’VE BEEN CALLED “TANAKA-KUN IS ALWAYS RELYING ON OHTA-SAMA!”

The humor is what I hinted at above: Tanaka is always listless. However, it’s not always this way, amazingly, as some episodes focus on side characters such as Ohta, Shiraishi, Miyano, or Echizen. A lot of the charm from this show is seeing the side characters interact with each other, or with Tanaka. There’s something about this show that seems sweet compared to others like it. The characters seem more genuine, less of a joke. I think the characters are placed within a realistic world that they end up making silly with their own exaggerations. It’s somewhat refreshing to see a comedy only occasional bend the rules of reality to suit their exaggerated humor. It’s a calm and quiet sort of comedy, with loud characters making the most of it. That’s not to say this show is always funny (Tanaka’s shtick gets old after a few episodes), but the likability of the characters makes the jokes more amusing in the long-run. And that’s something I’d consider the anime’s biggest strength: it has a cast of (generally) likable characters.

This cast of likable characters is also what makes each episode so frustrating. There aren’t a lot of characters to this show, so what would be the harm in highlighting some of them once in a while? Of all the characters, I’d peg Miyano as the most one-dimensional, but Tanaka is a close second. Who is shown more than any other? Tanaka, of course. And he’s always listless. Ha ha. The prospect of Ohta having his own episode, interacting with people outside of Tanaka, or Shiraishi on the outside looking in to a group of friends she’d like to interact with more is such a fleeting pleasure. This anime’s keen focus on Tanaka tends to bring down the charm of the show overall, because it has a good cast of characters. It’s only a shame that it chooses to ignore them for Tanaka and Ohta going to a grocery store just to have Tanaka make six jokes every minute about how he wishes he weren’t there and he’s not used to walking around so much. Ha ha. 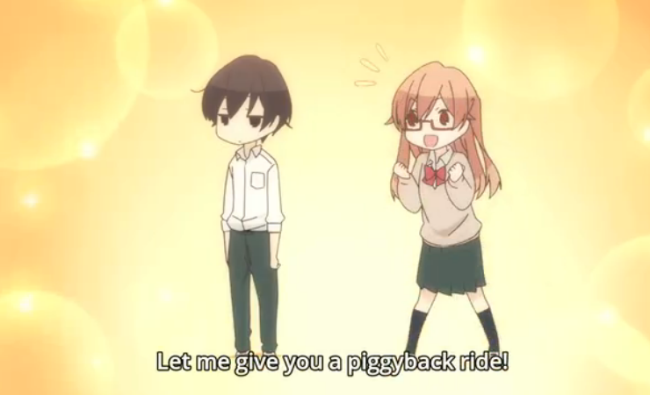 I’m torn on the art of the show, because it’s a little different. Pupils are H-U-G-E. Or perhaps they’re the corneas and the pupils are the tiny little dots placed in the middle. In any case, the characters’ eye color (aside from Ohta) take up a good portion of the whiteness that surround it, and also take up a good portion of the face, but not too much. Aside from that, design and animation are pretty standard. For 2016, it could certainly be better, but they went with the realistic/relaxing approach, so I don’t blame them. Plus, with Tanaka being less than animated, they can focus on scenes where he sits in his chair and does nothing for ten seconds. Way to eat up runtime without having to do any work, eh?

Sometimes it’s really, really good, and sometimes it’s dull. I recall episodes three and four to be ones that had me so enamored with the show that I was at one point pondering giving this series an eight out of ten. However, the longer the series ran on and the longer it decided to show more of Tanaka and Ohta together with no one else, the more my excitement for the series died down. Tanaka and Ohta have some chemistry together, but it’s exemplified with others, and when the two are alone, it’s basically Tanaka being lazy and Ohta reacting by saying how he shouldn’t be so lazy. While carrying him. It gets dull fast but the pain train of listlessness doesn’t stop for anyone. The author has a fetish for listless boys and listless boys have a fetish for staying in their comfort zones. And the structure of the anime had to follow suit. Ho-hum.