It’s almost like Pixar meets Cowboy Bebop. Two girls who don’t have much in common meet up to succeed towards a certain goal, meeting people and growing closer all the while. The goal is a man; a man named Hiroshi, who is supposedly the father of Hana, the blonde-haired heroine, and the ex-lover of Michiko, the tanned Latina(?) hot-shot.

Upon the first episode, this anime makes one thing perfectly clear: Hana is a poor, poor girl. In a classic Cinderella tale, Hana lives in an estranged home with eeeeeeeeevil parents and eeeeeeeeeeevil siblings. Of course, they aren’t her real siblings, but they’re more accustomed to using her as a slave. Something bad happens, they blame her. If they’re bored, they bind her with rope and use her as a horse. She’s constantly the scapegoat and the wicked use it to their full advantage. Pity her, you empathetic fools. Pity her and let the rage boil over so that you may embrace the dark side! This lifestyle doesn’t last more than an episode when Michiko comes flying through the window like a steampunk angel and takes her with her on a journey to find the man that will bring them all together.

If you’re perceptive enough, you can probably tell that I did not care for the first episode. It does not set a good precedent for the rest of the show and grossly overexaggerates the family torture Hana has to go through on a daily basis. All in the name of pity… or perhaps showing how patient she is by nature. In any case, based on the first episode alone, this show wouldn’t be anywhere near my Completed list. Thankfully, the show goes off on a tangent that only slightly gets pretentious with its narrative ambitions. 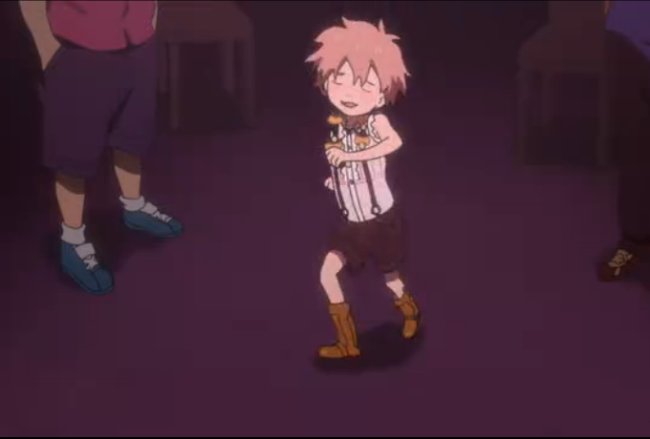 The story pans out similar to that of Cowboy Bebop. It continues with the couple’s journey with all sorts of rampant action scenes and wild goose chases, but only after sometimes dramatic, sometimes humorous character interaction between the main couple or the characters around them. Michiko to Hatchin does a good job of explaining character motivation through character actions and key dialogue, and allows a story to branch off with feuds between characters and/or (convenient) character arrivals with information about Hiroshi. It’s not a start to finish, straight line sort of story. Characters break off from one another and experience the world through their own eyes, and meet the people who inhabit it with all sorts of different perspectives… kind of like Cowboy Bebop. It makes the story a little more enriching when the characters try to find themselves through their individual thoughts, as opposed to relying on the closeness of others. The best thing is, the show does it both ways, so fans of either type can have something to sip on.

Stepping back to the action scenes and goose chases comes the first genuine issue with this anime. Guns don’t mean shit in this world. Characters are constantly running up into enemy fire and knocking them out of their hands and having “close-calls” with gunshot fire raining down on them. The characters in this show are afflicted with the, ahem, “Stormtrooper-Aim Syndrome.” No one in this anime is a good shot. At all. Despite being near point blank range, cops will miss a moving target ten out of ten times. This completely dulls the tension that gunfights could have, because what does it matter? They won’t get hit. Okay, these guys have guns. I better move fast so they won’t hit me! It’s horribly unrealistic and makes the scenes feel recycled and unnecessary. A gun fight for the sake of a gun fight. Plot armor abound because we can’t have Michiko die on us this quickly, can we?

Putting realistic action scenes aside, I think the character development is poignant enough to justify all the ridiculous “Danger moments.” Despite being almost certain no one will die (or even get hit), the viewer will likely care enough to not want them to be hit/killed. There’s a lot of parallelism between Michiko and Hana in terms of their personalities. Despite the fact that she’s around thirty, Michiko acts more childish than Hana does. Despite the fact that she’s ten, Hana is typically more level-headed and thoughtful of the present situation. But they aren’t completely different. They both share the same passion for justice and seeing things through, only their interpretation of the term “justice” varies from their experience in the real world. There’s also a nice emphasis on the symbolic nature of the quest itself. Is Michiko’s intention to find Hiroshi a means of letting go or never letting go? Questions like this pop up every so often during the narrative of Michiko to Hatchin. However, many of the more substantial questions are better served for the more major characters. Also like Cowboy Bebop, characters come and go throughout the story. Some episodes focus on a single character and then cast them aside for the sake of continuing the plot. Others introduce a character and sporadically give them development throughout the series. For the most part, the latter portion succeeds in crafting a likable product, but the former feels incredibly disjointed. Hana makes a friend named Rita near the halfway point of the series. Rita complains about how she loves an adult who doesn’t love her back and then joins Hana as they’re almost sold off as child slaves by a circus organization. After that, never shown again. Never even mentioned again. She served her purpose and now she isn’t needed. It almost makes those episodes dedicated to random characters like filler, and cuts the pacing of an otherwise well-paced journey.

Looking at Michiko to Hatchin is a lot like looking at a kaleidoscope. All sorts of different patterns and designs and colors floating around in a compressed space, constantly changing shape in a uniform-like fashion. In layman’s terms, I mean that the anime is consistent in its inconsistency. The animation, at times, is super choppy, stiff, and amateurish. Other times, the animation is smooth, fluid, and concise enough to bring a tear to my eye. (Disclaimer: no tears were shed during the viewing of this anime.) It has an issue with flip-flopping between the best animation ever and the worst animation ever. Fluid animation tends to occur when characters are moving fast, choppy animation tends to occur when characters are moving idly. Action scenes are nice, walking around a bazaar is not nice. It could certainly be better, but the overall design is enough to make up for it. I like the look of this anime. It’s different. Lots of darker-skinned characters you don’t normally see in anime, with a Hispanic flavor to it. If I could compare it to anything, it almost looks like The Boondocks off of Cartoon Network’s Adult Swim block. It has that same boldness to it, and I feel Michiko specifically looks like she could’ve come right from an episode of it. There’s a lot to like with this series, especially if you enjoy shows such as Cowboy Bebop (because let’s face it, these two series share a lot of similarities). It’s mostly indicative of whether you can enjoy a sometimes on, sometimes off journey of self-discovery and embracing THE POWER OF EMOTIONS. It doesn’t beat you over the head with it, fortunately. There’s a lot of moral codes and different forms of justice that impacts a lot of the characters in this series, and takes it on maturely and (moderately) realistically. I can say that I liked most characters in this show, even those who have a whopping one episode appearance. Whether or not I cared, frankly, is a different story. Some seemed insightful while others seemed evil to be evil, or good to be good. Or sob stories. Lots of those in here. Lots of those in Cowboy Bebop, too.

It’s a good show. I would certainly commend it for its effort in developing characters and creating an interesting story, but “originality” and “reality” aren’t two things you can give it credit for. It has its own charm both in stylistic appearance and passion for its craft. It’s a series that can be watched to introduce one into the anime genre without falling victim to many of the tropes that plague the industry today, and that alone influences me to rate the show higher.